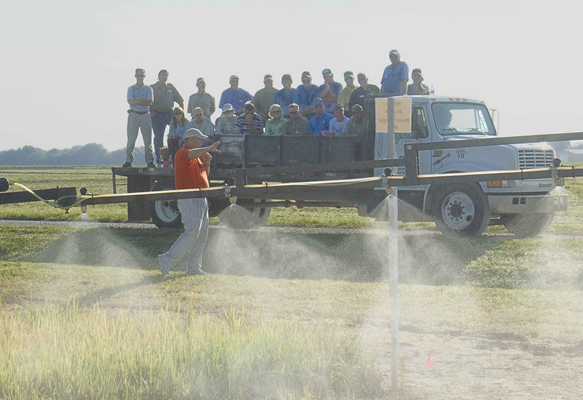 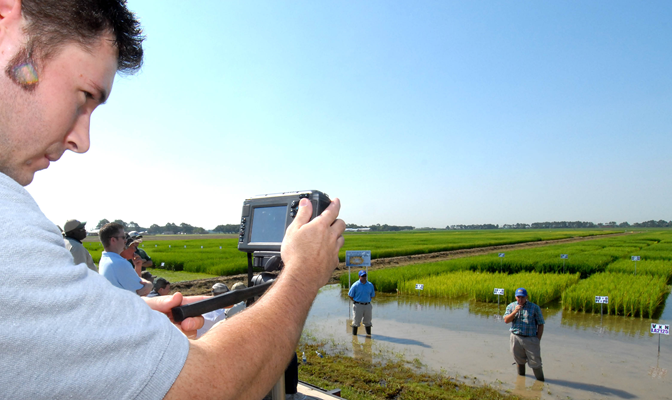 Adam Woerner, LSU AgCenter compressed video specialist, points a camera at Dr. Dustin Harrell during the recent Rice Research Station Field Day. The event could be viewed live on the Internet and is available for viewing at www.lsuagcenter.com. (Photo by Bruce Schultz) (Click on photo to download larger image.)

The event was the first LSU AgCenter field day that could be watched live on the Internet. LSU AgCenter technical staff used satellite equipment to have the field day video streamed in real time.

Dr. Steve Linscombe, director of the Rice Research Station, said he received e-mails from Colombia and Brazil from colleagues who had viewed the transmission.

Dr. Paul Coreil, LSU AgCenter vice chancellor for extension, said the capability offered by the remote system will be used at future field days. In addition, he said, it could be used in emergencies to keep a remote office connected to telephone and Internet service, with interactive video.

“It could virtually be an office on wheels,” he said.

Mike Strain, secretary of the Louisiana Department of Agriculture and Forestry, was on the program and said the most discussed issues today are food, agriculture, fuel and politics. He said America has to protect its agricultural base.

“See where we are with fuel,” Strain said. “We better not get that way with food.”

Strain urged people to remind legislators of the importance of the LSU AgCenter. “If we didn’t have the AgCenter, would you be in the rice business today? No you wouldn’t.”

He said the LDAF is establishing a fund to protect farmers who don’t get paid for their crop before a grain business goes bankrupt.

He said the farm bill calls for spending $289 billion during the next 5 years, but only 12 percent of that is aimed at commodities, and 69 percent is aimed at nutrition programs. The rest is for conservation, he said.

Dr. David Boethel, LSU AgCenter vice chancellor for research, said the Louisiana congressional delegation deserves credit for getting research money included in the farm bill. Some of the funds will be awarded through competitive research grants, he said.

“The panic buying has subsided, and things are starting to straighten out,” Johnson said.

Johnson said it remains to be seen which countries bought more rice than they needed. He said prices could drop by the time Louisiana farmers begin their harvest, but many farmers were able to put their rice under contracts for $25 to $30 a barrel.

During the field tour, farmers made stops at five locations to hear about research at the station.

-Dr. Eric Webster, LSU AgCenter weed specialist, talked about the problem of herbicide drift, which is becoming more widespread. He said many producers assume that a windless morning is the best time to spray chemicals, but the condition can result in herbicides being carried aloft as far away as a mile. Bob Scott, University of Arkansas weed specialist, said herbicide-resistant weeds are becoming more of a problem.

-Dr. Brooks Blanche, LSU AgCenter rice breeder and agronomist, shared his study of blending hybrid and conventional rice varieties. He said he has found a yield advantage. Dr. Don Groth, LSU AgCenter pathologist, said he doubts that the cercospera disease will be as bad as it was two years ago.

-Dr. Mike Stout, LSU AgCenter entomologist, described his work on controlling rice water weevils and stinkbugs. Stout said one study has shown that a shallow flood can reduce weevil populations by 20 percent. Dr. Natalie Hummel, LSU AgCenter entomologist, said an application has been made to extend the Section 18 permit for the Dermacor seed treatment aimed at weevil larvae.

-Dr. Dustin Harrell, LSU AgCenter agronomist, said he is continuing his work on fertility and stubble management. His variety and nitrogen trials use up to 210 pounds of nitrogen per acre for different varieties to determine the optimum amount. Dr. Tim Walker, Mississippi State University agronomist, discussed the use of a device that reads light reflectivity to determine where a crop needs more nutrients.

At the Louisiana Rice Research Board meeting after the field day, the board re-elected Jackie Loewer as chairman and Clarence Berken as vice chairman.