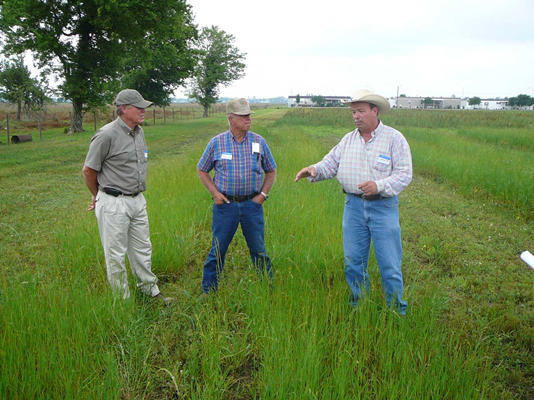 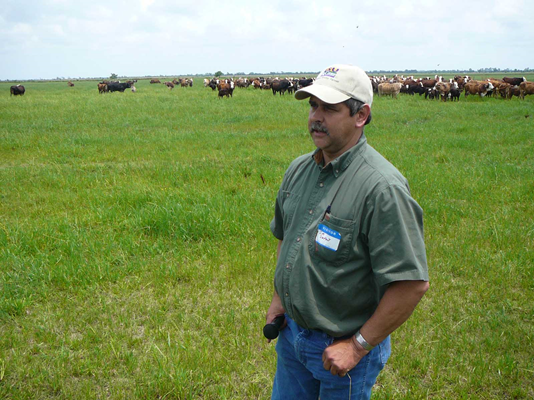 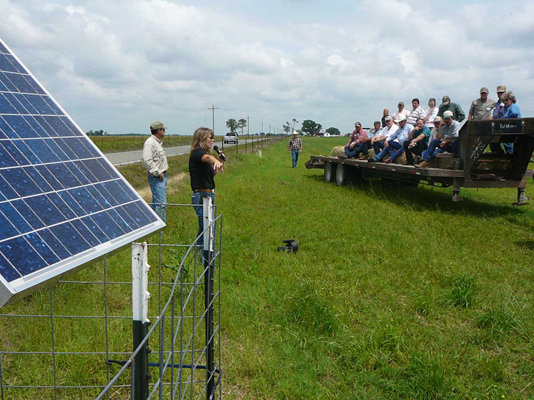 Participants at an LSU AgCenter Model Farm field day get a look at a water monitoring station installed on the farm of Jim DuPont. The station is designed to analyze runoff water quality.

LAKE CHARLES – Late spring through early summer is the best time to attack several weed species that infest pastures, according to Dr. Ron Strahan of the LSU AgCenter.

An LSU AgCenter weed scientist, Strahan gave an overview of weed control at an LSU AgCenter Model Farm field day May 4. The event started at the McNeese State University farm and ended at the cattle operation of Jim Dupont, which is designated as a Model Farm in the Louisiana Master Farmer program.

The field day was one of at least eight planned this summer as part of the Louisiana Master Farmer program, which requires participants to complete classroom educational sessions, visits to model farms and conservation plans for their own farms. The Master Farmer program is a voluntary certification program designed to teach farmers how to be better stewards of the environment while also maximizing the efficiency of their operations.

Among his comments at the field day, Strahan said briars are best treated in May and June. He said severe briar infestations in pastures may require two treatments with the herbicides Remedy, Cimarron Max or Crossbow.

Other specific comments on weeds in pasture from Strahan included:

–Horse nettle is a toxic plant in the same family as tomatoes. Cimarron Max and Grazon P+D worked best on it in LSU AgCenter weed control experiments.

–Vasey’s grass is a drought-tolerant grass common to pastures in the state. Strahan said glyphosate at the rate of at least 48 ounces per acre works best if the weed infestation is severe. Otherwise, wiping tall Vasey’s grass with glyphosate in a pipe wick has been a successful treatment that "selects" the weed out of the pasture.

–Smutgrass is one of the worst weed problems found in pastures, Strahan said. Velpar can be effective, but the treatment is inconsistent. The best time to spray, at the rate of 3 pints per acre, is in late May and early June when there is sufficient rainfall to get the herbicide activated, but livestock cannot graze on a field treated with Velpar until 60 days after application. Tilling a field can reduce the smutgrass infestation. Strahan also said smutgrass often gets out of control in fields that lack sufficient moisture, have compacted soil and have been overgrazed.

–Large Chinese tallow trees can be controlled with the "hack and squirt" method, Strahan said. In that method, a hatchet or machete is used to cut into the bark, and undiluted Tordon RTU is squirted or poured into the gash. As a general rule of thumb, one hack for every 3 inches of tree diameter is required, the weed control specialist said. Glyphosate and 2,4-D have not been effective in LSU AgCenter weed control experiments on tallow trees, he said.

Among his other comments, Strahan warned that shade from tall weeds will reduce bermudagrass yields.

"Bermudagrass is almost noncompetitive in shade," he said.

"Every time I come to one of these, I learn something," she said. "It’s like continuing education. You never know it all."

Richard is expecting to be certified as a Louisiana Master Farmer at this year’s Louisiana Farm Bureau Convention in June. She said the state’s Master Farmer Program has helped her obtain eligibility for the federal Environmental Quality Incentives Program, which provides cost sharing for cross fencing, soil testing and watering facilities.

She and her husband, Larry Richard, have 250 head of cattle.

As for the cattle producer hosting the event on his "model farm," Dupont said he likes to feed his cattle a cottonseed cake supplement in the fall, but with the decrease in cotton acreage expected this year, the price for that product is likely to increase.

Dupont’s farm is one of 11 in the state designated as model farms for the Louisiana Master Farmer program. At his farm, water quality monitoring equipment has been in place on one field for the past two years to measure the amount of nutrients and sediment carried away by runoff after rainfall.

"I find it’s the cheapest thing you can own," he said, explaining that it saves money for applying fertilizer and pesticides.

–May 11 – Gary Lirette farm near Marthaville.