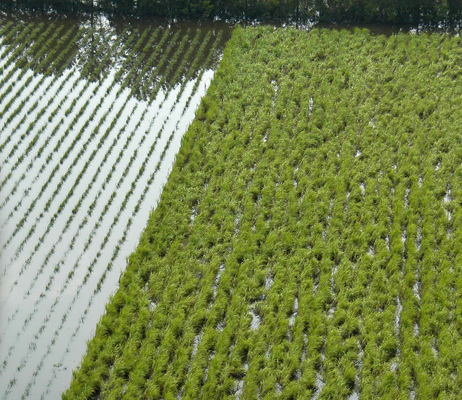 This flooded field of sugarcane east of Abbeville in Vermilion Parish was just one of many flooded after Hurricane Rita in 2005. Mapping work done by the LSU AgCenter is credited with helping cane farmers obtain disaster payments for areas that were flooded.

Work by the LSU AgCenter was instrumental in a U.S. Department of Agriculture program that has compensated sugarcane producers with $40 million for losses caused by hurricanes Rita and Katrina.

LSU AgCenter sugarcane expert Dr. Ben Legendre said payments were recently distributed, and he said several individuals in the AgCenter and other agencies worked to provide information that helped farmers.

"This was really a team effort," Legendre said.

Part of the compensation program was dedicated to losses from Hurricane Rita’s storm surge that flooded sugarcane fields. The LSU AgCenter, using geographic information systems technology, produced digital maps of the area inundated in seven coastal parishes. These were provided to the federal Farm Service Agency to determine which fields were flooded and to calculate affected acreage so sugarcane farmers could receive payments for their losses.

Willie Cooper, state director of the FSA, said the interagency cooperation involved in administering the program is not unusual in the state.

"Louisiana has the best working relationship of any state in the country when it comes to the agriculture industry – both governmental and non-governmental entities," Cooper said.

Without the LSU AgCenter’s help, the compensation process would have taken much longer and would have proceeded "case by case," Cooper said.

Meanwhile, Maurice Wolcott, a research associate with the LSU AgCenter and Louisiana Sea Grant College Program, who is skilled in geo-spatial systems, and Thomas Hymel, an AgCenter marine advisory and watershed specialist, compiled maps to show flooding based on GIS, high-resolution elevation data and observational data, such as high water marks and debris lines, collected by the AgCenter and the LSU Hurricane Center.

The work was later fine tuned from county agents’ interviews of farmers who provided information on where flooding occurred in cane fields. Farmer input was needed to help provide flood data at a level of precision needed for the disaster program.

"We did not have a single instance of a producer providing data that didn’t fit other corroborating elevation models," Hymel said.

Legendre said LSU AgCenter economists Dr. Mike Salassi and Dr. Kurt Guidry worked on hurricane damage estimates to the 2005 sugarcane crop and arrived at a figure of a total loss of approximately $282 million.

Wolcott said the AgCenter was designated by FSA as the official agency to do the mapping.

"It was pretty much a question of which entity had the capability and expertise to do it in a timely manner," Wolcott said.

"This is the first time an extension service has ever done the delineation for a USDA disaster program," Hymel said.

Bob Manuel, FSA program specialist, said this project was the first time geographic information system technology had been used for an FSA project.

Designation of the LSU AgCenter for the mapping work was an obvious choice, Manuel said.

"The AgCenter was chosen because they have the knowledge of the sugarcane area and geographic information systems experience," he said. "The arrangement worked out well, and they provided the USDA with critical data."

Wolcott said the work was a rewarding experience. "The sugarcane industry took a major hit, so to be able to help the producers was very satisfying."

Finishing touches are now being made on the map to determine areas flooded by Rita where sugarcane is not grown – from Lafourche Parish to the Texas state line. "When we’re done with that, we will have the complete line," Hymel said.

Benefits of the mapping work have gone beyond sugarcane. Using a powerful global positioning system and satellite data, forecast models were made to determine what would happen if specific areas are hit by the surge of a large hurricane such as Rita.

"All of our coastal parishes are vulnerable, and some are more vulnerable than others," Hymel said.

The modeling shows an 18-foot flood would put most of the city of New Iberia under water. In Vermilion Parish, a storm with 15 feet of water would flood most of Abbeville. Most of Franklin would be submerged with 10 feet of flooding, he said.

"The National Hurricane Center says this is something that can actually happen with a Category 3 storm," Hymel said.

The computer study also shows that the West Guide Levee of the Atchafalaya Basin would serve as a wall that would worsen flooding in St. Mary Parish, Hymel explained, adding that many levees in the Franklin and Morgan City areas would be overtopped by direct hits from Rita-sized storms.

The maps generated during this work were displayed in several parishes, and the information was used by emergency preparedness planners and people rebuilding their homes or constructing new ones.

"Everywhere we went, they appreciated the new level of knowledge we brought to their parish," Hymel said.