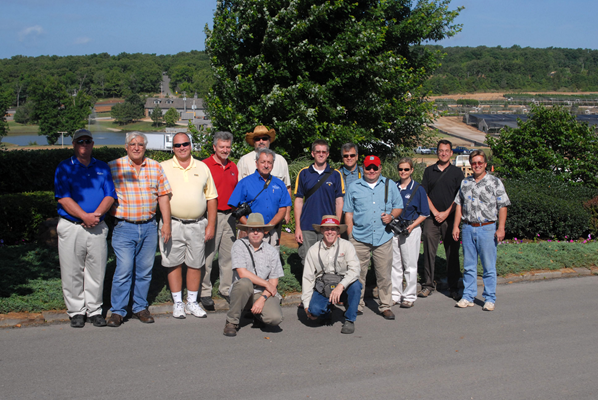 President (and local host) Jim Robbins welcomed everyone to the business meeting. The business meeting was called to order at 8:00 am on Friday June 12 at the Botanical Garden of the Ozarks in Fayetteville, AR. Members and guests were introduced. We thanked Scott Starr, horticulturist at the Botanical Garden of the Ozarks for providing a meeting facility. Allen Owings agreed to act as secretary for the business meeting due to secretary Alex Niemiera’s absence. Pre-meeting tours included an opening night reception at the Botanical Garden of the Ozarks, a visit to Greenleaf Nursery in Park, OK, a tour of Compton Gardens/Crystal Bridges Museum in Bentonville, AR and a visit to trial gardens on the University of Arkansas campus in Fayetteville. Thanks to local University of Arkansas faculty (David Hensley, Gerald Klingaman, Jon Lindstrom, and Garry McDonald) for their assistance with program efforts.

Minutes of the 2008 business meeting were reviewed and approved on a motion by Allen Owings and second by Todd West.

The group discussed the need to complete identification of SERA 27 evalauted plants that have become “mainstream” in the industry. Examples are ‘Jon Jon’ magnolia and ‘Pocomoke’ crape myrtle. Win Dunwell is to complete this listing.

Allen Owings presented the new SERA-IEG 27 website that is now being hosted on the LSU AgCenter public website. He will continue to add photos and information as it becomes available. Dewayne Ingram is to send a thank you letter to Bernice at Auburn University for her many years of maintaining our website.

Plant distribution for the past few years was reviewed. No plants were distributed/introduced for evaluation in 2006. We need to know who received ‘Duet’ Callicarpa and ‘Betsy Ross’ Syringa from Donna Fare (USDA) in 2007. Alex Niemiera recommended introducing ‘Jennifer Teater’ Parrotia in 2008 but lack of rooting success lead to this plant not being distributed. Win Dunwell planned to introduce ‘Blue Velvet’ Hypericum as KY0801 but it has been moved to 2010 for introduction. He also planned to introduce Hypericum olympicum as KY0802 but is was distributed at this meeting with WV, LA, MS, AR, and VA receiving plants to evaluate. Taxodium mentioned for evaluation by Mike Arnold several years ago were distributed this spring for evaluation in a number of states. This is a project being conducted by his graduate student Andrew King. Donna Fare reported via written communication that she has additional beautyberry and lilac that can be distributed to interested persons.

Jim Robbins is to pursue publishing an American Nurseryman article on SERA-IEG 27 and plants evaluated.

The group discussed future meeting site possibilities. John Ruter expressed interest in hosting the group in Georgia in 2010. This was a site on the future meeting list. Possibilities are Athens, Watkinsville and Tifton, GA. It was approved to meet in Georgia in 2010 on a motion by Ed Bush and second from Win Dunwell. Discussion of 2011 meeting sites were held with agreement to consider Morgantown, WV with Todd West as local host.

The group thanked president and local host Jim Robbins for his efforts in hosting the 2009 annual meeting. Being no further business, the meeting adjourned at 11:45 am.