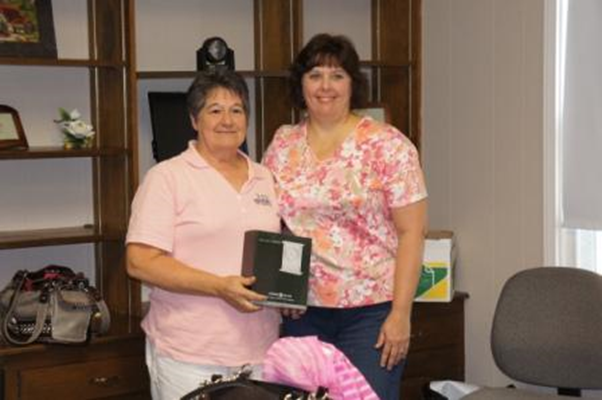 The Angela Hood Sunshine Award was established when we lost a member of our organization to cancer. Angela Hood was an active member who always had a smile on her face and was willing to do whatever she could to help anyone.

Nominations are taken from Chi Epsilon Sigma members in good standing. The nominee must have had one or more years of service with the LSU AgCenter and can be nominated by one or more of their coworkers. The nomination must show how the nominee exemplifies Angela’s sunny disposition and personality. It must also show how the nominee is willing to help coworkers and peers without complaining and how the nominee demonstrates friendliness, outgoing personality, and a can-do attitude. Former recipients may only be nominated after five years have elapsed since their award.

This year’s winner always has a smile on her face and a kind word for you. She is one of the sweetest, friendliest and most cheerful persons around. With her outgoing personality, she welcomes any and all members with enthusiasm and genuine friendliness at our annual meeting. She has always been willing to do anything to help our organization thrive and has done many tasks towards making our organization stronger. She has reached out to several members when there was a need and encouraged others to do so as well. With her sweet voice and sunny disposition you instantly perk up no matter the day you’ve had. She as that “let’s roll” type of spirit. She is the epitome of what the “Angela Hood Sunshine Award” is. She exemplifies Angela’s sunny disposition and personality, her willingness to help co-workers and peers without complaining, her friendliness and outgoing personality and can-do attitude.

The nominations for this award were all excellent and each nominee is truly deserving of this award. The nominees are: Cheryl Duplechain, Karen Daigle, Faye Ritchie with four, and Linda Mumphrey with two.

This year’s Angela Hood Sunshine Award winner is very much deserving of this award and was nominated by Danielle Bayham, Lainie Selle, Karen Daigle, and Jodi Davis. Congratulations Faye Ritchie.