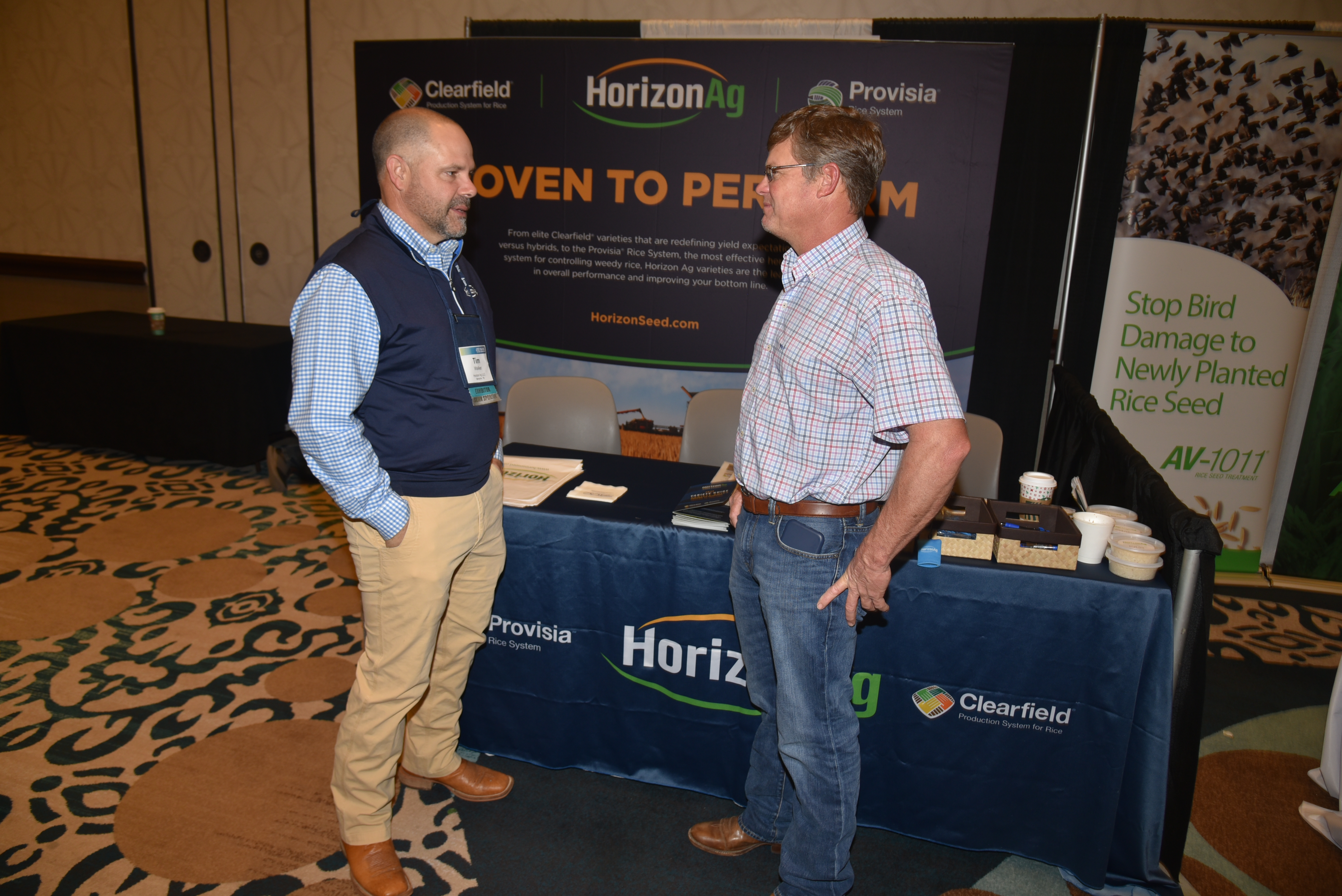 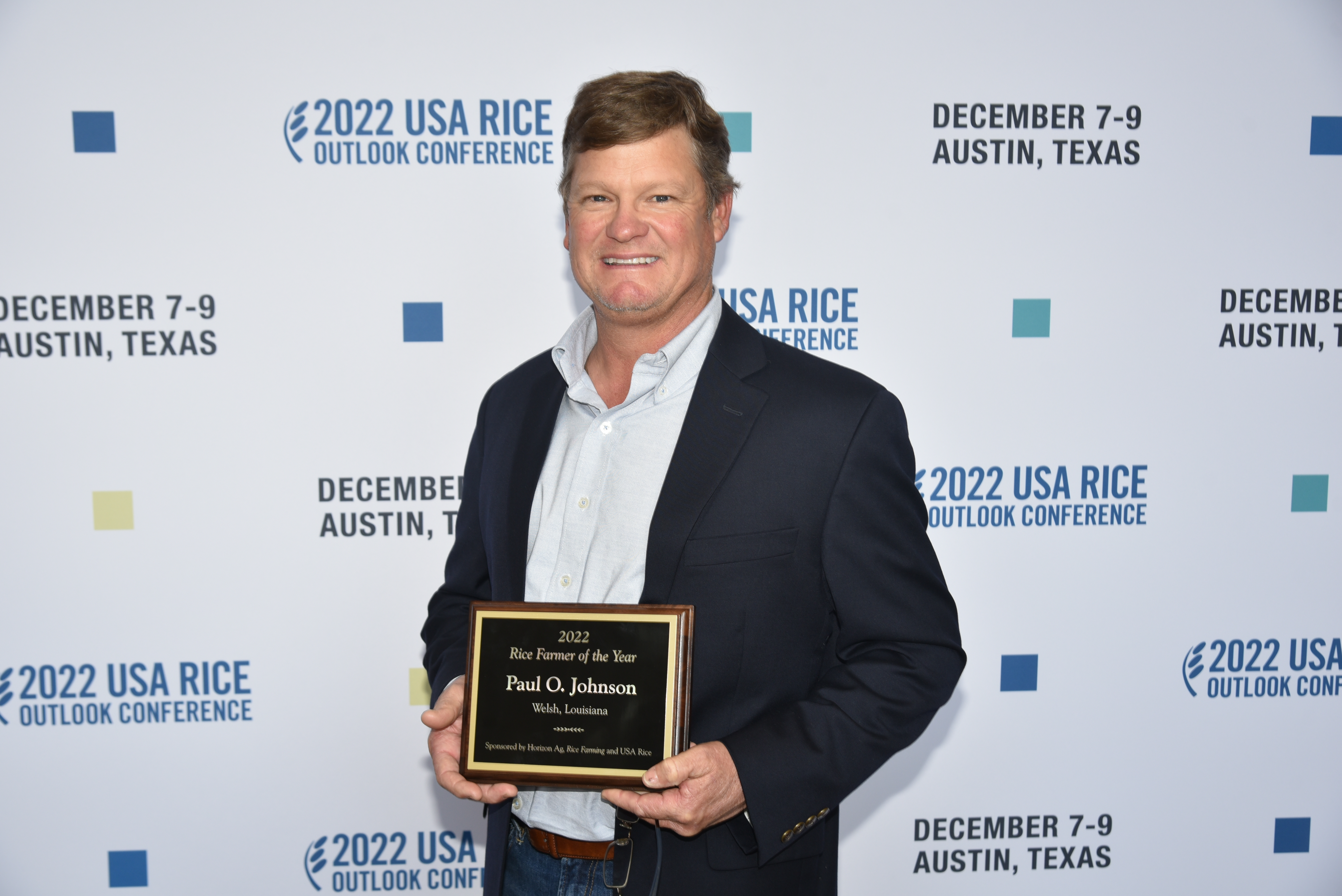 Welsh, La. rice producer Paul O. Johnson was recognized for his work in the state’s rice and waterfowl enterprises at the Rice Outlook Conference with the 2022 U.S.A. Rice Farmer of the Year Award. Photo by Derek Albert/LSU AgCenter

On behalf of the Morehouse Parish-based Kennedy Rice Mill, Meryl Kennedy accepted the 2022 U.S.A. Rice Sustainability Award at the Rice Outlook Conference in Austin. This marks the second consecutive year a Louisiana organization has earned this accolade as the Powell Group of Lake Charles was recognized as the 2021 recipient. Photo by Derek Albert/LSU AgCenter

(12/30/2022) AUSTIN, Texas—Tim Walker may not be from Louisiana, but he certainly has some vested interests in the Pelican State’s rice industry. As general manager of HorizonAg, his company has championed the Clearfield, then, subsequently, the Provisia systems that have proven to be vital to Louisiana’s rice industry. He touted these offerings from the HorizonAg display booth at the 2022 U.S.A. Rice Outlook Conference held Dec. 7-9.

The Outlook Conference is the premier national rice event that connect rice producers, millers, merchants, university and private-sector researchers and other industry professionals The wide array of regional rice industry representatives gathers to network, participate in educational programming, and plan for the coming crop year. The annual event’s leading offering is the trade show which hosts dozens of agricultural companies and organizations who all have one goal—to help the U.S. rice industry prosper on a global scale.

Walker took the reins at HorizonAg in 2014 after 14 years working as a rice breeder and agronomist at Mississippi State University’s Delta Research and Extension Center in Stoneville, Miss. Since then, he has navigated one of the nation’s leading rice seed distributors through the release of multiple rice varieties developed by the LSU AgCenter, like CL153, CL272, CLJ01, CLL17 and the latest Provisia variety-- PVL03.

The COVID-19 pandemic had halted the Rice Outlook Conference for a brief period, so Walker says it is refreshing to have the event in-person again.

“Even though we met last year in New Orleans, I’m still hearing people say that they are enjoying being back together to renew old relationships face-to-face,” Walker said.

Walker was joined at the HorizonAg event booth by Scott McClure, senior vice president of the Brighton Agency—a St. Louis-based marketing firm that represents HorizonAg and other agricultural companies. McClure explained why the annual Rice Outlook Conference is important to the agricultural products provider.

“We think of the Rice Outlook Conference as the kickoff to the new season,” McClure said. “This is a chance for HorizonAg to talk about what’s new, in terms of new varieties—what’s standing out like (CLL)16 and PVL03 because of the concern over weedy rice.”

Walker, and HorizonAg representatives, joined in on the conference’s Rice Quality Symposium which McClure said HorizonAg has been a big part of this year.

“The Quality Symposium id important because of the need for U.S. rice to be more competitive globally,” McClure said. “Tim and HorizonAg have championed that.”

2922 was the launch year for the third Provisia variety offering, PVL03, that was developed at the LSU AgCenter’s H. Rouse Caffey Rice Research Station under the guidance of Rice Breeder Adam Famoso. Walker said this variety, which was planted on approximately 79,000 acres in Louisiana this year, has lived up to expectations in yields and grain quality.

“It did exactly what we wanted, or needed, it to do out in farmers’ fields this year,” Walker said. It is the new industry standard for the new ACC-ase technology. “That variety for South Louisiana is extremely hot and popular.”

“Louisiana is extremely important,” he said. “A lot of that is due to the support of South Louisiana acreage. Our varieties are very popular down there and have been since the release of the Clearfield varieties 20 years ago.”

The success of the HorizonAg varieties is due largely, in part to the LSU AgCenter, Walker explained. With the progression of the H. Rouse Caffey Rice Research Station’s Rice Breeding Program from Steve Linscombe to Adam Famoso, the AgCenter has provided the lion’s share of varieties to HorizonAg.

“Since the beginning of HorizonAg, well over 80% that we have marketed have been developed at the LSU AgCenter there in Crowley,” Walker said. “LSU (AgCenter) has always done a very good job at releasing varieties that have broad adaptability and seem to fit very closely to what the end users are using, as well.”

Conference attendees were able to hear the status of Louisiana’s rice industry from AgCenter Rice Specialist Ronnie Levy. He explained to the growers and industry professionals from across the nation how Louisiana’s 415,000 acres of rice planted this year fared amid a late-spring and early-summer drought and how producers struggled through a soggy late-August deluge that delayed harvests and injured grain quality.

“Last year, we had optimum growing conditions,” Levy recalled to the audience. “We had clear, sunny days. We had no rain, and the temperatures were not extreme at that time of year. We had tremendous early yields in rice, but then it started raining. It rained every day, or every other day, for about three weeks in Louisiana.”

Levy explained that the summer rains caused lodging and disease to proliferate among acres that were delayed in harvesting causing a yield loss of close to 20% across the industry. Even with those harvest time calamities, Levy said yields were “pretty good.”

“What we anticipated were going to be record yields weren’t quite record yields, but were good when looking at the overall state,” Levy said. “We had somewhere around 154.4 bushels, or 42.5 barrels (per acre).”

For the upcoming growing season—that starts with planting in mid- February--Levy said he expects an slight increase in acreage. He said there may possibly be an increase of about 15,000 acres for 2023, but that depends on prices—the prices of inputs and the market prices offered for other commodities, as well.

The conference’s awards luncheon, sponsored by HorizonAg and Rice farming magazine, gave special recognition to a couple Louisiana rice industry standouts. First, Welsh rice producer Paul Johnson was recognized as the 2022 U.S.A. Rice Farmer of the Year. He was recognized for his conservation efforts of hir rice farming operation as well as managing nearly 9,000 acres of waterfowl habitat.

“I really cannot imagine anything better than receiving an award and being recognized by your peers such as I am with this award,” Johnson told the audience in his acceptance speech. “I don’t think there’s a better commodity out there than rice. I enjoy being a rice farmer and just appreciate all the selflessness that each of you give to our industry.”

Next, the 2022 U.S.A. Rice Sustainability award was presented to managers of the Kennedy Rice Mill. The company’s motto: “Our mission is to take a small grain and make a big difference, “was highlighted among the list of accolades earning the operation this award.

“Sustainability has been a journey and is a journey for all of us in this room,” said Meryl Kennedy in her acceptance speech on behalf of the Morehouse Parish company. “It’s really something we’ve been focusing on throughout the history of our company, but in recent years, we began to tell that story to our consumers…because consumers really care about the planet right now.”

Besides the dozens of Louisiana rice producers and millers in attendance at this year’s conference, other faces from Louisiana showed up to help represent the state’s rice industry. AgCenter rice breeders Adam Famoso and Brijesh Anjira attended to share the latest developments in the Rice Research Station’s Breeding Program. AgCenter Rice Agronomist Manoch Kongchum was on hand sharing his latest work in his study of greenhouse gases that are emitted during the growing season. Michael Deliberto and Brian Hilbun, who represent the AgCenter’s Department of Agricultural Economics and Agribusiness, were listening in closely to the conference’s general session where USDA Chief Economist Seth Meyers outlined economic trends that have shaped the industry markets in 2022. Local dignitaries such as International Rice Festival Queens Sadie Zaunbrecher and Kathryn Shea Duncan were on hand to introduce speakers and share the story of the Louisiana rice industry. Former LSU AgCenter Rice Specialist Steve Linscombe was an integral part of the conference as he hosted speakers and presentations on behalf of the Rice Foundation, which he oversees.

For the 2023 USA Rice Outlook Conference, Louisiana producers will have to travel a bit further to connect face-to-face with their national rice colleagues as the event is set for the same time next year in Palm Springs, Calif.

Walker tied together his opinion of the Louisiana rice industry with more than the ethereal market shares or rice seed volume figures that Louisiana rice producers are responsible for as they strive to improve their own operations. He explained that there is another component his company’s success in the industry throughout the state.

“The culture around rice in South Louisiana is second to none,” he said. “We certainly call a Louisiana rice farmer a friend, and we hope that they would say the same.”