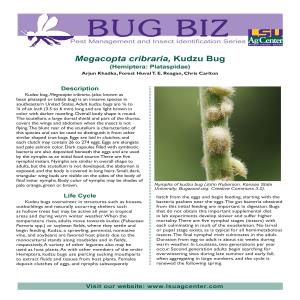 Kudzu bug, Megacopta cribraria, (also known as bean plataspid or lablab bug) is an invasive species in southeastern United States. Adult kudzu bugs are 1/6 to 1/4 of an inch (3.5 to 6 mm) long and are light brown in color with darker mottling. Overall body shape is round. The scutellum, a large dorsal shield and part of the thorax, covers the wings and abdomen when the insect is not flying. The blunt rear of the scutellum is characteristic of this species and can be used to distinguish it from other similar shaped true bugs. Eggs are laid in clutches, and each clutch may contain 26 to 274 eggs. Eggs are elongate and pale salmon color. Dark capsules filled with symbiotic bacteria are also deposited beneath the eggs and are used by the nymphs as an initial food source. There are five nymphal instars. Nymphs are similar in overall shape to adults, but the scutellum is not developed, the abdomen is exposed, and the body is covered in long hairs. Small, dark, triangular wing buds are visible on the sides of the body of final instar nymphs. Body color of nymphs may be shades of pale orange, green or brown.

Kudzu bugs overwinter in structures such as houses, outbuildings and naturally occurring shelters such as hollow trees but may be active all year in tropical areas and during warm winter weather. When the temperature rises, adults move towards kudzu (Fabaceae: Pueraria spp.) or soybean fields, where they settle and begin feeding. Kudzu, a sprawling, perennial, nonnative vine, and soybeans are favored host plants due to the monocultural stands along roadsides and in fields, respectively. A variety of other legumes also may be used as host plants. As with other members of the order Hemiptera, kudzu bugs use piercing sucking mouthparts to extract fluids and tissues from host plants. Females deposit clutches of eggs, and nymphs subsequently hatch from the eggs and begin feeding, starting with the bacteria packets near the eggs. The gut bacteria obtained from this initial feeding are important in digestion. Bugs that do not obtain this important supplemental diet in lab experiments develop slower and suffer higher mortality. There are five nymphal stages (instars) with each culminating in molt of the exoskeleton. No larval or pupal stage exists, as is typical for all hemimetabolous insects. The final nymphal molt culminates in the adult. Duration from egg to adult is about six weeks during warm weather. In Louisiana, two generations per year occur. Second generation adults begin searching for overwintering sites during late summer and early fall, often aggregating in large numbers, and the cycle is renewed the following spring.

Kudzu bug is native to India and China. It was first detected in northeast Georgia during 2009, presumably initially imported via shipping containers. Since then, kudzu bug spread rapidly into southeastern states and arrived in Louisiana during 2014. Kudzu bug is a notorious pest of soybean causing up to 60% yield loss if not controlled. However, in Louisiana thus far, damage is less serious than that caused by various stink bugs, and control options for kudzu and stink bugs are the same. Infestations tend to be cyclical during the growing season between soybeans and kudzu.

While most attention is focused on kudzu bug as a pest of soybeans, other legume crops may be at risk. Both nymphs and adults feed on leaves and stems. Kudzu bugs use their piercing and sucking mouthparts to extract the sap from the phloem of host plants. Economic damage is caused by necrotic lesions and reduction in pod development and overall growth. Kudzu bugs are a nuisance pest to homeowners because of their massive fall aggregations around structures. They produce a peculiar and offensive smelling defensive chemical and may stain surfaces, adding to the misery of homeowners. Kudzu bug infestations are often smelled before they are seen.

Kudzu was introduced to the U.S. for soil stabilization along roadways during the 1930s. The plant rapidly became a serious invasive species, smothering native plants and spreading uncontrollably across large areas of open landscapes. Thus far in Louisiana, kudzu bug is a relatively minor agricultural pest if it does not develop resistance to insecticides used against other sucking insects. The species may act as a beneficial nonnative insect in suppressing kudzu, although so far invasive plant and invasive insect seem to be getting along well with each other.

Scouting and monitoring. Monitoring for presence of nymphs or adults is key for management decisions. Sweep nets can be used to monitor kudzu bug densities.

Cultural control. Cultural control that includes cultivation practices is critical for management of kudzu bugs in organic settings. Earlier planted soybeans usually have higher densities of kudzu bug. Therefore, changing planting dates may help reduce pest densities. However, cost of delaying planting dates needs to be assessed before deciding whether to plant early or late. Some soybean varieties are tolerant to damage by kudzu bug. However, typically, damage limitation can only be accomplished by implementing additional control measures such as use of insecticides.

Chemical control. Chemical insecticides can help to control population densities of kudzu bug. Pyrethroids such as bifenthrin are effective in reducing populations and are often applied for stinkbug control anyway. Scouting and using established regional formulae to determine if and when insecticides should be applied are critical for success in controlling the sucking insect complex in soybeans, which now includes kudzu bug.

Biological control. Common generalist predators, such as big-eyed bug, minute pirate bug and various assassin bugs, have been reported feeding on nymphs and adults of kudzu bugs. Insecticide applications must be considered carefully and avoided if possible to reduce mortality of non-target beneficial insects. In addition, entomopathogenic fungus, Beauveria bassiana, can cause mortality of kudzu bugs.