Amblyomma americanum, or the lone star tick, is widely distributed across the southeastern parts of the United States. This species is a vector of serious diseases in humans and animals, including ehrlichiosis, heartland virus, southern tick associated rash illness (STARI) and tularemia.

The lone star tick is a brown tick with eight legs and long piercing-sucking mouthparts. Adult females are approximately 1/8 of an inch wide (3 to 4 mm), while the adult males are slightly smaller in length and width. Blood-engorged females can reach up to ½ of an inch (12 mm) in width. Sexes differ in appearance (dimorphic). Females possess a white dot on their dorsal surface behind the head. Males possess subtle tan to white markings along the edges of the body. Lone star tick eggs are minute, shiny, brown ovals that are laid in a large mass. Larvae are less than 1/25 of an inch (1 mm) wide and only have six legs. They are a light tan to white in color and have light brown legs. Larval ticks are often referred to as “seed ticks.” They are also frequently mistaken for chiggers, which are the larvae of thrombiculid mites, a very different organism. Nymphs are slightly larger at approximately 1/10 of an inch (1.5 to 2.5 mm) wide. Nymphal stage ticks possess all eight legs and are lighter brown than the adults.

Amblyomma maculatum, the Gulf Coast tick, is a similar species in appearance, size and distribution. Eggs, larvae and nymphs are nearly identical to those of the lone star tick. Adults of this species are also sexually dimorphic. Females are slightly larger than males and possess a small, white plate on their dorsal surface. The dark brown portion of the top surface (scutum) is significantly reduced in females, whereas males possess a scutum that covers the entire dorsal side. Males lack the dorsal white plate but have thin white lines running in various patterns along the body. The Gulf Coast tick is regarded by many entomologists as Louisiana’s most attractive tick!

Both species of Amblyomma are similar but have subtle differences. The lone star and Gulf Coast tick can be difficult to differentiate by nonspecialists, but both are common disease vectors in the southeastern United States.

Lone star tick adult females lay approximately 5,000 eggs after a blood meal. Eggs are normally laid in a large mass in a sheltered location, such as leaves or mulch, on or near the ground. Larvae hatch during the following days or weeks, depending on local conditions. Larvae go through a variable resting period before seeking out a warm-blooded host to obtain a blood meal. This is called “questing.” Questing behavior is specific to ticks and refers to scaling some vertical surface, such as a tall area of grass, to wait for a host to pass by. The larva latches onto the host and seeks an ideal position on the host’s body to attach and feed for one to three days. Hundreds to thousands of larval ticks may be present on a particular questing point, leading to large numbers of them on a single host. Following feeding, larvae dislodge their mouthparts and spend a period digesting the meal, then molt into the next stage as a nymph. Nymphal ticks search and quest in similar fashion until another host is found, though typically not in such concentrated aggregations as larvae. After feeding for another one to three days, nymphs dislodge, digest and molt to the adult stage. Following the nymphal molt to adults, females and males seek a host and feed for several days. During this period, they mate on the host. Fully engorged females will dislodge from the host, drop to the ground, and seek a place to lay eggs and repeat the life cycle. Life cycles of the two Amblyomma species in Louisiana are similar. Lone star tick larvae will feed on almost any bird or mammal, but adults prefer mammalian hosts.

The lone star tick is a serious medical and veterinary entomological problem because of its abundance in a variety of habitats throughout the southeastern U.S. It is a particular problem for ranchers, wildlife managers and hunters. Hundreds to thousands of nymphs and adults may occur on livestock ears, legs, abdomen and other short-haired areas of the body. This species also heavily utilizes white-tailed deer as a host. In addition to blood loss and resulting anemia, problems arise due to infectious diseases carried by ticks that can readily spread in large, dense populations of livestock and game animals. Although not always fatal, these illnesses can significantly affect the quality of livestock, resulting in economic losses. Examples include diseases caused by a number of blood-borne microbes, such as Ehrlichia chaffeensis, Ehrlichia ewingii and Theileria cervi. Additionally, “gotch ear” is a deformity of cattle ears in which the ears will thicken and curl because of tick bites, sometimes leading to tissue necrosis.

Both lone star and Gulf Coast ticks are a severe nuisance to humans in the southeastern U.S., though the former species tends to be more abundant in Louisiana. In wooded areas of Louisiana, outdoor workers, hikers and hunters commonly discover several ticks attached after only short periods in infested woods, especially in scrubby areas with dense underbrush. Bites are red and painful, and disease transmission is possible. Several pathogens have been transferred to humans, resulting in mild to severe symptoms that can be short-lived or long-lasting. All the diseases listed above, including others, can infect humans. Although fatalities are rare, they are possible. Anyone who suffers tick bites should self-monitor for symptoms of disease and seek medical treatment promptly in the event of unexplained illness. Fortunately, two serious tick-borne diseases, Rocky Mountain spotted fever and Lyme disease, are not known to be vectored by either lone star or Gulf Coast ticks.

Monitoring and prevention. Monitoring for both tick species, and ticks in general, use similar methods. Wear long sleeved clothing when outdoors in dense brush or wooded areas. Always remove clothing following exposure and check all areas of the body (mostly thin-skinned areas) for signs of ticks. Additionally, removal of leaf litter and brush adjacent to wooded areas in yards can significantly reduce survival of ticks through the winter and minimize chances of picking them up during seasons of activity.

Natural control or sampling. Although traps made for both tick species are mostly for research purposes, homemade traps can be created by assembling a cooler with dry ice, lined with double-sided carpet tape. Nymph and adult ticks are attracted to the carbon dioxide from the dry ice. Another method is to use a large cloth and simply drag it over an area with dense brush to prompt ticks to attach in response to movement. Areas with large densities of red imported fire ants (Solenopsis invicta) often have few ticks due to the ants’ predatory foraging, a small consolation for those dealing with fire ants.

Chemical control. Control methods used on other tick species may be used on lone star and Gulf Coast ticks, although not all are effective. Outdoor workers and enthusiasts, hunters and homeowners in wooded areas can wear permethrin-treated clothing or repellent sprays containing DEET. Formulations containing higher concentrations of DEET than typical mosquito repellent sprays may be necessary to repel ticks. Results of chemical treatments and repellents are highly variable, but these two options are the most effective to date. Be sure and follow legally mandated label directions when using insecticides and repellents. 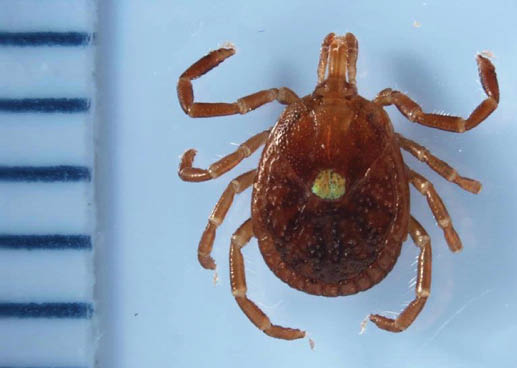 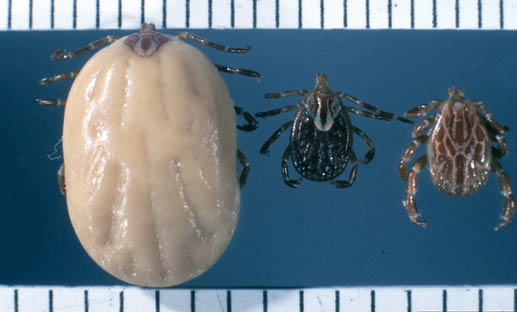 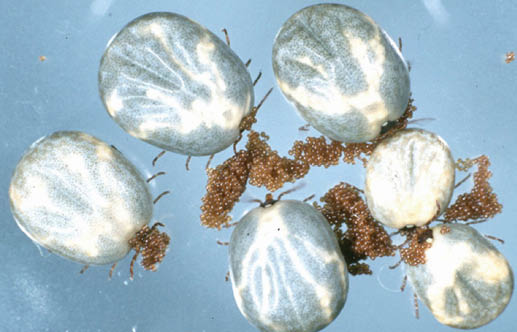