The United States is the second largest importer of tea, with a market value at $13.1 billion in 2021, according to the Tea Association of the U.S.A Inc. The tea plant, Camellia sinensis, can be grown in many areas of North America, especially the southeastern region of the U.S.

According to a recent online tea industry survey conducted by a group of university researchers, currently, there are about 60 tea growers in 15 states, of which 80% are family-owned small farms that are fewer than 5 acres, and 56% were established in the last 10 years.

Specialty tea, or loose-leaf tea, is the most profitable category for domestic tea production compared with the supermarket, ready-to-go and food service categories. Though the number of growers and total production has seen significant increases, U.S.-grown, loose-leaf tea only is a negligible fraction of the specialty tea market, accounting for $3.1 billion in 2021.

For the next several years, the demand for tea in every category mentioned above is projected to continue their trend of increase, especially loose-leaf tea, according to a 2021 study by the Tea Association of the U.S.A Inc. It seems that now is the best time ever for prospective producers to consider adding the tea plant to their production. However, there are still many challenges, concerns and barriers for the domestic tea industry to further develop and build its production base. Extreme climate events and a lack of regionally specific recommendations on variety, soil fertility and nutrient management practices are among the top prioritized industry needs.

Full-sun radiation and heat during the Gulf Coast summer months may adversely impact the quality of tea leaves. Shade treatments may effectively improve tea quality through suppression of flavonoid and lignin compounds that are associated with bitterness in tea leaves grown in full sun. In 2021, AgCenter researchers conducted a temporary shading study to evaluate how 40 days of shading during the unfavorable summer growing season would affect the content of desirable chemicals, such as caffeine and the antioxidant epigallocatechin-3-gallate (EGCG), in harvested and processed tea products.

A full-sun tea field at the LSU AgCenter Hammond Research Station with the variety Georgian Tea was used in this study. Treatments were applied from mid-June to end of July and included 0%, 40% and 80% black shade cloths. There were four 10-foot-by-30-foot plots used for each treatment, with seven to 10 tea plants in each plot. Actual levels of shade were measured by a photosynthetically active radiation (PAR) sensor.

At each harvest, fresh tender shoots were processed into white tea and green tea following the methodologies growers are using. A total of 36 samples each of white tea and green tea were stored in a refrigerator for a month before being analyzed for caffeine and epigallocatechin-3-gallate (EGCG) levels with high-performance liquid chromatography (HPLC).

Results indicated that concentrations of the antioxidant EGCG in green tea samples were reduced by the shade treatments but returned to pre-treatment levels at 35 days after the removal of shade cloths (Figure 2). This shade effect on EGCG was unexpected because biosynthesis of catechins is mediated by photosynthesis, and reduced photosynthesis under full sun was expected. Thus, there is a lower EGCG concentration under full sun and improved (higher) concentration when some shade is provided. EGCG is one of the chemical compounds that will give green tea its unique gentle flavor and is highly desired for both flavor and health benefits.

During the shading treatments, white tea samples from shaded plants had lower caffeine concentrations regardless of shade levels. And in general, caffeine concentrations in white tea samples were higher in those harvested before shading treatments began than those harvested 35 days after shade cloth removal (Figure 3). These results were expected and similar to previous findings in other studies. Caffeine concentrations in tea are in general much lower than coffee (20% to 25%) after brewing; however, knowing how manipulating light may affect its levels is important for labeling and marketing.

From this preliminary study, temporary shading affected EGCG and caffeine concentrations differently and further study is needed to elucidate the comprehensive impact of light levels including PAR and other light ranges on these key compounds. We are working on the analyses on the flavor and aroma of these samples and plan to repeat this study to have more conclusive results on how shading can be used to manipulate tea leaf quality.

This article appeared in the summer 2022 issue of Louisiana Agriculture.

Read more about tea production in Louisiana: Can Tea Production Be 'Sweet' for Southern Growers? 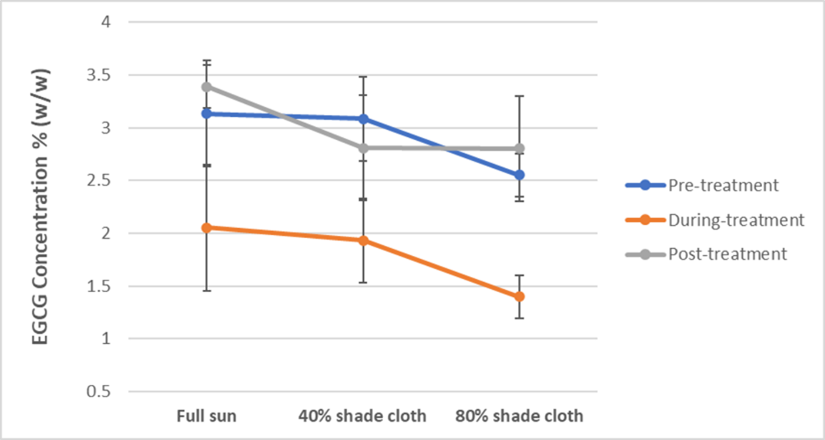 Figure 2. Concentrations of epigallocatechin-3-gallate (EGCG), an antioxidant, in green tea samples collected and processed pretreatment, during treatment and post-treatment. 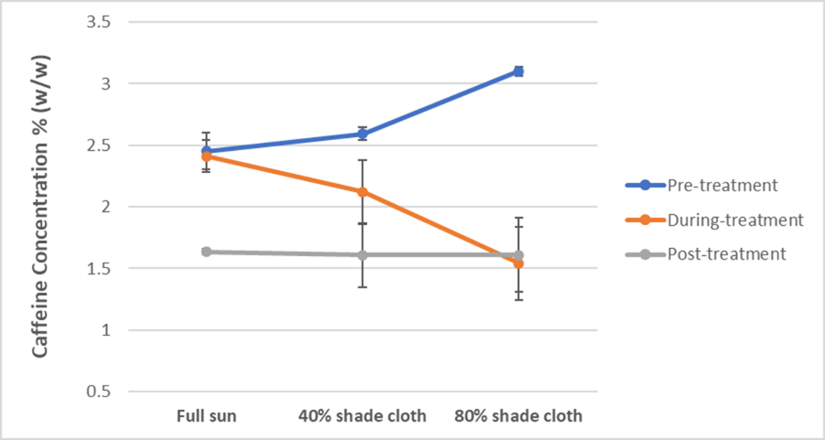