Insect Updates on Soybean and Cotton 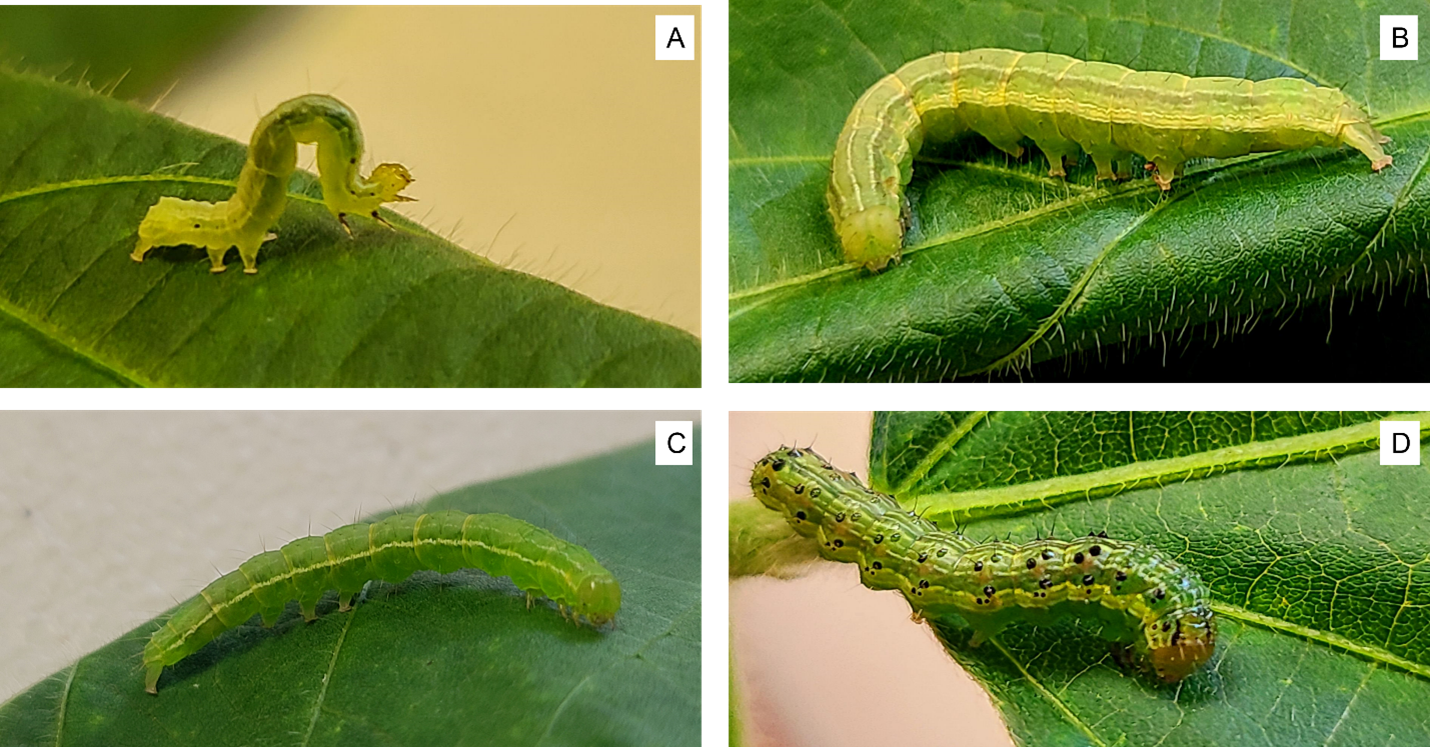 As we approach late into the summer, we should be on the lookout for late-season lepidopteran pests of soybean. Soybean loopers (Fig. 1A) can build large populations in a short amount of time and can be exaggerated by the use of broad-spectrum insecticides for stink bugs and three-cornered alfalfa hoppers. The threshold for soybean loopers is eight half-inch worms per row foot or 150 worms in 100 sweeps. Good insecticide coverage is crucial for optimal control of soybean looper. Several insecticides used against loopers include Prevathon or Vantacor, Besiege, Intrepid Edge, and Steward.

Although not a defoliator, corn earworms (Fig. 1D) can damage soybeans by feeding on fruiting structures. The threshold for corn earworms is three worms per row plot or 38 worms in 100 sweeps after bloom. Corn earworms in Louisiana have developed high levels of resistance to pyrethroids; thus, the use of pyrethroid alone for this pest is highly discouraged. Recommended products include Prevathon or Vantacor, Besiege, Intrepid Edge, and acephate plus a pyrethroid.

Adult Dectes stem borers are relatively large (quarter to half-inch long) gray longhorn beetles (Fig. 2A) and are predominantly found from late June to August. Females lay eggs in the petioles and the resulting larvae initially feed in the leaf petioles before tunneling into the stems. Larvae (Fig. 2B) will tunnel up and down the stem and eventually move down toward the crown near the soil to overwinter. Girdling in the stem can potentially lead to lodging. There is currently no threshold for this pest and there are no effective products for the larvae. Timely harvest is effective in reducing yield losses due to lodging. Although this pest is not as yield-limiting compared to other insect pests of soybean, we would like to know how widespread it is across the state. If you observe Dectes stem borer in your field, please let me know or your extension agents. 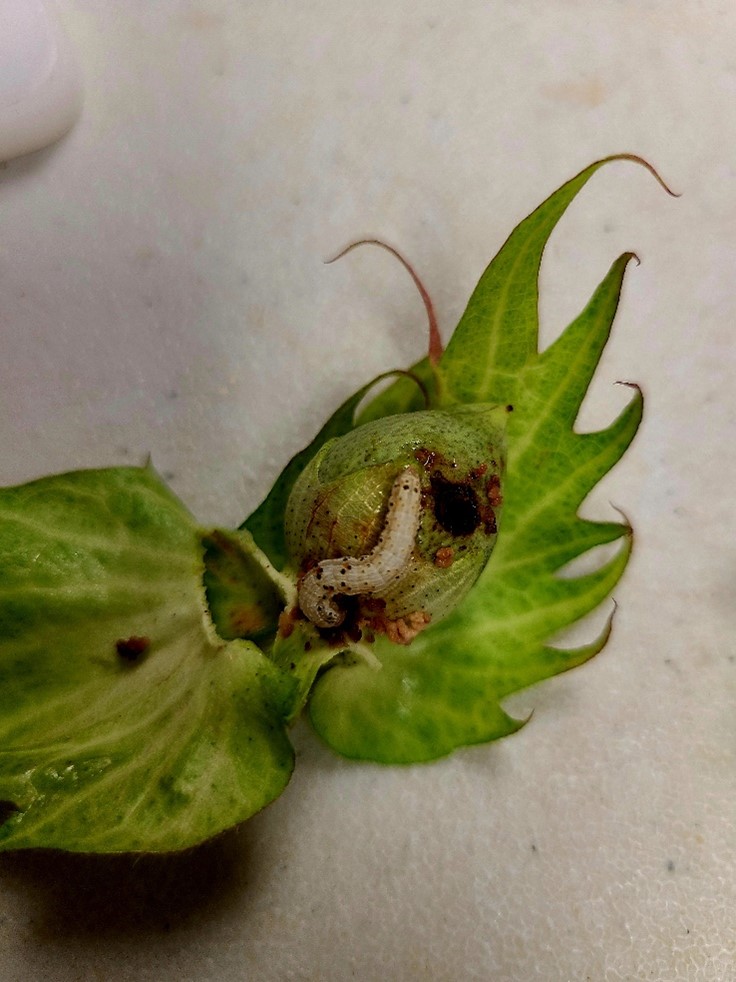 Bollworm activity has steadily increased across the Mid-South. If bollworm pressure intensifies, a rescue spray may be necessary. The threshold for Louisiana cotton is 6% fruit injury with the presence of live worms, but this threshold may not apply in every situation or for every Bt technology. If damaged-boll counts exceed 2% and significant numbers of larvae are present and continuing to cause damage, treatment may be warranted. Besiege or Prevathon/Vantacor will provide the greatest control of bollworms. However, bear in mind that bollworms are cryptic feeders and those worms that have been established in the squares or bolls may not be controlled by diamides.

Late-season potassium deficiency in cotton is a common sight throughout the state. Prior to peak bloom, potassium deficiency often appears on older leaves as interveinal chlorosis followed by red, orange, or bronze discoloration. After peak bloom, similar deficiency symptoms appear mainly on new leaves. The affected leaves continue to deteriorate, eventually showing leaf spotting and necrotic lesions oftentimes caused by secondary fungal pathogens such as Alternaria, Cercospora, and Stemphylium (Figure 1). These secondary pathogens can be key contributors to premature defoliation.

Prior to defoliation, growers should inspect the uppermost harvestable boll by cutting a cross-section. A boll is considered mature if it is difficult to cut with a knife and seed coats are tan/brown or black. Once a dark seed coat has formed, defoliation will not adversely affect yield on those bolls. For more information regarding cotton defoliation, please see the Mid-South Cotton Defoliation Guide. 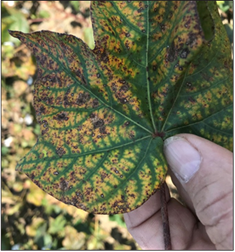 Optimum time for soil sampling after rice and corn harvest

The amount of phosphorus (P) and potassium (K) fertilizer required for maximum crop yield is determined by routine soil testing. Most land-grant universities developed soil-test-based P and K fertilizer recommendations based on soil samples collected typically from late winter months (January-February) to before summer crop planting. However, the time for soil sampling from producer fields has recently changed greatly. Nowadays, crop consultants or farm-service reps prefer to collect soil samples mostly within a few weeks after summer crop harvest (August-November, depending on the type of summer crop) due to the chances of rain in the early to late winter months (December-January), increased number of soil collection over time, and use of ATV’s or auto samplers in dry soil conditions. Since soil-test P and K concentrations are reported to fluctuate spatially and temporally, the recent change in soil sampling time may influence the current soil-test-based P and K fertilizer recommendations for row crop production.

Recent research conducted on silt loam soils in Arkansas showed that soil-test P and K concentrations changed temporally from September through March and the temporal change was affected by the previous summer crop. Researchers from University of Arkansas (Slaton et al., 2016) found that following rice harvest, soil-test P concentration remained constant across time, but soil-test K concentration increased gradually with time and peaked by 22 ppm (44 lb K/acre) in late-December to early-January (Figure 1). High residue crops such as rice and corn hold a greater amount of K than P in vegetative plant parts and eventually release more K across time after harvest compared to a low residue crop such as soybean. For example, crop residue (stover) of a 200 bushels/acre corn crop contains 32 lb P2O5 and 220 lb K2O per acre and 200 bushels/acre rice crop contains 18 lb P2O5 and 129 lb K2O per acre. Since K is not a part of the cell wall or any molecular structures, it is slowly be leached from crop residues by rainfall following harvest, resulting in increased soil-test K concentration in December-January compared to September-October and lower recommended fertilizer rates for samples collected in the late winter months. Therefore, it is better to collect soil sample in late December-January following rice and corn harvest to get higher soil-test values and save fertilizer input costs. We established research trials at the LSU AgCenter – Macon Ridge Research Station and Northeast Research station to pinpoint the optimum time to collect soil sample after corn, cotton, and soybean harvest, and the preliminary results will be available by next year.

Use of a herbicide, such as paraquat, as a desiccant in soybean has become popular to potentially improve harvest efficiency in Louisiana. The paraquat label states at least 65% of pods should be mature (Figure 1) or moisture content should be 30% or less for indeterminate soybean varieties; and at least 50% of the leaves should have dropped and remaining leaves should be yellow for determinate varieties.Table 1 gives the harvest aid application timing label requirements for the labeled products in soybean. 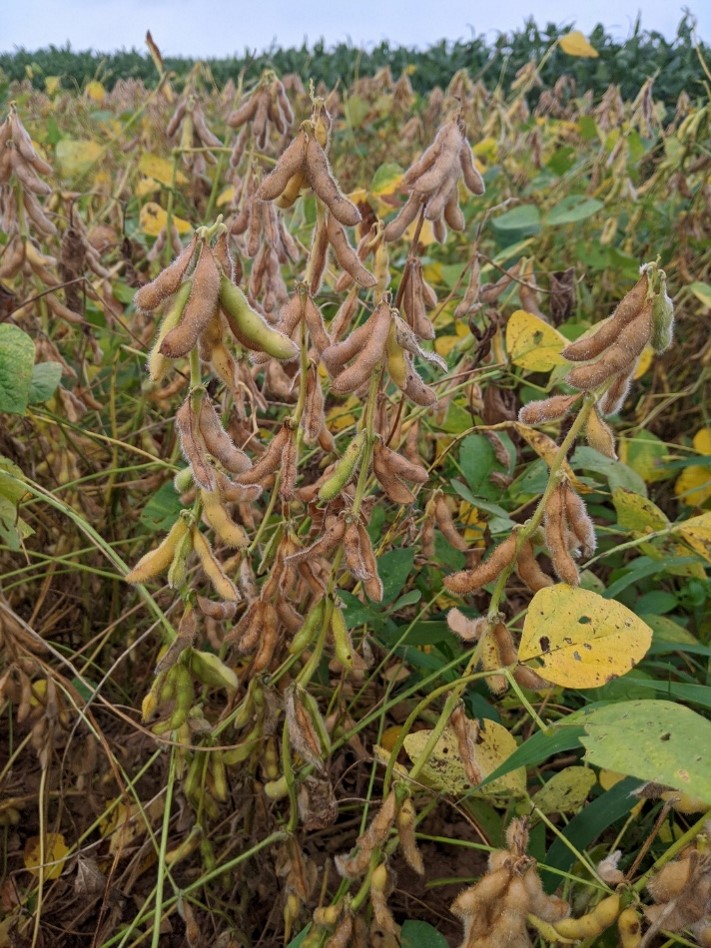 Figure 1. Soybean plants where approximately 65% of the pods have turned their mature color.

Labels are very specific as to when they can be applied to soybean as a harvest aid. What if a herbicide desiccant is applied earlier than labeled in soybean?Research was conducted in Louisiana to evaluate this question and indicated that harvest seed quality and yield were not affected by harvest aid application if the application was made after the plant reached physiological maturity (Boudreaux and Griffin 2011; Weed Technology vol. 25:38-43). Physiological maturity is when the seeds have separated from the white membrane inside the pod and seed margins are prominently defined (Figure 2), which occurs at the growth stage 6.5 (R6.5 and approximately 50% moisture). Any use of a harvest aid prior to the seed reaching physiological maturity will result in a loss in yield and applying herbicides not according to the label is illegal. These products are labeled specifically for weed desiccation, not soybean desiccation.

Figure 2. Soybean seed within pods showing, from left to right, youngest to oldest. The pod where the white membrane has detached with clear seed margins would be considered at R6.5 growth stage.

Paraquat, Aim, Sharpen, and sodium chlorate are contact herbicides, thus good coverage is essential.Also, environmental conditions following application can greatly affect efficacy.The paraquat label states that it is rainfast within 15 to 30 minutes after application. The Defol 5 label (sodium chlorate) states that applications should not be made if rainfall is anticipated within 24 hours, and defoliation will be best on sunny, hot, and humid days.

Producers must also consider the required preharvest interval (PHI) associated with each product.When using multiple products, the longest PHI must be adhered to. Although the PHI on certain harvest aids are relatively short (3 days), longer time intervals may be needed to achieve optimum desiccation of weeds and/or soybean.Labeled rates and comments are presented in Table 1 which was adapted from the 2022 Louisiana Suggested Chemical Weed Control Guide.

LSU AgCenter entomologists recommend the control of threshold populations of RBSB until the soybeans are out of the field.This means that the inclusion of an insecticide for the control of RBSB with a harvest aid application could be necessary (sodium chlorate cannot be tank-mixed with any insecticide). However, restrictions on the label may include total active ingredient restrictions and PHIs. It is important to read all label materials before the use of any labeled products. When label restrictions prevent the inclusion of an insecticide with the harvest aid application, growers should not delay the harvest of soybean so that the seed can be removed from the field as quickly as the label allows.

Table 1. Herbicides labeled for use as a desiccant in soybean.

The southern root-knot nematode (Meloidogyne incognita) can cause considerable damage on soybean if not properly managed. In a recently conducted three-year survey (2019 – 2021), the southern root-knot nematode was detected in 22% of the 164 fields surveyed, and often at soil population densities well above the established damage threshold for soybean in Louisiana. Infective juveniles of this nematode inhabit the soil of infested fields, where they enter the root system on susceptible plants and establish permanent feeding sites within the vascular cylinder of the root system. As the nematode feeds and continues to develop the roots begin to swell, forming the characteristic root galls (i.e., knots) we see on infected plants (Figure 1). Infested fields often show irregular patches of stunted crop growth, with significant root galling often observed on plants uprooted from the center of the patch of stunted growth. When diagnosing root-knot nematode in a soybean field, it is important to not confuse root galling with nodule formation by beneficial nitrogen-fixing bacteria. Root galls are formed in the interior-most portion of the root system and cannot be easily removed by gently brushing the roots with your fingers, whereas root nodules are located closer to the exterior of the roots and can be easily removed from the roots with your fingers.

The best time to diagnose root-knot nematode is right before or immediately after harvest, as this is generally when soil population densities are at their highest. An added benefit of sampling during this time is that it is much easier to move within and sample a soybean field after it has been defoliated or harvested. Just don’t wait too long after harvest, as the nematode soil population densities will begin to decline with the absence of a plant host to feed upon. Uprooting plants and inspecting root systems for galling can be the fastest and most cost-effective way to diagnose root-knot nematode on your soybean crop. Soil samples can also be analyzed for the presence of root-knot nematodes by sending them to a diagnostic lab, which will also provide additional information on the abundance of other damaging plant-parasitic nematode species, such as the reniform nematode (Rotylenchulus reniformis), which does not produce any obvious root symptoms. We encourage all growers to utilize LSU AgCenter’s Nematode Advisory Service to assist them with diagnosing their nematode problems. 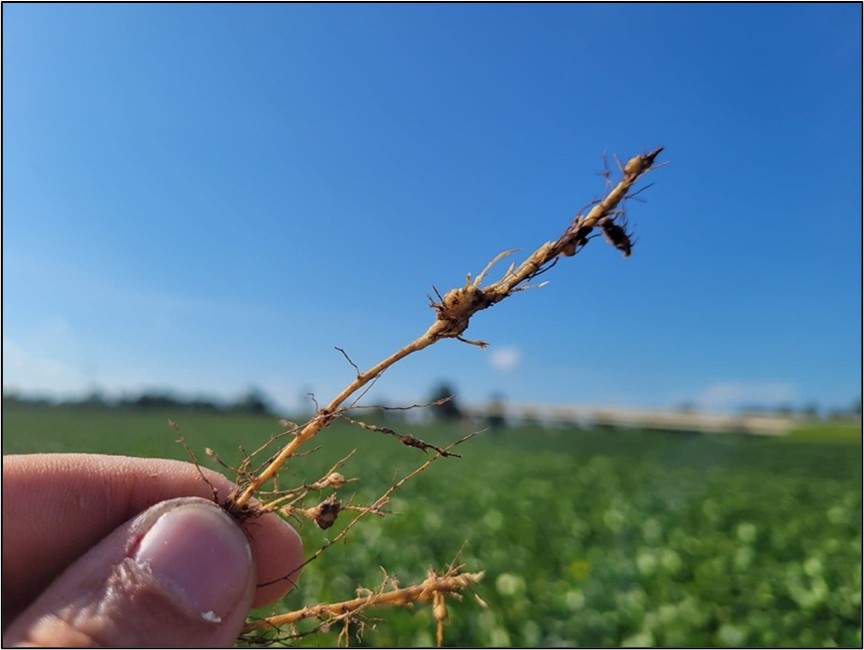 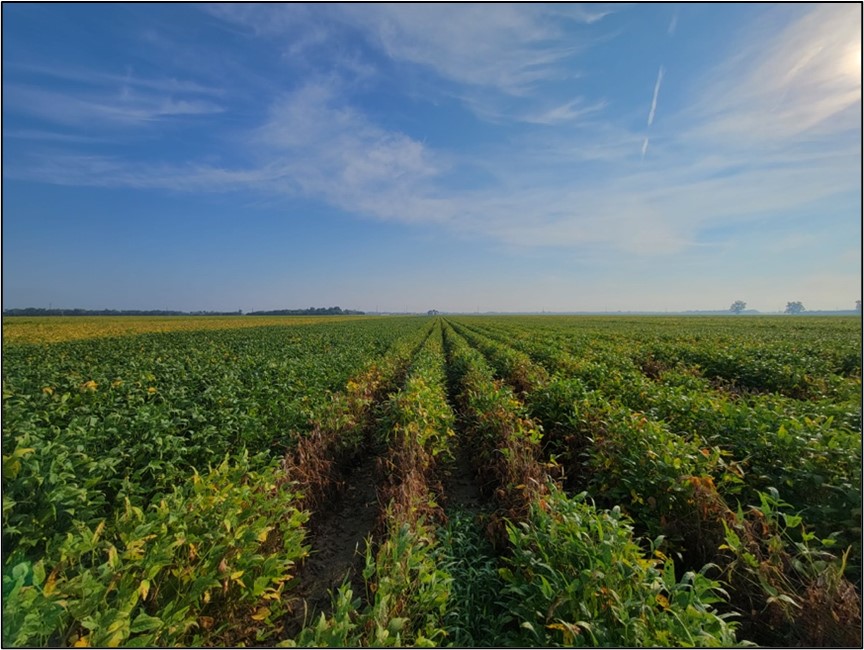 Figure 2 – Soybean variety trial in Concordia Parish (2021) showing symptoms on a susceptible variety (right side) relative to a resistant variety (left side).