(07/15/22) NEWELLTON, La. — Standing in a soybean field, Lisa Fultz pulled six plastic bottles out of an ice chest and passed them around to dozens of farmers, students and others looking on with interest despite the blazing summer heat.

Each bottle was marked with a date and filled with dirty water — some that was relatively clear, some that looked more like chocolate milk.

Fultz, an LSU AgCenter soil scientist, explained that the bottles of dirtier water contained runoff from conventionally managed fields where soil was more prone to washing away and muddying local waterways. The clearer samples were taken from fields where conservation practices such as planting a cover crop were implemented.

“They help make the soil more stable,” she said. “And the more stable the soil is, the less of it and its nutrients that we lose.”

The samples, collected over the course of three years, have been safeguarded at cool temperatures. For Fultz, they’re a useful visual demonstration of promising research findings that she and other AgCenter scientists have uncovered as part of an initiative funded by a $1.4 million grant from the Patrick F. Taylor Foundation.

The scientists showcased their work July 12 at a field day at Somerset Plantation in Newellton — one of two model farms for the grant project, which aims to help farmers improve soil health and reduce nutrient runoff. Somerset Plantation, farmed by the Hardwick family, serves as a site for research on management practices for row crops such as corn, soybeans and cotton. Keith Dugas’ sugarcane farm in Paincourtville is the other model farm.

Fultz’s runoff study was just one of several projects highlighted at the event. Fellow AgCenter soil scientist Brenda Tubaña told about her research on ways farmers can decrease the amount of fertilizer they apply while still reaching optimum yields. Others discussed sensors that measure soil moisture, methods for monitoring water quality and water movement, and using variable seeding and nitrogen rates.

Phyllis Taylor, chairperson and president of the Taylor Foundation, and other members of the organization were at the field day to see the work firsthand.

“We’ve been blown away by what they’ve accomplished,” she said. “It’s something that will take years because Mother Nature varies from year to year. To get the overall consensus about how to operate takes time — so we are committed to this project.”

The initiative has taken on new significance since its 2019 launch, said Luke Laborde, interim LSU vice president for agriculture. Prices of farm inputs have skyrocketed in that timeframe, so it has become even more important to carefully manage those resources.

“When we started this model farm project three years ago, who would have imagined all the changes and the challenges that we would be facing with diesel, fertilizers, ag chemicals?” Laborde said. “Having these model farms and being able to do this on a large scale is critically important, not just to the AgCenter but to our producers and agribusiness partners across the state.”

“This is some of the most important work we’re doing in the AgCenter,” added Michael Salassi, AgCenter associate vice president.

Helping Louisiana’s diverse agriculture sector address environmental challenges and remain economically viable are both priorities for the AgCenter, he said.

“Production practices for one crop in one area of the state are going to be different from others,” Salassi said.

Studying these topics at partner farms and AgCenter research stations around Louisiana provides a valuable opportunity to find solutions that are both realistic and effective.

Melissa Cater, director of the AgCenter Northeast Region, said she has been pleased to see many students get involved in the management practice research at the Hardwick farm.

“They’re bringing the theory that they’re learning in the classroom to the field and applying themselves here on a real farm,” she said. 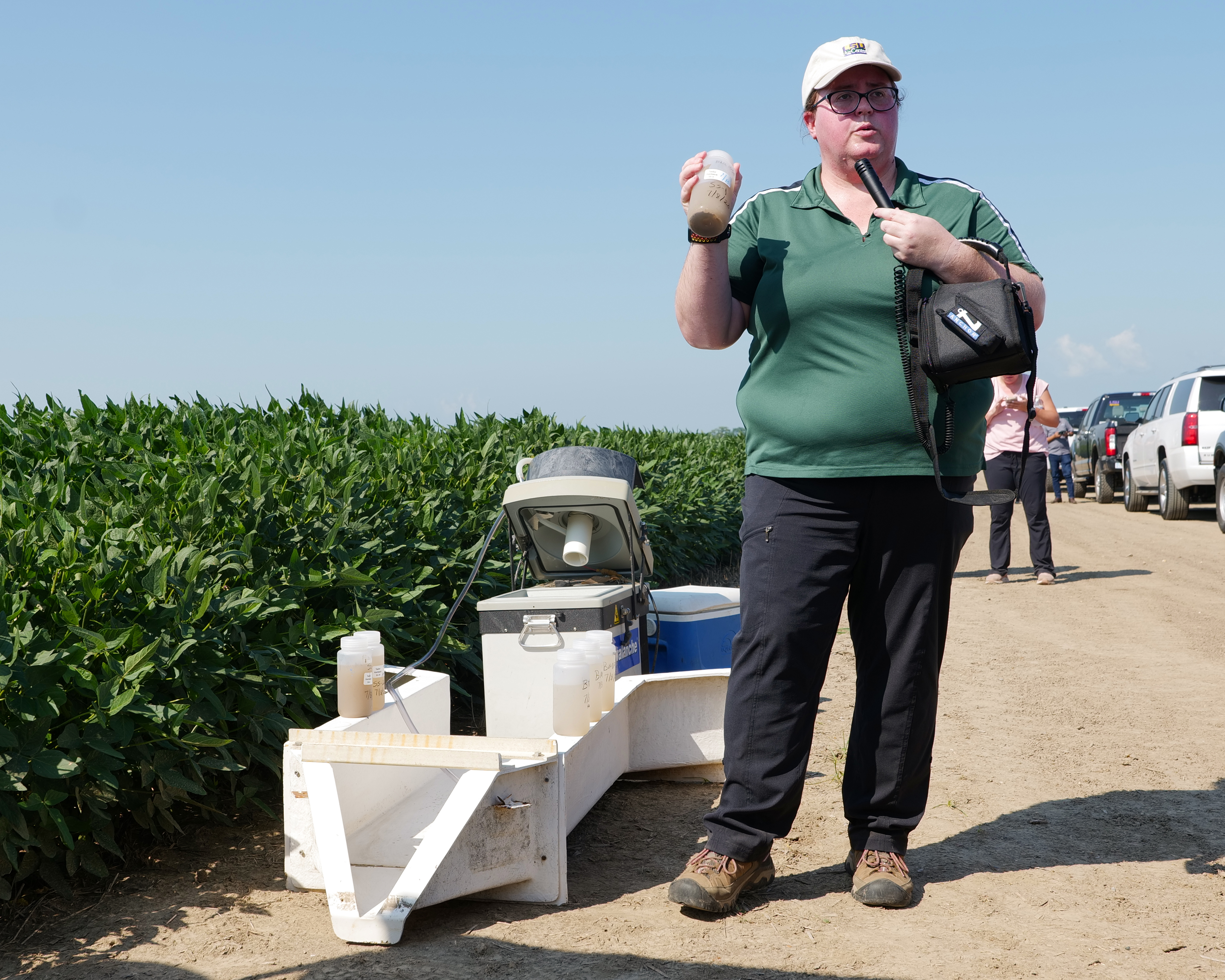 LSU AgCenter soil scientist Lisa Fultz displays a bottle containing a sample of runoff from a field during a field day July 12 in Newellton. Photo by Olivia McClure/LSU AgCenter 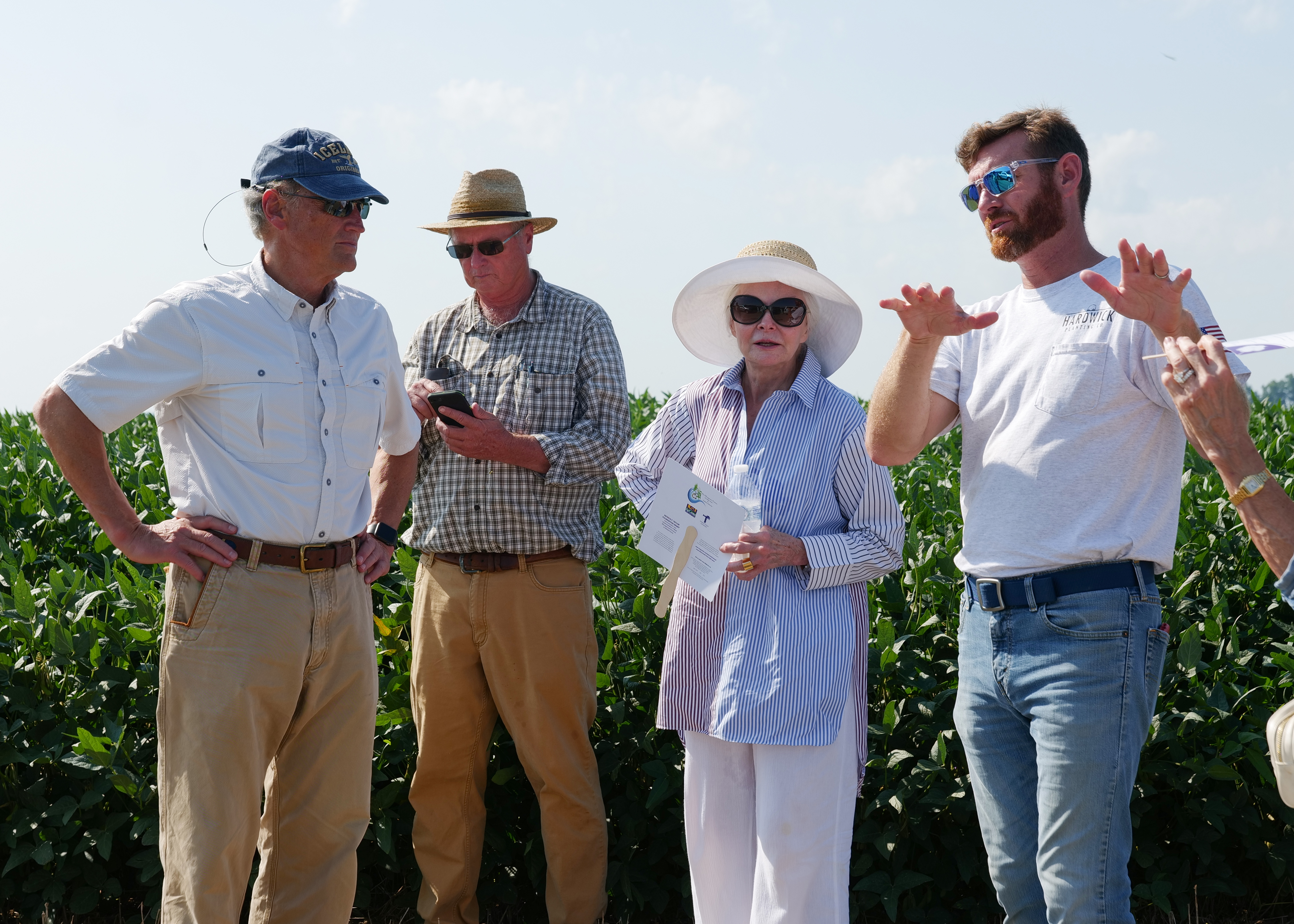 Mead Hardwick, right, of Somerset Plantation and the Hardwick Planting Company, speaks with Phyllis Taylor, second from right, chairperson and president of the Patrick F. Taylor Foundation during a field day July 12. The Taylor Foundation is funding an LSU AgCenter research initiative to help farmers become more sustainable. The Hardwick farm is one of two model farms participating in the project. Photo by Olivia McClure/LSU AgCenter 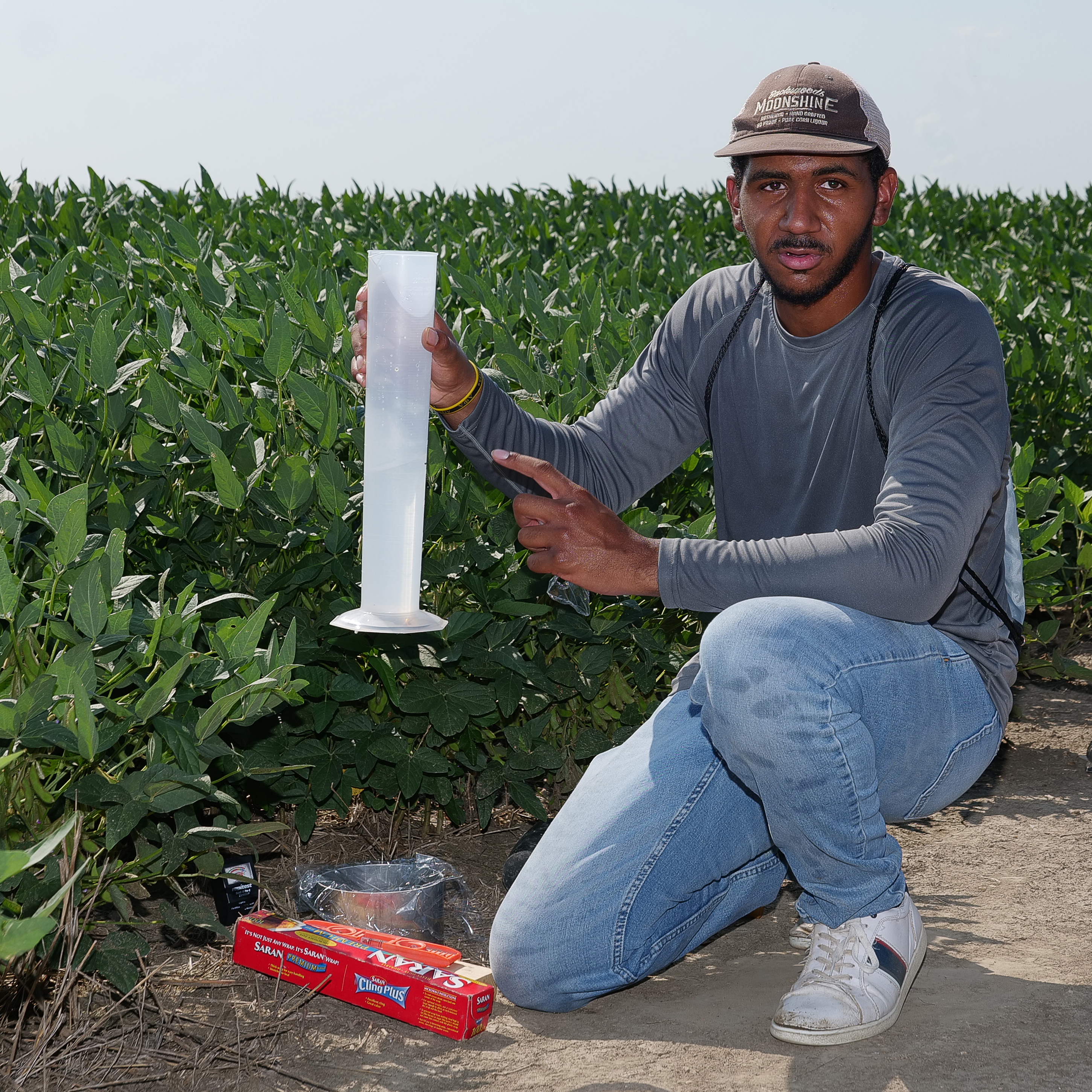