75 Years of Preserving Genetics: From the Dairy Improvement Center to the Aquatic Germplasm and Genetic Resources Center

Center safeguards the valuable genetics of agricultural and research animals

The year was 1947. America had returned victorious from World War II, and it was a time of national growth and investment. That year a 4,200 square-foot, state-of-the-art building was built adjacent to LSU surrounded by agricultural lands next to the Mississippi River levee. The building housed the LSU Dairy Improvement Center. In the following decades new additions to the center more than tripled its size, and additional facilities were built to improve the genetics and milk yield of dairy cattle.

In the mid-1990s Terrence Tiersch began work with dairy scientist John Chandler at the center to pioneer the freezing of fish sperm using established industrial approaches developed for semen of dairy bulls. This work in cryopreservation provided the foundation for shifting to establishment of programs and facilities called germplasm repositories or biobanks. Germplasm is the genetic material of a species, such as sperm, eggs, embryos or tissues, that can be preserved. Surprisingly, dairy provided a great model for fish and shellfish because it is a large, mature global industry based on protecting, shipping and selling valuable genetics in the form of frozen semen. Those are all activities that will be very important for eventual application of similar technology to aquatic species.

This focus on applying the results of research in the real world is intended to help multiple aquatic groups. For example, fish farmers (aquaculture), just like ranchers or crop farmers, need genetic improvement to ensure they can produce a high-quality product. Maintaining valuable breeder fish in ponds is expensive and risky. Freezing the sperm offers a way to preserve valuable genetics and easily use them in selective breeding programs. This kind of approach could help ensure the future of Louisiana oysters and support the farmers who grow them in response to problems such as low salinity or disease. Based on these needs the Aquatic Germplasm and Genetic Resources Center (AGGRC) was created in 2015 at the Dairy Improvement Center.

The facility became available at that time because, over the decades, the focus of dairy breeding shifted from university research farms to the private sector, and Dairy Science faculty retired or moved their work onto the LSU campus. Because of previous work there, Tiersch’s group moved from the LSU AgCenter Aquaculture Research Station (5 miles from campus) to continue germplasm protection by converting the facility from work with bulls to work with fish, shellfish and other aquatic species. The mission of the AGGRC is devoted to assisting the development of germplasm repositories for aquatic species through interdisciplinary approaches and has four main programs: research, technology development, commercial-scale processing and outreach.

Personnel at the AGGRC have performed research addressing repository development for hundreds of aquatic species for 30 years. This work has always included farm-raised species such as catfish and oysters. The work also includes animals that are used for research of human disease. Animals such as monkeys, dogs, rabbits, rats and mice share genetic traits with people and have been used to study human disease for the past century. Working with these animals is very expensive and often requires whole buildings with large staffs. In addition, social changes have made working with mammals such as these less acceptable. In response to these problems, aquatic species like fish, salamanders, frogs and sea slugs have been used over the past few decades in genetic studies. The National Institutes of Health (NIH) and other agencies invest billions of dollars into research using these animals, which are called “biomedical models.” Because of their relative late entry into this area, most aquatic species do not have germplasm repositories or similar facilities to protect from losses of valuable genetics due to accidents or disease, and the resources are mostly maintained as live animals.

The most important biomedical aquatic species is the zebrafish. This fish has more than 60,000 different types (called “lines”) that have been developed by researchers around the world. That is beyond the capabilities of even large facilities, such as the Zebrafish International Resource Center (ZIRC, at University of Oregon), to maintain. Personnel at the AGGRC have assisted ZIRC in developing a repository with funding from NIH. Based on this success, the AGGRC has begun to expand efforts to the other research models that have NIH-funded national centers: salamanders (Ambystoma, at University of Kentucky), frogs (Xenopus, at Woods Hole Oceanographic Institute), swordtails and platyfish (Xiphophorus, at Texas State University, San Marcos) and sea slugs (Aplysia, at University of Miami). Although it may seem strange, aquatic animals such as these will play an ever-increasing role in disease research in the future, and they are already leading to breakthroughs in a variety of fields (Figure 1).

Based on more than 15 years of interdisciplinary work, a unique technology program has been developed at the AGGRC. The goal is to provide innovative solutions to tackle real challenges encountered in germplasm repository development that otherwise would be difficult to be solved by traditional biological research. An example is open scientific hardware fabricated by more than 35 3D printers located throughout the facility. Additional examples include (Figure 2) devices operated with microcontrollers and mechanical components, sensing and monitoring platforms, and microfluidic systems. Collaboration among multiple disciplines is the core of this program, integrating the long-standing background of cryobiology and aquatic reproduction with expertise in fields within and outside the LSU AgCenter. This work also benefits greatly from close collaboration with the USDA National Animal Germplasm Program in Ft. Collins, Colorado. This is the leading animal germplasm repository in the world and includes aquatic species important to agriculture.

The AGGRC is a long-time leader in developing approaches to freeze, store and use samples for real-life applications where things like costs, time and sample quality become important factors. The AGGRC has automated equipment to rapidly fill, seal and label sample containers and large computer-controlled freezers. The center also has built a mobile cryopreservation laboratory using a custom-designed trailer for high-throughput freezing at other locations. This greatly improves accessibility to user groups and allows work with fish and samples that are freshly collected without the need for overnight shipping, which can reduce quality. Collaboration with industrial engineers at LSU has resulted in new uses of tools such as process mapping and computer simulation to help plan for scaling up cryopreservation for use in commercial settings. This work is aimed at establishing new business opportunities, such as new markets for genetic resources, and to support existing industries such as fish farming.

The AGGRC is always involved in traditional outreach activities, such as teaching and training, including tours, hosting visitors and traveling to work with cooperators. Dozens of undergraduates from across a wide range of departments at LSU have worked or researched at the center. The AGGRC also has active collaborations around the world. For example, a current project with Bangladesh Agricultural University is intended to help protect native fishes and provide food security to local people by development of repositories. In addition to regional, national and international cooperation, the center has developed capabilities such as digital photography and media studios to allow production of professional-quality manuals and videos needed for training and use of open hardware technology.

In summary, the AGGRC is proud to carry forward a 75-year legacy of addressing real-world problems as we move into the future. It has benefitted greatly by absorbing ideas from established industries like dairy and using those lessons to develop important new capabilities for fish and other aquatic organisms. It is extremely important as a nation and world that we develop the ability to protect the genetic resources of aquatic species. This is necessary to support aquaculture, which provides nutrition and economic development around the planet. It is also necessary to protect imperiled species from extinction, maintain strong populations of wild fisheries such as Louisiana fish and oysters, and enable biomedical research to improve human health. The AGGRC has emerged as a unique interdisciplinary facility with four interlocking programs designed to bring new approaches to large, global problems. This will create fresh opportunities and support the growth of lucrative markets and industries for protecting and distributing the genetic resources of aquatic species.

Terrence Tiersch is a professor in the LSU School of Renewable Natural Resources and director of the LSU AgCenter Aquatic Germplasm and Genetic Resources Center. Jack Koch is a postdoctoral researcher at the center and Yue Liu is a postdoctoral researcher in the LSU AgCenter Department of Biological and Agricultural Engineering.

(This article appears in the spring 2022 issue of Louisiana Agriculture magazine.)

The LSU AgCenter Aquatic Germplasm and Genetic Resources Center is where the LSU Dairy Improvement Center once stood. Today the facility is used to preserve the genetic material of aquatic species. Provided photo 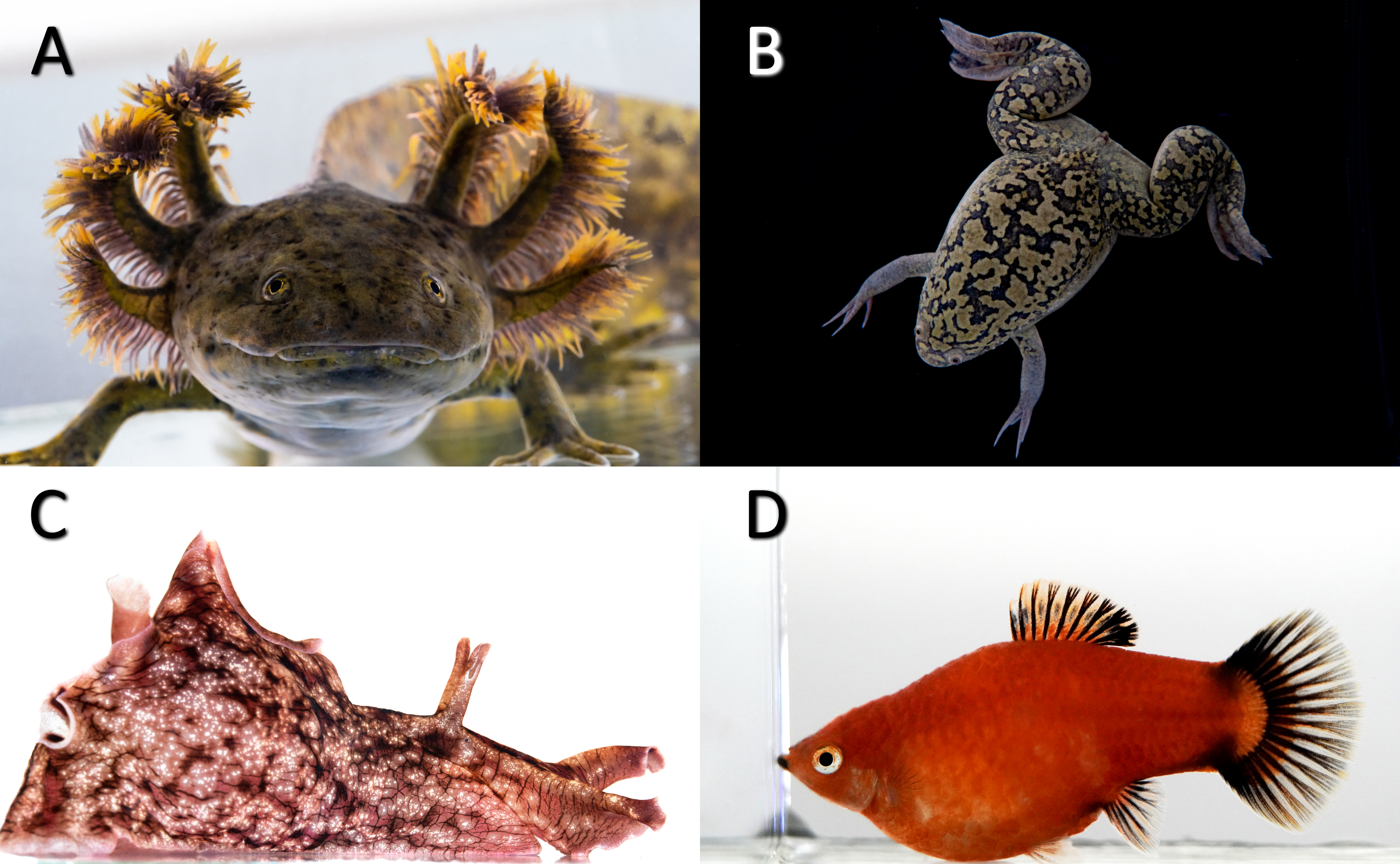 Figure 1: The AGGRC works to protect large investments in biomedical research by developing germplasm repositories for aquatic organisms such as axolotl salamanders (A), African clawed frogs (B), sea hares(C) and platyfish(D). These animals are used worldwide for study in areas such as cancer, nerve function, tissue regeneration and numerous diseases. Aquatic animals have begun to replace traditional research animals such as mice, rats and monkeys.

Figure 2. Innovative technologies are developed at the AGGRC in the form of open hardware that can be shared as computer files with user communities to support use of germplasm repositories. These devices address steps in sample processing, freezing and thawing, and are custom designed for fabrication by use of consumer-level 3D printers, electronics and microcontrollers.

The AGGRC has developed in-house digital media studios to expand outreach capabilities. Novel technologies such as 3D-printed devices require assembly and training manuals to get people started (left). Digital media capabilities also allow specialized setups to record animal behavior such as courtship of axolotls overnight in a temperature-controlled room (right). This allows the AGGRC to carry projects from biological research to engineering design through distribution.