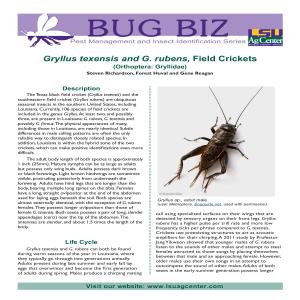 The Texas black field cricket (Gryllus texensis) and the southeastern field cricket (Gryllus rubens) are ubiquitous seasonal insects in the southern United States, including Louisiana. Currently, 106 species of field crickets are included in the genus Gryllus. At least two, and possibly three, are present in Louisiana: G. rubens, G. texensis and possibly G. firmus. The physical appearances of many, including those in Louisiana, are nearly identical. Subtle differences in male calling patterns are often the only reliable way to distinguish closely related species. In addition, Louisiana is within the hybrid zone of the two crickets, which can make positive identifications even more difficult.

The adult body length of both species is approximately 1 inch (25mm). Mature nymphs can be as large as adults but possess only wing buds. Adults possess dark brown or black forewings. Light brown hindwings are sometimes visible, protruding posteriorly from underneath the forewing. Adults have hind legs that are longer than the body, bearing multiple long spines on the tibia. Females have a long, straight ovipositor at the end of the abdomen used for laying eggs beneath the soil. Both species are almost externally identical, with the exception of G. rubens females. They possess longer ovipositors than those of female G. texensis. Both sexes possess a pair of long, slender appendages (cerci) near the tip of the abdomen. The antennae are slender, and about 1.5 times the length of the body.

Gryllus texensis and G. rubens can both be found during warm seasons of the year in Louisiana, where they typically go through two generations annually. Adults present during late summer and early fall lay eggs that overwinter and become the first generation of adults during spring. Males produce a chirping mating call using specialized surfaces on their wings that are detected by sensory organs on their front legs. Gryllus rubens has a higher pulse per trill rate and more low frequency ticks per phrase compared to G. texensis. Crickets use preexisting structures to act as acoustic amplifiers for their chirping. A 2011 study by Professor Jang Yikweon showed that younger males of G. rubens listen to the sounds of other males and attempt to steal females attracted to those songs by placing themselves between that male and an approaching female. However, older males use their own songs in an attempt to outcompete the sound of other males. Adults of both sexes in the early summer generation possess longer wings that allow for wider dispersal. Adults in early fall are shorter winged. But these females have higher reproductive potential than those found in the spring, presumably because fewer resources are allocated to growing and maintaining longer wings. One adult female can lay hundreds of eggs during her lifetime. Eggs from spring adults incubate for around 20 days beneath the soil with the duration dependent on temperature and are sensitive to soil moisture levels. When nymphs emerge from the soil, they are about the size of a pin head, roughly 1/12 of an inch (2 mm) in length. First generation nymphs molt eight to 10 times and quickly grow into adults during late spring or early summer. Time from nymph to adult takes two to three months and is dependent on environmental conditions and food consumption. Both species are omnivores, scavengers, and cannibals, feeding on a wide range of organic matter including plants, fruits, and protein from dead arthropods.

The frequent problem with both G. texensis and G. rubens species is seasonal swarming during outbreak years. Favorable environmental conditions the previous year can lead to massive numbers of overwintering eggs and result in a huge late summer generation of field crickets. Massive numbers of emerging crickets result in swarms lingering mainly around lights at night in the fall. Although they are not considered urban pests, they can be an eyesore and an aesthetic issue for homeowners with halogen or mercury vapor lights around homes and outbuildings. During some years they may cover the perimeter and walls of convenience stores and truck stops in massive numbers due to the use of bright parking lot lights. Even in years with low numbers, some crickets enter buildings and homes around brightly lit entrances. Field crickets will not infest or breed inside homes due to their dependence on humidity and food resources, as well as a lack of moist soil necessary for egg laying. Field crickets can be occasional pests in home gardens, fruit and field crops, but in Louisiana they are mainly episodic nuisance pests.

Field crickets are an important food source for many insectivorous wildlife, including birds, lizards, predatory insects, spiders and various other arthropods. They are also parasitized by a number of insect parasitoids, most notably species of flies and wasps in several families. The large biomass available during outbreak years is an episodic boom to these organisms and often results in unusually large populations of organisms that are higher in the food chain during subsequent seasons.

Although appropriate insecticides could be used for a perimeter treatment around homes or businesses, they do little to prevent more crickets from appearing in swarms in the coming days. The most effective treatment strategy is to keep perimeter lights off to prevent attracting large numbers of crickets and other insects. Where lights must be kept on, replace any halogen and mercury vapor lights or other lights that attract insects with an alternative that produces a different wavelength of light. Avoid ultraviolet and blue light as these are the most visible colors to insects. One light bulb recommendation is a yellow-colored compact fluorescent light (CFL) that is less likely to attract large numbers of insects. 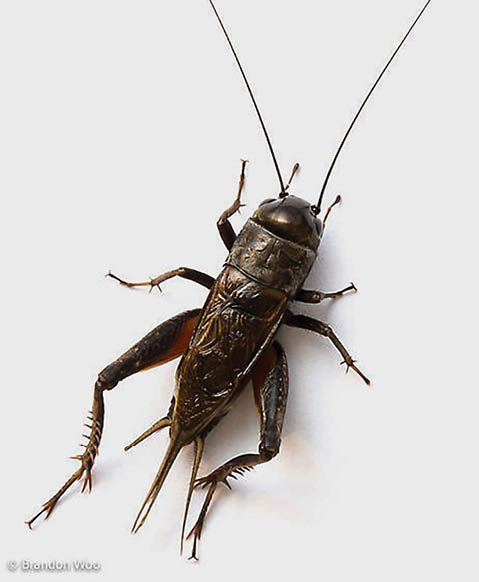 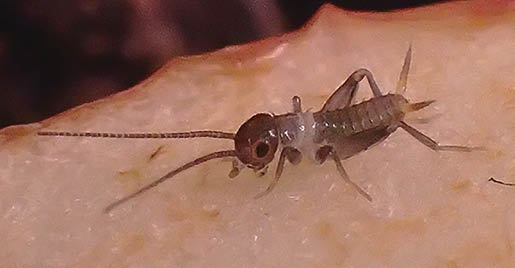 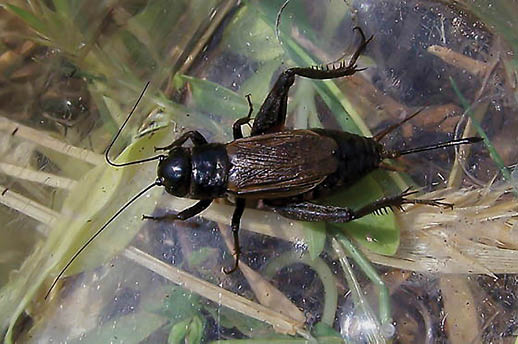 Adamo, S. A., and M. E. Lovett. 2011. Some like it hot: the effects of climate change on reproduction, immune function and disease resistance in the cricket Gryllus texensis. Journal of Experimental Biology 214: 1997–2004.