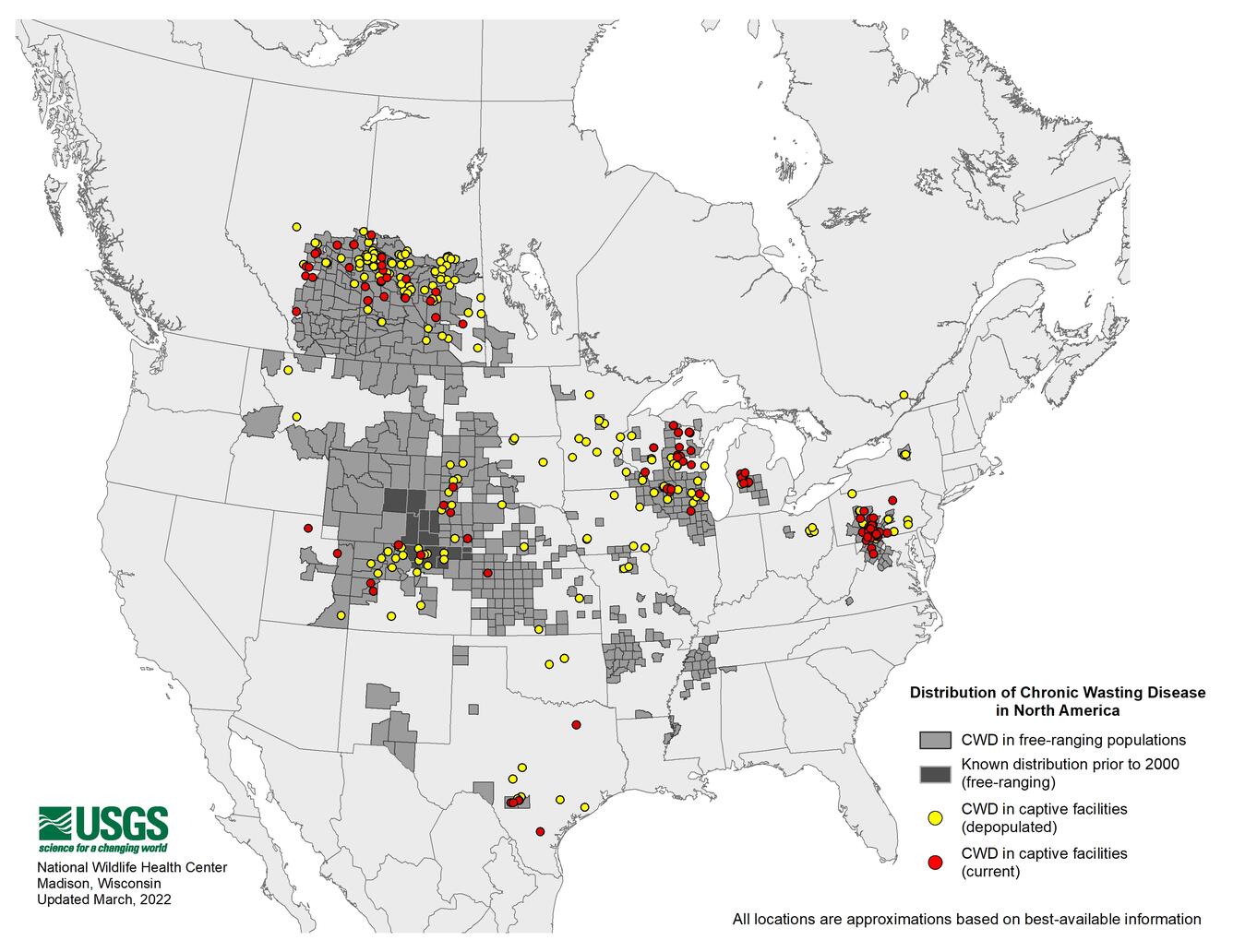 Chronic wasting disease (CWD) negatively affects the nervous systems of white-tailed deer, mule deer, red deer, elk, moose and other cervids. It is one in a group of diseases called transmissible spongiform encephalopathies, which includes bovine spongiform encephalopathy in cattle (otherwise known as “mad cow disease”) and scrapie in domestic sheep and goats. The disease is caused by misfolded proteins (prions) that are replicated by host animals. The prions interrupt and degrade nerve cells and ultimately eliminate basic nervous system functions, always resulting in death of the infected host. To date, there are no vaccines to prevent infection, and once an animal is infected, there are no effective treatments.

Symptoms of CWD include emaciation or generally poor body condition; decreased activity or erratic behavior; wide, low stances and blank expressions; excessive drinking and urination; and salivation and grinding of teeth. These symptoms appear 16 to 36 months after infection but are common to many wildlife diseases. Thus, diagnosis of CWD requires laboratory testing. CWD is spread among infected animals by direct and indirect contact with saliva, urine, feces or a carcass. These prion-carrying sources are deposited on the ground and in the soil and can be picked up by other animals during foraging. Reservoirs of prions in the environment (e.g., plants) may also enable transmission. Although mother-offspring transmission is possible, lateral transmission between two animals is the typical route for infection.

CWD has been reported in all adjacent states and was detected in Union County, Arkansas, just 7.5 miles north of the Louisiana-Arkansas border, in late 2021 (Figure 1). In response, the Louisiana Department of Wildlife and Fisheries (LDWF) implemented an emergency feeding and baiting ban in Morehouse and Union parishes effective Dec. 6, 2021. LDWF found no evidence of CWA after testing more than 300 samples from Morehouse and Union parishes and lifted the baiting ban in early January. However, in early February 2022, LDWF reported its first case of CWD in northeast Tensas Parish. In response, officials implemented a supplemental feeding and baiting ban as well as deer carcass export restrictions in Tensas, Franklin and Madison parishes that remains in place as of early March 2022. The public can find more information about this Declaration of Emergency order by the Louisiana Wildlife and Fisheries Commission on LDWF’s website.

Continued surveillance is key and could help wildlife biologists identify changes in patterns of disease occurrence over time. If you see an animal you think might have CWD, do not attempt to touch, kill or move the animal in any way. Instead, carefully document the animal’s location and any other pertinent details, then immediately contact the nearest game warden or wildlife biologist who will obtain samples from the animal. You can find more information on websites and social media hosted by LDWF, the CWD Alliance (https://cwd-info.org/), the National Cooperative Extension Working Group for CWD Education, the LSU Forestry and Wildlife Extension Facebook Page, and in LSU AgCenter Fact Sheet No. 3623.