Mild weather gets Louisiana crawfish season off to early start

(01/19/21) ABBEVILLE, La. — Above-average temperatures in November and December have helped Louisiana’s crawfish season get off to a fast start.

Water temperatures in some ponds were as high as 75 degrees at the end of December, which kept newly hatched crawfish active and growing. These weather conditions led to many crawfish reaching market size in late December and early January.

“When the water temperature is jumping between 60 and 70 degrees, that’s optimum for crawfish growth,” said Mark Shirley, an aquaculture agent for the LSU AgCenter and Louisiana Sea Grant.

Unfortunately for crawfish lovers, freezing conditions are expected across much of the crawfish-producing parishes late this week, which will put a damper on the catch until warmer weather returns.

Shirley said some crawfish producers and buyers have told him this year is one of their better starts in the past five years.

Shirley expects this year to be a good season because of the rainy weather through early September while many crawfish were in their late-summer burrows with their young. Wet conditions help both adult and young crawfish survive until their ponds are flooded in September and October.

One of the biggest threats to the crawfish industry is the deadly white spot virus. Because little is known about the virus, AgCenter and Sea Grant researchers have started a research project to learn more about it.

“We don’t know the transmission vectors at this point — whether it’s birds, whether I’s insects or something in the water,” Shirley said. “We haven’t identified how it gets into a pond.”

Haley Gambill is an LSU graduate student involved in collecting field data for the project.

Gambill said most of the information on white spot is related to shrimp.

Shirley is quick to point out that white spot is only a threat to crustaceans.

“The virus might be present or not present in a sack of crawfish you may boil this weekend,” Shirley said. “It’s not a concern for people. So go ahead and enjoy the crawfish. It doesn’t affect the taste. It doesn’t affect anything else.”

Shirley said one of the telltale signs a pond has been affected is that larger crawfish will die and be found floating on the water. Another sign is the catch will go down significantly in a matter of two or three days.

Louisiana is expected to have nearly 260,000 acres of crawfish ponds across the state producing nearly 150 million pounds of crawfish. 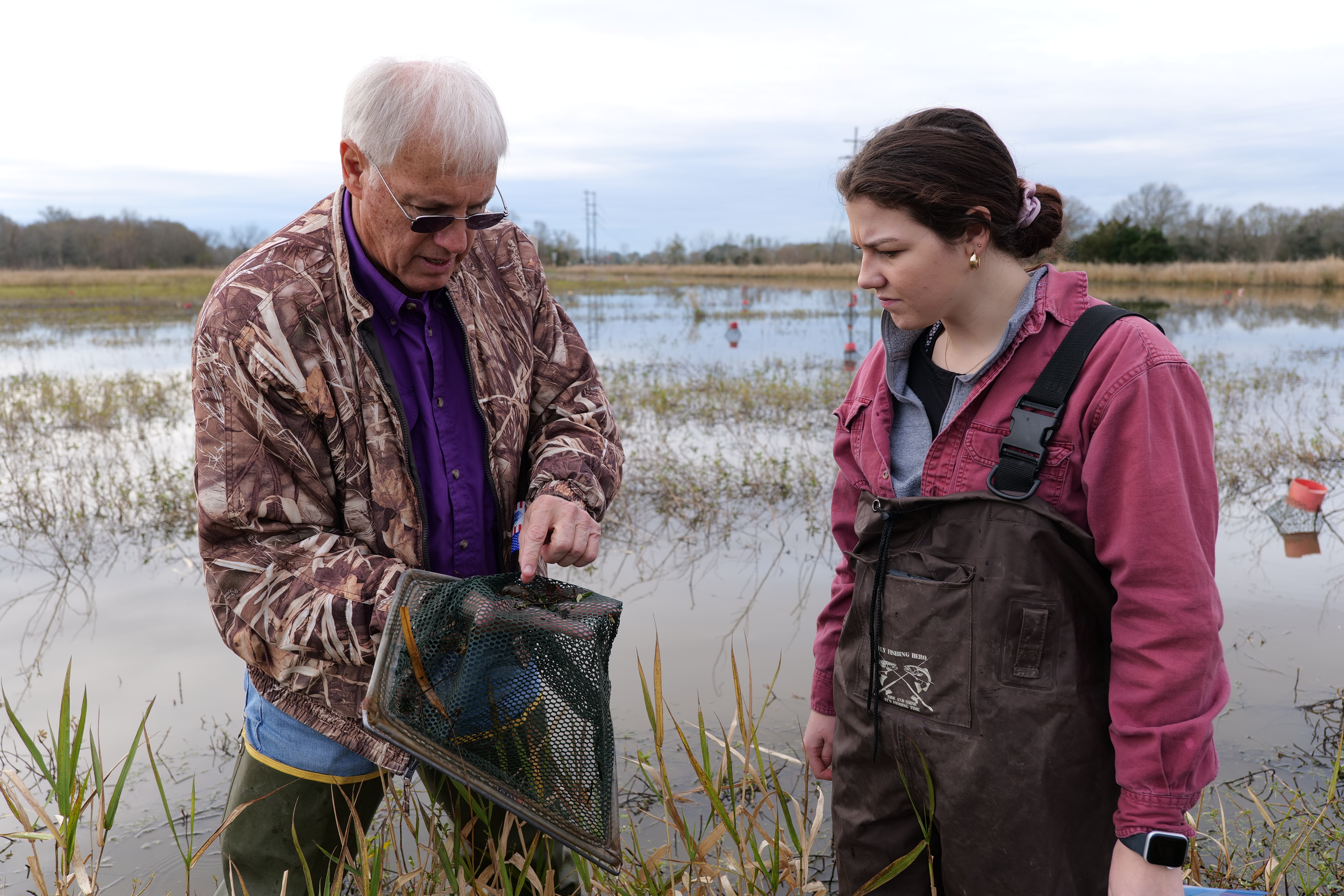 Mark Shirley, an LSU AgCenter and Louisiana Sea Grant aquaculture agent, and Haley Gambill, an LSU graduate student, examine some young crawfish as part of a white spot virus research project. The virus can lead to a very high mortality rate, bringing the commercial harvest of the pond to an end. Photo by Craig Gautreaux/LSU AgCenter