Adults females are medium to large 0.3-0.5 inches (8-12 mm in body length), tan to dark brown spiders, with globular abdomens that are dull or slightly shiny in surface luster and covered with fine velvet hairs. The abdominal color is highly variable, and some unusually pale spiders may appear pale tan or nearly white in color. The forepart of the body (cephalothorax) is often darker in color than the abdomen and may appear almost black. The abdomens of females possess an orange or yellowish orange marking underneath (ventral aspect). The orange marking may be distinctly hourglass shaped or may be irregular. The upper part of the abdomen (dorsal aspect) typically possesses wavy dark or pale gray, yellow, or orange markings on the brown background, sometimes including a row of pale bordered ovals along the midline. Males are tiny brown spiders, 0.1 to 0.2 of an inch (2 to 5 mm) in body length, variable in color and markings but typically lacking the bold patterns present on females.

Females and immatures build tangled cobwebs attached at various points to structures for anchorage. The common name of the family, “cobweb spiders,” is in reference to the disorganized nature of the web. Egg sacs of brown widow spiders are distinct and diagnostic for the presence of brown widows, even in the absence of the spiders themselves. They are round, formed from silk and typically are around 10 mm in diameter. The surface has a regular arrangement of blunt silken spikes or tubercles, often described as similar to the shape of a World War II vintage anti-ship mine.

Females and immatures hide in one corner of the web, but often are not concealed, unlike most other widow spiders. When a prey item is detected, the spider produces enough silk to prevent escape, then bites it and feeds on it at leisure. Males are attracted to webs of mature females and are seldom seen away from their much larger mates. Following mating, females often kill the male. She then produces the distinctive spiked egg sacs containing several dozen eggs each. Spiderlings hatch within two or more weeks, depending on temperature, and leave the egg sac several weeks after that. They then disperse or are eaten by their siblings. In Louisiana development may be continuous year-round indoors or outdoors during periods of mild weather.

Brown widow spiders are not native to the U.S. and are thought to have originated in South Africa. They first appeared in Louisiana during the early 2000s and by 2005 had become the most common widow spider in some urban areas. Brown widows thrive in a wider variety of situations than black widows and may build large populations on and around homes and outbuildings. Brown widows are less of a medical threat to humans than black widows. Bites are extremely rare and are almost always the result of accidentally trapping the adult females against the skin. When disturbed, brown widows retreat to the interior of the web or drop to the ground to escape the threat. Even in rare cases of bites, the amount of venom injected is less than with other species and usually results in milder symptoms. Symptoms of brown widow bites are typically confined to the area of the bite, but more serious systemic symptoms have been documented. Anyone suspecting they may have been bitten by a brown widow should seek the advice of a physician. Males and immatures are no threat to humans due to their smaller sizes.

Isolated brown widows on property are not generally cause for concern. However, large numbers around homes or in places where they are likely to come into contact with humans may require manual removal or chemical treatment. Individual spiders or small numbers of them can be controlled by over-the-counter insecticide formulations. Be sure the chemical is labeled for spiders and follow label directions. Extensive populations around dwellings should be managed by a pest control professional. 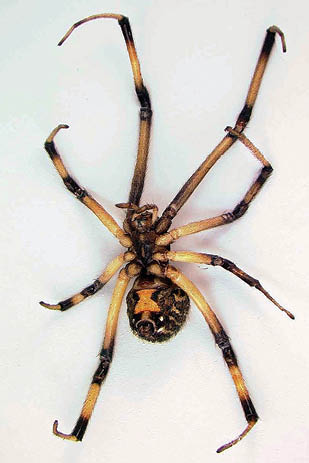 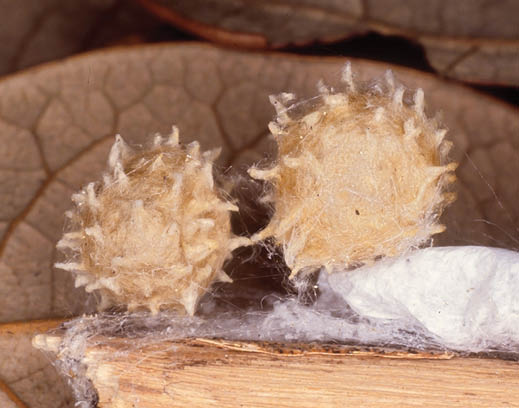