(09/23/21) BATON ROUGE, La. — The Louisiana agriculture industry has suffered at least $584 million in damage after Hurricane Ida walloped the southeastern portion of the state last month with strong winds and flooding, according to a new report from LSU AgCenter experts.

Timber damage makes up about half that amount, economist Kurt Guidry wrote in the report. Another 35% is attributable to the loss of infrastructure such as fences, machinery, equipment and buildings. Sugarcane, fruit, vegetable and ornamental horticulture crops as well as livestock were affected too.

The $584 million figure includes Guidry’s estimates for impacts yet to fully play out, such as reduced yields for crops that remained in the field during the storm and have not been harvested, and the potential for increased production costs.

Guidry compiled the document using information gathered by AgCenter agents and commodity specialists around the state along with personnel with the Louisiana Department of Agriculture and Forestry and the U.S. Forestry Service.

Timber is Louisiana’s top-grossing agricultural commodity and is a significant economic driver in the Florida Parishes, where many pine trees snapped as Ida unleashed hurricane-force winds. A total of about 168,000 acres of trees were affected, costing the industry more than $300 million, Guidry said.

About 50% of the total estimated volume of damaged timber is in Tangipahoa Parish, he said.

It’s often difficult to salvage timber that falls during hurricanes. Only 1% to 2% of timber that fell during 2020 hurricanes Laura and Delta could be sold, according to an assessment by AgCenter economists Jinggang Guo and Joseph Chang.

“There is a short window that downed timber must be salvaged before disease and other quality impacts essentially makes this timber unmarketable,” the economists’ report says. “Also, typically when a weather event such as this occurs, the amount of timber that becomes available to the market can overwhelm the market, impacting both the prices received as well as the ability to sell timber.”

About 139,000 acres of sugarcane — a quarter of Louisiana’s total cane crop — are projected to have somewhat lower yields due to storm damage, Guidry said. He estimates the overall impact to cane producers to be about $35.4 million — about 7% of the total annual value of the industry, he said.

Much of the affected sugarcane is recovering and erecting itself after Ida’s strong winds blew stalks over. The crop’s resiliency, though, comes at a price.

“It’s a living thing. It’s a plant, so it’s going to use its energy to do that, and when that happens … then there’s less sugar,” said Renee Castro, an AgCenter area agent.

Harvest season could be more difficult and time consuming than usual, which also can translate to greater costs.

“Some of the leaves are shredded, the tops are brown and because of that, the ripener that they’re spraying on the cane at this time before harvest might not take,” Castro said.

Guidry did not include impacts to sugar mills in his estimate, but he noted that some of these facilities will lose revenue due to hurricane damage and the interruption in operations.

Southeast Louisiana is home to many fresh produce and ornamental horticulture growers. The storm has cost those sectors at least $9.5 million, Guidry said, most of which is tied to infrastructure damage.

“A lot of greenhouse roofs were damaged and need to be replaced,” said Will Afton, an AgCenter agent in St. Tammany Parish. “Plants were blown about, and the power outage really hit them hard. They need electricity to run irrigation pumps. Most have backup generators to use in this type of situation, but some of these devices hadn’t been used in a while, so kinks had to be worked out on the fly. It was a stressful situation.”

Most retail garden centers in Afton’s area are back up and running, he said. But they too had to deal with irrigation problems, plus power outages hampered financial transactions.

Guidry said he has heard few reports of animal losses that occurred during the storm. But the livestock death toll, currently estimated at 22, could grow because “given the difficult conditions and environments that continue to persist, there is some concern of future deaths as animals continue to be under considerable stress,” he said.

A more common problem on livestock operations is downed farm structures and fences.

In the hardest-hit parishes, which received wind gusts in excess of 100 mph, as much as 95% of farm infrastructure was destroyed. Pastures have been unavailable for grazing due to flooding, lack of fencing and piled up debris.

“Given the amount of infrastructure damage and the amount of cleanup required, many producers, especially older producers, have indicated they would likely liquidate their entire cattle operation,” Guidry said.

Guidry’s report did not cover fisheries; damage assessments for that industry are conducted by the Louisiana Department of Wildlife and Fisheries. The storm’s impact, however, has been significant for seafood operations.

“This storm was a monster,” said Thomas Hymel, an agent with the AgCenter and Louisiana Sea Grant. “It has just blown apart the supply chain, the infrastructure and the docks. Some of these places will take a long time to recover.”

He said repairs are underway at wharfs and docks, seafood processing plants and businesses like ice factories that supply fishermen with vital products.

“They are all ready to go back to work — those that can,” he said. 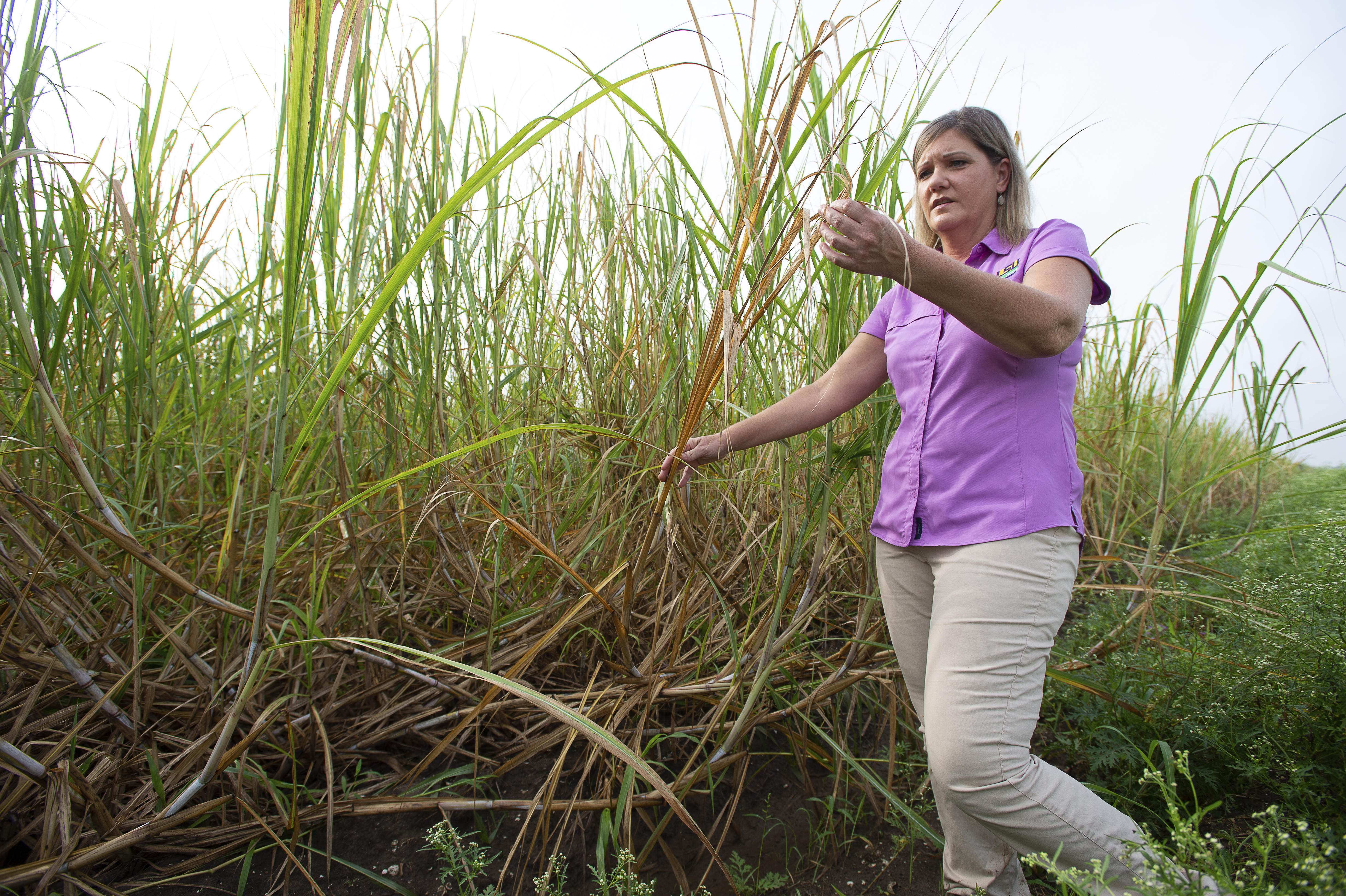 Renee Castro, LSU AgCenter area ag agent, examines shredded and browned tops of sugarcane that was impacted by Hurricane Ida’s strong winds in St. John the Baptist Parish, Sept. 8, 2021. Many cane stalks in this field, such as those to the left of Castro, were bent due to the wind impact. Photo by Olivia McClure/LSU AgCenter 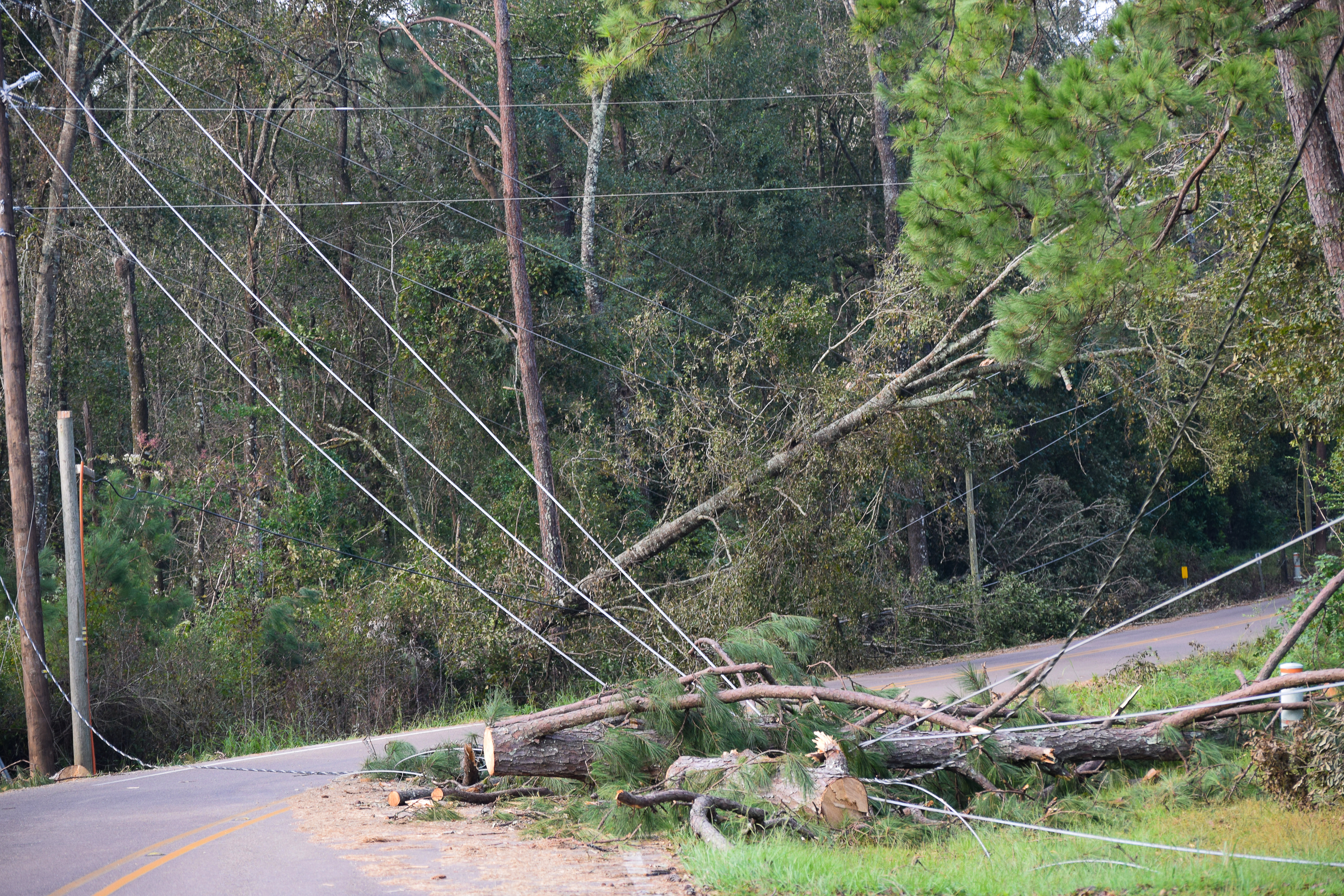