Attendees of the July 21 event included some from as far away as Seattle and the nation of Colombia as well as new LSU President William F. Tate IV. They braved hot weather and muddy conditions to hear about fertilization techniques, pest control, cover crops and the two new varieties.

L14-267 is the latest AgCenter release, while HoCP 14-885 is a U.S. Department of Agriculture variety. AgCenter sugarcane breeder Collins Kimbeng said both have shown promise in field trials.

“It has good sugar, good yield and good disease resistance,” Kimbeng said of L14-267. “Plant breeding is like finding a needle in a haystack. It takes about 12 years to get enough information to release a new variety, starting with 100,000 seedlings and going through numerous stages. By the time we release a new variety, we have good information about how it will perform.”

Head-to-head trials are conducted between prospective new varieties to determine which ones yield and perform best. Kimbeng called variety breeding the “lifeblood” of the industry, saying that Louisiana has almost doubled its sugarcane yields in the past 50 years.

AgCenter soil fertility specialist Brenda Tubaña discussed what she called “the most advanced research” she and her team are currently conducting: variable rate technology guided by remote sensors.

“In a nutshell, it is an applicator that variably applies nitrogen fertilizer depending on plant needs,” she said. “The resulting outcomes provide a more efficient application rate and better returns on yield and income as well.”

Tubaña’s team has developed a database that will allow them to address pressing issues that sugarcane growers are challenged with year after year, with a good example being the extensive recent rainfall.

“As of July 18, we’ve had about 55 inches of rain at the station,” she said. “A majority of that began in April, which is the time we usually start putting out our nitrogen fertilizer, so what happens if we are forced to delay the process? Since it’s so late, we wouldn’t want to over apply nitrogen fertilizer because it may have a negative effect on sucrose content.”

Research on pests and plant diseases is integral to a grower’s bottom line. AgCenter entomologist Blake Wilson and AgCenter pathologist Jeff Hoy went into detail about the current state of their studies.

“The two primary pests of sugarcane in Louisiana are the sugarcane borer and the Mexican rice borer, which has been an emerging threat over the past 10 years,” Wilson said. “Both insects have similar feeding habits with the larvae feeding inside stalks, thus preventing nutrients from moving up to the growing portions of the plant, which can greatly reduce yields up to 30%.”

One of the key pest management strategies is varietal resistance, with susceptible varieties seeing injury levels five to 10 times greater than resistant varieties, which often don’t require insecticides. At the research station, Wilson has intercropped corn on every fourth row of the sugarcane to create conditions of enhanced pest pressure.

“We plant the corn in the spring and, in the first week of June, we inoculate it with tens of thousands of sugarcane borer larvae from a laboratory-reared colony to feed on the corn,” Wilson said. “Then the adult moths will move into the sugarcane crops, simulating a natural pest migration. This allows us to better separate the different varieties and treatments in terms of where we see high levels of injury in our susceptible varieties relative to our resistant ones.”

On the disease front, Hoy echoed Wilson’s thoughts in that there are different approaches to control diseases. The first option, plant resistance, is a crucial trait for breeders.

“Resistance is the farmer’s favorite type of disease control measure,” Hoy said. “It imparts no direct cost or effort on their part to be effective. But what happens if there is no resistance?”

Hoy said there has been success with the seed cane program, which operates as a partnership between the AgCenter, the Louisiana Department of Agriculture and Forestry and two commercial companies. The program provides healthy planting material to growers to help control disease.

“It’s a lab process called tissue culture, producing plant material that doesn’t have the diseases,” he said. “The overall program is called seed cane certification, and if farmers obtain and plant healthy seed cane on a regular basis, it will control multiple diseases.”

AgCenter weed scientist Al Orgeron emphasized the importance of growing cover crops in the off season. He is examining different types of crops that can be used to prevent the erosion of fertile soils.

“We have a lot of opportunities to lose soil, and if you lose just about a dime’s amount each year, in 50 years, that’s about 2.5 inches of soil,” he said. “Furthermore, you have to consider the microbial community. In monoculture cropping systems such as sugarcane, microbial pathogens increase over time and can decrease growth in subsequent cane crops.”

Orgeron said planting broadleaf cover crops during the fallow period allows for a more diverse soil microbial community. Additionally, broadleaf crops have deeper roots than cane, so they pull nutrients from deeper layers of soil. Once terminated, they provide a nutrient source for subsequent cane crops. 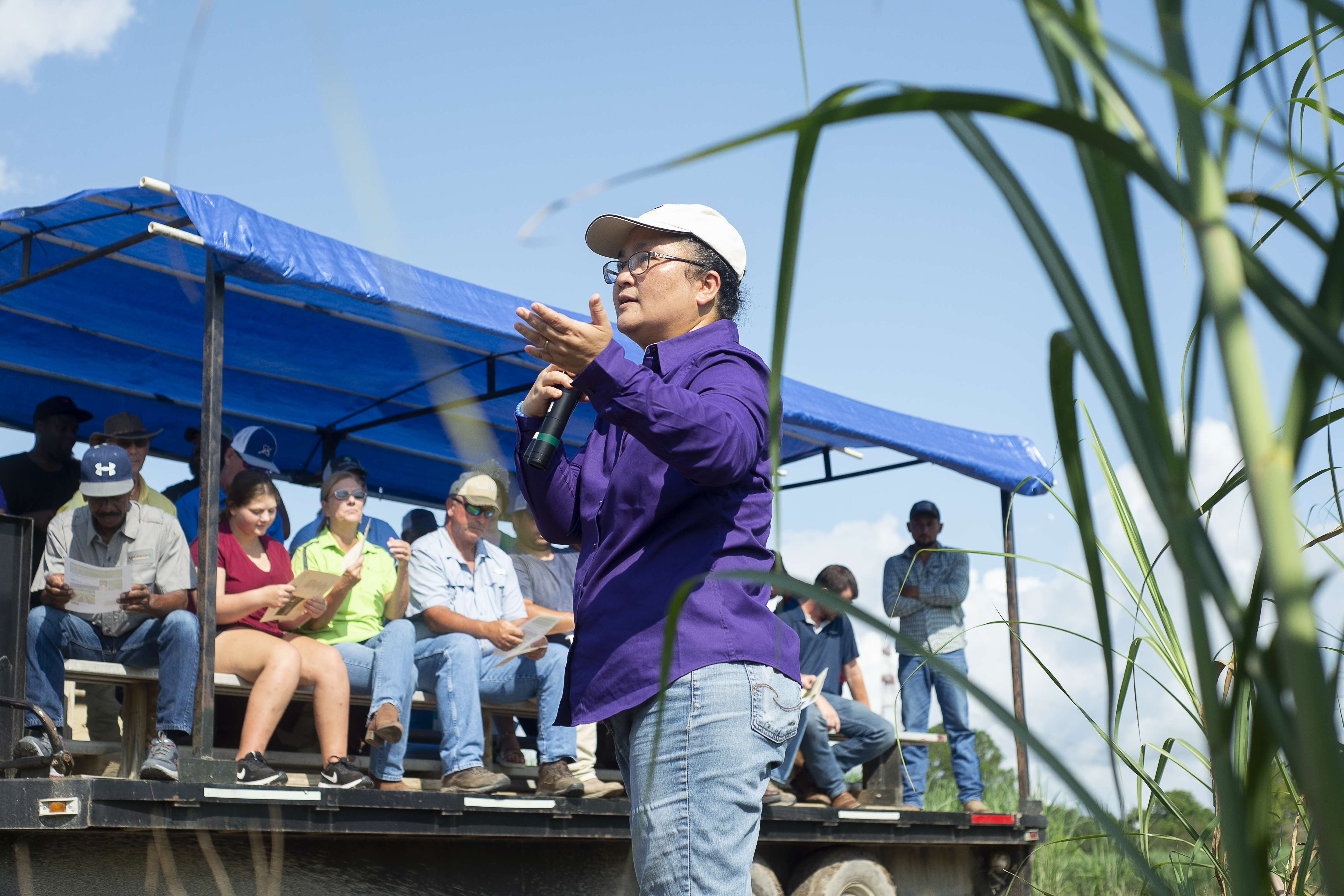 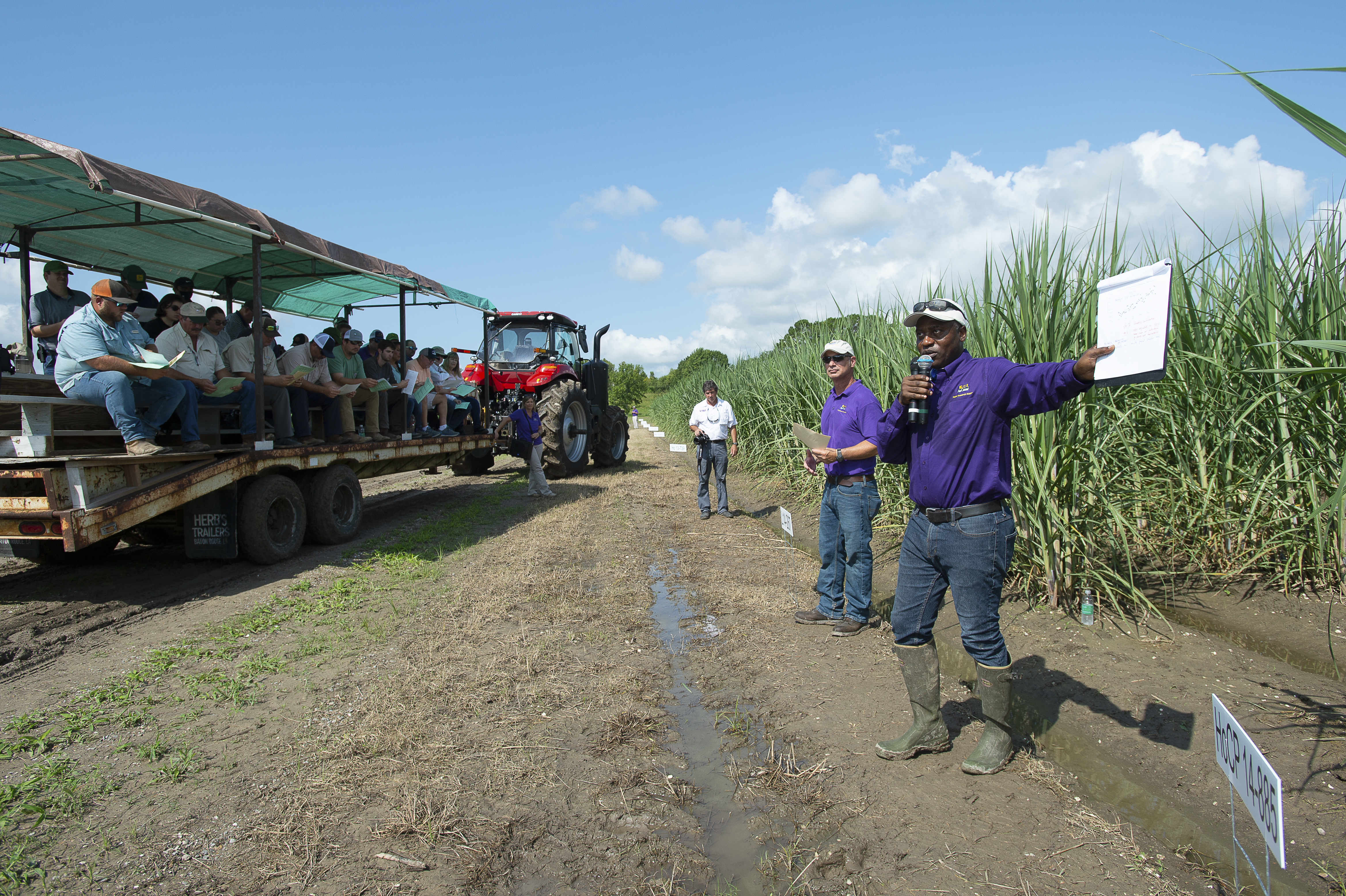 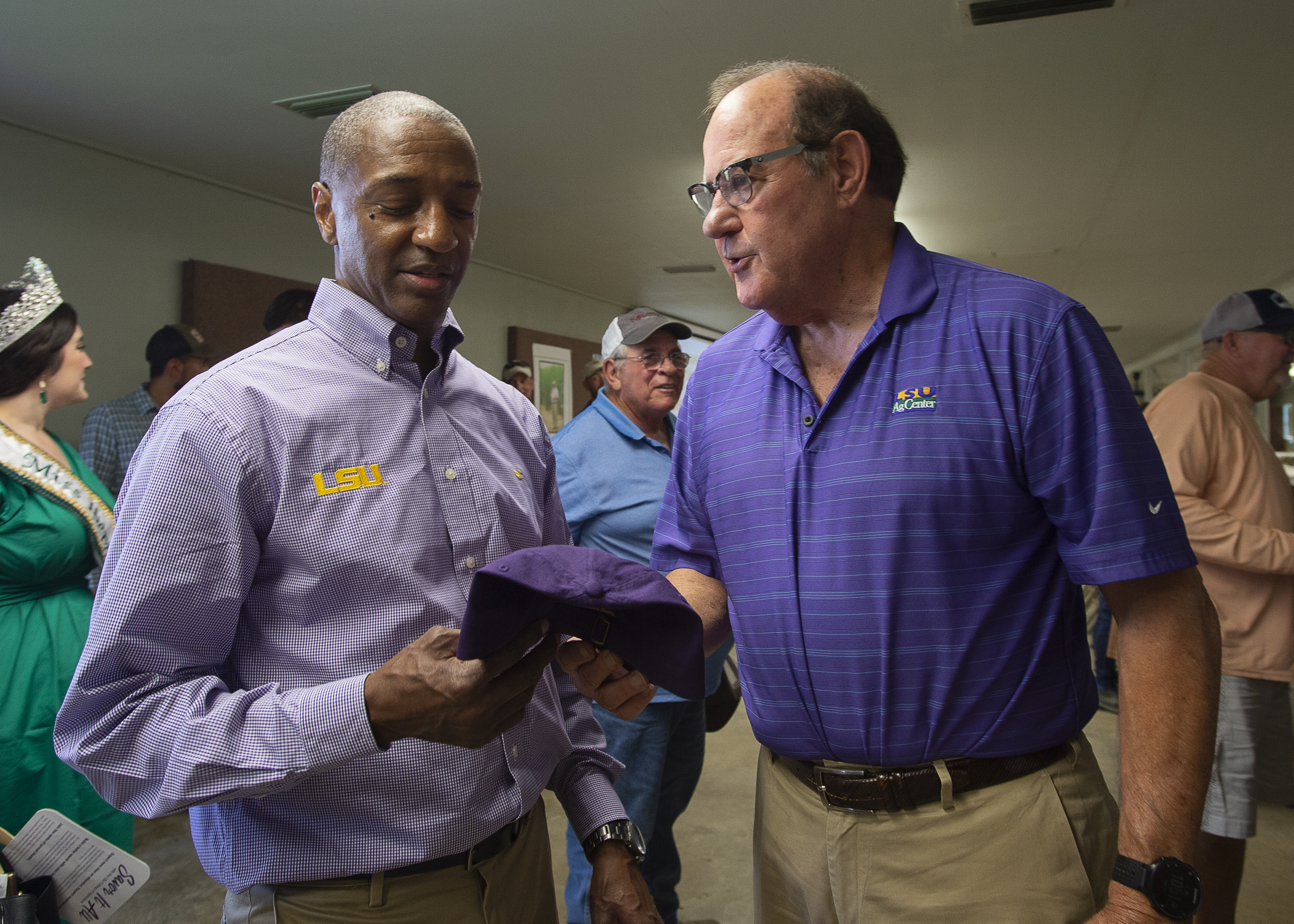 LSU President William F. Tate IV attended the sugarcane field day, being the first LSU president in recent memory to do so. He is pictured here with LSU Vice President for Agriculture Bill Richardson at the LSU AgCenter Sugar Research Station Field Day on July 21. Photo by Olivia McClure/LSU AgCenter