Hydrangeas start their beautiful display in May in Louisiana and the rest of the southeastern United States. A longtime staple of home gardens, hydrangeas are some of the most gorgeous blooming shrubs for the South.

There are hundreds of cultivars of about 70 species of hydrangeas found around the world. The common bigleaf hydrangea (Hydrangea macrophylla) — with its large, showy flowers and traditional blue and pink rounded cymes — can grow up to 8 inches long. Native to China and Japan, these varieties were brought to Europe in the 1770s by Swedish naturalist Carl Peter Thunberg and to the United States thereafter.

Other kinds of hydrangeas have been on the North American continent for millions of years. Fossil evidence of Hydrangea alaskana dating back to the Paleogene period (66 million to 23 million years ago) has been found in rocks at Jaw Mountain in Alaska.

We also have native hydrangeas, including the smooth leaf hydrangea (Hydrangea arborescens) and the oakleaf hydrangea (Hydrangea quercifolia). Their cultivation can be traced back to the estates of our nation’s forefathers: George Washington’s Mount Vernon, Thomas Jefferson’s Monticello and James Madison’s Montpelier. They received seeds from American botanist William Bartram, who ran Bartram’s Nursery in Philadelphia with his father, John Bartram.

These gorgeous shrubs have a longstanding history around the world and are adored by many. The Royal Horticulture Society named the Runaway Bride hydrangea Plant of the Year in 2018. In 2014, the Miss Saori cultivar received the same award.

Bigleaf hydrangeas are deciduous shrubs native to East Asia that grow well in USDA hardiness zones 5 to 9. They prefer partial sun and regular watering that should become more frequent during extreme heat. They grow well in both alkaline and acidic soil.

In acidic soils, the blooms are blue, and in alkaline soil, they are pink. Penny Mac is a bigleaf hydrangea named after Penny McHenry, the founder of the American Hydrangea Society, and is a selection of the Louisiana Super Plants program. Penny Mac sports large, rounded clusters of flowers referred to as mopheads. These are blooming now and will bloom again in the fall. They grow 4 to 6 feet tall by 3 to 4 feet wide.

Oakleaf hydrangeas are native to the southeastern United States from Georgia and Florida to Louisiana. They are a deciduous shrub commonly found growing in hardwood forests, on bluffs and shaded ravines, and along sandy streams as an understory shrub to oaks and pines.

They look healthiest when grown in well-drained, fertile, acidic soils in shade with some morning sunlight. Leaves have an oak-like appearance, lending the plant its name. Flowers are creamy white, elongated panicles up to 12 -inches long. Oakleaf does not perform well in heavy clay soils, as it prefers a sandy loam.

Panicle hydrangeas (Hydrangea paniculata) are some of the easiest to grow. They are the most sun-, cold- and heat-tolerant hydrangeas available. They can take six or more hours of sun. In our climate, they prefer morning sun with afternoon shade and tolerate most any type of soil.

Limelight hydrangea is a Louisiana Super Plant, and it is one stunning plant. These deciduous shrubs can grow as tall as 8 feet in height and grow up to 8 feet wide. They can tolerate full sun but prefer mostly sun with shaded afternoons. The gorgeous white flowers have a light green tint. Limelights can be planted as a specimen plant in landscape beds, or you can make a dramatic statement by grouping several together for a stunning display.

The final group is the smooth leaf hydrangeas (Hydrangea arborescens), which also are a deciduous understory shrub. They can be found growing as far north as New York down south to Florida and westward to Texas. Smooth leaf hydrangeas prefer shaded areas, as do most other hydrangeas. They grow in a range of soil types but prefer cool, moist and well-drained areas. Flowers come in colors of white, blue and pink and are slightly flattened in rounded clusters. Annabelle is a cultivar that has almost pure white blossoms that form rounded globes of up to 10 inches.

Hydrageas make wonderful landscape specimens and can really make a house a home. They grow well in the garden and in containers. One of the most popular cut flowers, hydrangeas are frequently used in wedding bouquets and flower arrangements. Plant one at your home so you too can share and enjoy these gorgeous blossoms.

Oakleaf hydrangeas have large leaves that resemble those of oak trees. Photo by Heather Kirk-Ballard/LSU AgCenter 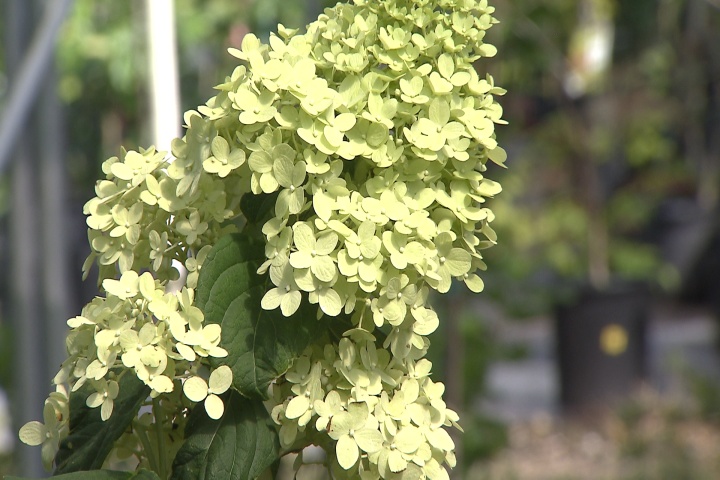