Louisiana Farm Labor -- New and Beginning Producers in Louisiana: Highlights From the 2017 Census of Agriculture 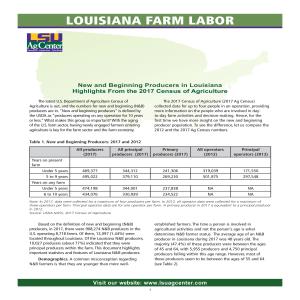 The latest U.S. Department of Agriculture Census of Agriculture is out, and the numbers for new and beginning (N&B) producers are in. “New and beginning producers” is defined by the USDA as “producers operating on any operation for 10 years or less.” What makes this group so important? With the aging of the U.S. farm sector, having newly engaged farmers entering agriculture is key for the farm sector and the farm economy.

The 2017 Census of Agriculture (2017 Ag Census) collected data for up to four people in an operation, providing more information on the people who are involved in day-to-day farm activities and decision-making. Hence, for the first time we have more insight on the new and beginning producer population. To see the difference, let us compare the 2012 and the 2017 Ag Census numbers.

Demographics. A common misconception regarding N&B farmers is that they are younger than more well-established farmers. The time a person is involved in agricultural activities and not the person’s age is what determines N&B farmer status. The average age of an N&B producer in Louisiana during 2017 was 48 years old. The majority (47.4%) of these producers were between the ages of 45 and 64, with 5,955 producers and 4,750 principal producers falling within this age range. However, most of these producers seem to be between the ages of 55 and 64 (see Table 2).

The majority of the N&B producers in Louisiana were white, with 11,897, which is about 91%. Moreover, 91.37% of the white N&B producers indicated that they were principal producers. The Ag Census reported that Black or African American were about 7% and Spanish, Hispanic or Latino were around 2%. The next cohort, American Indian or Alaska native, were close to 1% of the Louisiana N&B producers. Asian and native Hawaiian or other Pacific Islander had the smallest concentration of N&B producers with 28 and 5 producers, respectively. Table 3 provides the numbers by each group.

Farm Operations at a Glance

Farm Size. In total, there were 8,718 farms operated by new and beginning farmers. New and beginning principal producers operated 7,796 farms throughout Louisiana. These farms varied in size, the most common farm size being between 10 and 49 acres (see Table 4).

The cost of purchasing land can be a deterrent for N&B farmers. In addition, negotiating affordable leasing options can be a challenge. Louisiana N&B producers were found to own more land than leasing land; 7,777 individuals owned the land in their farms, and only 2,524 people rented or leased the land in which their farm was located. Full owners of farmland totaled 6,194 farmers.

Loans and Federal Farm Program Payments. This section accounts for extra payments received by Louisiana new and beginning farmers. Most new and beginning farmers, (1,642 in the Census of Agriculture), received federal farm payments other than CCC and conservation loans. The specifics of these payments are not specified in the aggregate data. In addition, 619 producers and 553 principal producers received payments related to land conservation, which is an important feature of Louisiana (see Table 6).