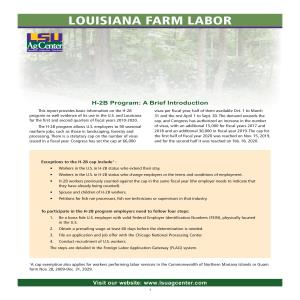 This report provides basic information on the H-2B program as well evidence of its use in the U.S. and Louisiana for the first and second quarters of fiscal years 2010-2020.

The H-2B program allows U.S. employers to fill seasonal nonfarm jobs, such as those in landscaping, forestry and processing. There is a statutory cap on the number of visas issued in a fiscal year. Congress has set the cap at 66,000 visas per fiscal year, half of them available Oct. 1 to March 31 and the rest April 1 to Sept. 30. The demand exceeds the cap, and Congress has authorized an increase in the number of visas, with an additional 15,000 for fiscal years 2017 and 2018 and an additional 30,000 in fiscal year 2019. The cap for the first half of fiscal year 2020 was reached on Nov. 15, 2019, and for the second half it was reached on Feb. 18, 2020.

Exceptions to the H-2B cap include1 :

To participate in the H-2B program employers need to follow four steps:

The H-2B application screening process for federal agencies is depicted below.

Louisiana is in the top six positions of states of H-2B employment. In fiscal year 2018, the state was in the fourth position with 5,341 certified workers, a 3.6% of the total positions. In fiscal year 2019, we saw fewer positions certified. There were 4,924 in total, accounting for 3.3% of total certified positions, bringing Louisiana in the sixth spot. Based on the latest data, the state is ranked in the fourth position, with 5,974 certified workers, accounting for 4.7% of the total certified positions for the first and second quarters of fiscal year 2020. A total of 225 positions were not under the cap restrictions. Top positions for the state are landscape laborers, crawfish and seafood processors, and fish cutters and trimmers.