Roger P. Hamilton Jr. is a 4-H alumnus who has remained active in 4-H as a parent and now serves as the vice chair of the Louisiana 4-H Foundation board. He believes 4-H has power to encourage social skills and interpersonal relationships between youth and their adult mentors. 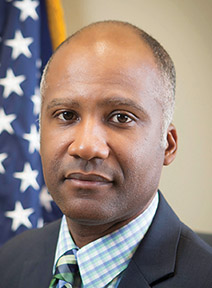 As a 4-H youth, Hamilton gained leadership and life skills that continue to benefit those he serves in his adult life. Hamilton acquired public speaking experience as a youth that he uses every day as a lawyer and assistant district attorney. He has served in numerous 4-H youth leadership positions, such as club officer roles and camp counselor, and he actively participated in community service projects.

During his professional career, Hamilton has been a prosecutor in district attorney offices in Louisiana’s 15th and 16th judicial districts since 2002. He is the city attorney for Jeanerette and previously served as the Lafayette Parish School Board attorney. He has also been an adjunct professor at South Louisiana Community College and Nicholls State University. His considerable legal background has made Hamilton an invaluable policy adviser to 4-H staff and foundation trustees as we position the Louisiana 4-H Foundation among the fastest growing state foundations in the nation.

Hamilton is a past president for the Nicholls State University Alumni Federation Board. He is a past member of the Iberia 4-H Advisory Committee and has served on the Diocese of Lafayette Diocesan Pastoral Council and the Campaign Against Poverty. He currently serves as a volunteer middle school girls basketball coach at Catholic High School of New Iberia. He has one daughter, Regan Paige Hamilton.

Under the guidance of current board Chair Yvonne Normand, the 4-H Foundation is defining its financial goals based upon enhanced relationships. Over the next several months, Roger Hamilton will further Yvonne’s work as he travels across the state with Louisiana 4-H Foundation Executive Director Patrick Tuck to learn firsthand about the needs of our program in every region. He will also seek out past foundation board chairs to ask for their help as we embark upon a capital campaign to benefit our contests and awards programs and to significantly improve facilities at our most treasured Louisiana 4-H venue, the Grant Walker Educational Center.

Cobb’s time in 4-H began long before he was of age to join. His mother was the 4-H leader at her school, and Cobb was frequently involved in club activities. Cobb joined 4-H in third grade and remained a 4-H leader throughout his pre-college years. Cobb grew up in Pine Grove on the family farm with his parents and younger brother. They raise beef cattle and bucking bull stock for stock contractors in the region. All of Cobb’s free time during his youth was dedicated to 4-H and FFA. Prior to becoming 4-H state president, he served as president of the Walker High School FFA Chapter, FFA Area IV treasurer and leader assistant of Walker High School 4-H. He was also a Livingston Parish shooting sports program member for seven years and served on the state 4-H Executive Board for several years, including a term as vice president. Cobb competed at the 2018 National Shooting Sports Finals in Nebraska in the archery, rifle and shotgun disciplines. He served as a Livingston Parish 4-H junior leader throughout middle school and high school. The club’s focus areas were animals in the community and local animal shelters.

He also said he had “a lot of fun in 4-H.” He enjoyed every aspect from shooting sports and showing livestock to improving his leadership skills. He looks forward to investing his time in 4-H for years to come. He continues to serve on the Livingston Parish Advisory Council to help make 4-H better.

Cobb began his agribusiness major studies at LSU in the fall 2019 semester after over a decade in a 4-H career that epitomized youth voices and youth leadership. He was honored at the 4-H University Awards Banquet in the spring of 2019 as recipient of the Lyle Maier “Tinker” Bayle LSU Foundation Scholarship.