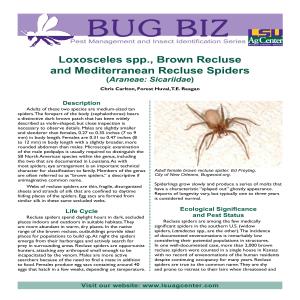 Adults of these two species are medium-sized tan spiders. The forepart of the body (cephalothorax) bears a distinctive dark brown patch that has been widely described as violin-shaped, but close inspection is necessary to observe details. Males are slightly smaller and slenderer than females, 0.27 to 0.35 inches (7 to 9 mm) in body length. Females are 0.31 to 0.47 inches (8 to 12 mm) in body length with a slightly broader, more rounded abdomen than males. Microscopic examination of the male pedipalps is usually required to distinguish the 58 North American species within the genus, including the two that are documented in Louisiana. As with most spiders, eye arrangement is an important technical character for classification to family. Members of the genus are often referred to as “brown spiders,” a descriptive if unimaginative common name.

Webs of recluse spiders are thin, fragile, disorganized sheets and strands of silk that are confined to daytime hiding places of the spiders. Egg sacs are formed from similar silk in these same secluded webs.

Recluse spiders spend daylight hours in dark, secluded places indoors and outdoors in suitable habitats. They are more abundant in warm, dry places. In the native range of the brown recluse, outbuildings provide ideal places for populations to build up. At night the spiders emerge from their harborages and actively search for prey in surrounding areas. Recluse spiders are opportunist hunters, attacking any arthropod small enough to be incapacitated by the venom. Males are more active searchers because of the need to find a mate in addition to food. Females produce egg sacs containing around 40 eggs that hatch in a few weeks, depending on temperature. Spiderlings grow slowly and produce a series of molts that have a characteristic “splayed out” ghostly appearance. Reports of longevity vary, but typically one to three years is considered normal.

Recluse spiders are among the few medically significant spiders in the southern U.S. (widow spiders, Latrodectus spp., are the other). The incidence of documented envenomations is remarkably low considering their potential populations in structures. In one well-documented case, more than 2,000 brown recluse spiders were counted in a single house in Kansas with no record of envenomations of the human residents despite continuing occupancy for many years. Recluse spiders are true to the common name. They are shy and prone to retreat to their lairs when threatened and possess extremely small fangs suited only to penetrating and subduing small prey. The searching, wandering behavior of the species and episodes of cleaning and rearranging areas where the spiders live account for most cases of contact with humans. Most cases of brown recluse bites are misdiagnoses by physicians or self-diagnoses by individuals suffering from skin lesions. Nevertheless, cases of localized skin necrosis following recluse bites can and do occur, and medical intervention is required in these cases. In extremely rare cases, serious systemic reactions have been documented. Documented cases of recluse envenomations are more much more frequent for the brown recluse than the Mediterranean recluse, probably because of the wider distribution and larger populations of the brown recluse in the U.S.

In Louisiana, brown recluses are common in the northern half of the state approximately north of a line drawn through Alexandria. The species is exceedingly uncommon in southern Louisiana. The Mediterranean recluse is native to central Europe and has been introduced to many areas of the U.S., especially in urban environments, presumably by human transport. The species has been documented sporadically in the vicinity of New Orleans but may be found almost anywhere as small, isolated populations in outbuildings and residences.

Widespread misidentifications and the previously mentioned misdiagnoses of skin lesions presumed to be caused by recluse bites have led to the belief that these spiders are much more common than the evidence suggests. In particular, misdiagnoses of “brown recluse bites” outside the known range of occurrence gives the mistaken impression that the brown recluse is present throughout the U.S. The actual native range is limited to the midwestern and east central states of the U.S. Louisiana is unusual in having a split pattern, with brown recluse spiders present and common in the north and extremely infrequent in the south. The species most commonly misidentified as recluse spiders in Louisiana is the southern house spider (Kukulcania hibernalis), although almost any species of brown spider is likely to be accused of being a brown recluse because of erroneous information on the internet and social media outlets.

Correct identification by a qualified entomological diagnostician of suspected recluse spiders is an essential first step in threat assessment and decision making about management of populations. Isolated occurrences of recluse spiders in residences is to be expected in areas where they are known to occur and should not be cause for alarm. Large infestations can be managed by a combination of treatment by a pest control professional and attention to eliminating entry points to prevent prey from entering the residence or other structure.