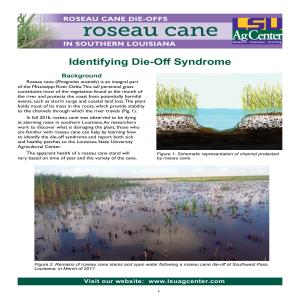 Roseau cane (Phragmites australis) is an integral part of the Mississippi River Delta. This tall perennial grass constitutes most of the vegetation found at the mouth of the river and protects the coast from potentially harmful events, such as storm surge and coastal land loss. The plant holds most of its mass in the roots, which provide stability to the channels through which the river travels (Fig. 1).

In fall 2016, roseau cane was observed to be dying at alarming rates in southern Louisiana. As researchers work to discover what is damaging the plant, those who are familiar with roseau cane can help by learning how to identify the die-off syndrome and report both sick and healthy patches to the Louisiana State University Agricultural Center.

The apparent health of a roseau cane stand will vary based on time of year and the variety of the cane.

The most extreme examples of roseau cane die-off are characterized by patches of open water in areas that were once dominated by the grass (Fig. 2). Often, broken and dead stems are visible above the soil or water surface.

As roseau cane dies it is replaced by floating aquatic vegetation, such as water hyacinth and common salvinia. These plants do not perform the same ecological functions that the root-heavy roseau cane does, leaving the marsh susceptible to erosion, storm surge and habitat loss (Fig. 3).

These stands located at the Southwest Pass of the Mississippi River Delta remained healthy throughout the year as evidencd by the density of the stand, the presence of green leaves in fall, and no visible lodging or collapsing of stems (Fig. 4).

Figure 4. Healthy roseau cane at the Southwest Pass of the Mississippi River Delta has abundant regrowth in the spring (a). By fall the same stand remains dense and stems have not begun to die or collapse (b). Differences between summer and fall include some browning of leaves (c). Except for very cold winters, plants do not show complete loss of green leaves (d). Photographed at Southwest Pass, Louisiana, in August 2018.

An unhealthy stand of roseau cane does not maintain dense green stems in fall and winter. Patches of open water within the stand will expand over subsequent seasons as spring regrowth becomes less vigorous.

Figure 5. The outer edges of a roseau cane stand can appear green and healthy in the summer (a) but hide an ever-expanding area of open water (b and c) that will not return with the same vigor the following year (d). Photographed at Pass-a-Loutre Wildlife Management Area, Louisiana, August 2018.

Characteristics such as plant height and presence of flower heads are not always a good indication of roseau cane health because they can appear at different times of the year in the four roseau cane varieties (Fig. 6).

Figure 6. The Greeny variety of roseau cane in the foreground appears much shorter, its leaves contain a bluish hue and the plants flower much earlier in the year in comparison with the taller Delta variety visible in the background. Photographed at the Pass-a-Loutre Wildlife Management Area, Louisiana, August 2018.

Another visual aid used to assess roseau cane health is to determine at how much of the stem has fresh green leaves versus deteriorated brown leaves. This assessment should be made with mature (taller) stems instead of smaller stems that may represent new shoots and should be looked at from the perspective of the entire stand. It is more effective to make this assessment in late summer and fall when new shoots are less common. If less than 25 percent of the stem maintains green leaves, the stand can be classified as “unhealthy” (Fig. 7).