After two tough years, 2018 rice crop ‘good but not great’ 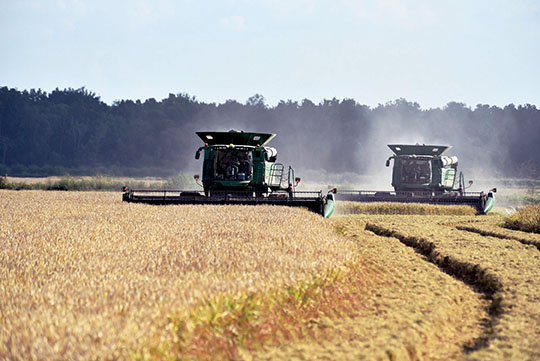 Two combines harvest rice on the Woodsland Plantation near Monroe. The 2018 crop
turned out to be above average, exceeding the harvests of the past two years.

After two challenging years, most Louisiana rice farmers had a good crop in 2018.

For the first time in three years, Louisiana rice farmers did not have to deal with a tropical weather system.

“Good but not great,” is how Don Groth, resident coordinator of the H. Rouse Caffey Rice Research Station, described the 2018 crop.

Groth anticipates the average yield in Louisiana will exceed 7,000 pounds an acre — less than the record of 7,600 pounds in 2013 but better than the past two years, which were less than 7,000 pounds. An excellent ratoon crop could push the crop to the state’s second-best overall harvest, said Dustin Harrell, the LSU AgCenter rice extension specialist.

“I hardly saw any stink bugs this year,” he said.

Harrell expects the state’s rice acreage to be about the same in 2019 but that could change.

“It’s too early to predict anything because the market could change between now and then,” he said.

Northeast Louisiana growers have the flexibility to shift to other commodities if those prices improve, he said, and it’s possible that soybean acreage there could shift to rice if soybean prices remain low. He expects more acreage in northeast Louisiana to be grown in furrow-irrigated rice, which is also called row rice. The amount grown with that practice doubled in the past year.

“They had a little bit of everything thrown at them,” he said. “Overall, I think most producers had good rice crops, and most were happy with the yields they had.”

He said farmers are now looking at cutting expenses without risking production levels.

Producers were generally pleased with the outcome, but they were hoping for better prices.

Crop consultant B.D. Fontenot said rice farmers had a better-than-average crop. He said sheath blight became a problem for some that could not be controlled with Amistar Top fungicide, but an earlier application is probably needed, he said. Insects were not as much of a problem, he said.

“I don’t think the rice acreage is going to change a whole lot next year,” Fontenot said.

Across the state, rice producers saw slight differences in conditions and outcomes.

Jeremy Hebert, an LSU AgCenter agent in Acadia Parish, said growers there had a good year.

“It wasn’t a record year,” he said, “but we had some extremely high yields this year.”

Growing conditions were good, and grain quality was very good, Hebert said. Rain and reduced sunshine at pollination didn’t seem to have as much of an effect as expected. Yields were mostly in the upper 40-barrel range (more than 145 bushels or 65 cwt.) with some in the upper 50s (more than 180 bushels or 80 cwt.). He said disease was mild.

“The pressure wasn’t as bad as we thought because we had a lot of rain in June,” he said.

Insect pressure was light, Hebert said, and most growers did not spray for stink bugs.

Second crop reports also were good, he said, with many growers reporting 28 barrels (100 bushels or 45 cwt.).

“There are second-crop fields that look like first-crop fields,” Hebert said.

Rice acreage in Acadia Parish probably will stay about the same, Hebert said, but he expects crawfish acreage to increase in 2019.

“Farmers seem optimistic for next year,” he added.

Frances Guidry, an LSU AgCenter agent in Jefferson Davis Parish, said main crop yields there were mostly in the 40-barrel range, and second-crop yields were around 15 barrels (54 bushels or 24 cwt.).

“It was a good year,” she said. “Better than the past couple of years.”

“It’s better than the last two years,” he said.

Some had excellent first crop yields for Vermilion Parish, he said, with a few making over 50 barrels (180 bushels or 81 cwt).

Fields that could be mowed or rolled after the first harvest were having “decent” second-crop yields 5 to 7 barrels higher, he said.

He agreed that disease and insects were not as much of a problem.

To cut costs, Granger said many farmers have returned to conventional varieties, such as Cheniere and Mermentau, with pinpoint flooding even though the yield might only reach 40 barrels (145 bushels or 65 cwt.).

“They’re trying to make as cheap of a crop as possible,” he said.

For 2019, Granger expects acreage to remain about the same. Vermilion Parish rice acreage increased by almost 4,000 acres in 2018 from the previous year to a total of 49,182.

Christian Richard of Vermilion Parish said his crop was slightly above average.

Richard said a dry May and June on his farm were followed by a wet July.

“Once August started, it seemed like it rained every day,” he said.

That continuous rain complicated harvest, he said. He was late getting started on harvesting a second crop because he ran out of bin space because of soybeans he hadn’t been able to sell.

“Who would have thought we could not get rid of one of the better bean crops we ever had?” he said.

Richard said he will continue with the same amount of rice acreage in 2019, and he anticipates a larger percentage will be planted in Provisia to address weedy rice problems.

Jimmy Meaux, an LSU AgCenter agent in Calcasieu Parish, said the 2018 crop there was average — a bit better than the previous year.

He estimated the average yield to be slightly above 40 barrels. Some areas in southwest Louisiana were hit with heavy rain at flowering, which affected yield, he said.

He expects 2019 rice acreage to remain about the same and possibly increase because of an anticipated decrease in soybean plantings.

Keith Collins, an LSU AgCenter agent who works with rice farmers in northeast Louisiana, said farmers there made a good crop, but the harvest was complicated.

“It just kept raining,” he said. “We just had adverse weather at harvest.”

Some farmers were delayed as long as a month to get their crop out of the fields, he said, and that affected quality. He expects an increase in rice acreage in the northeast part of the state because of low prices for other commodities.

“I think the majority of that is going to be with row rice,” he said.

Garrett Marsh of Madison Parish was pleased with his crop.

“We probably had one of the better yields we’ve had,” he said.

He said his hybrid crop of more than 300 acres produced an average of about 200 bushels. He said he had to leave about 30 acres that stayed wet too long in the field.

Marsh said he grew all his crop using the row rice system because it saves money on pumping costs and on land work. He said he will plant rice next year, but he’s not sure how much because of the uncertainty with most commodities now.

“Across the board, yields are down a little bit, but they are still good,” he said.

Fontenot said farmers had to pump through much of the summer to keep fields flooded because of excessively dry weather.

“It’s going to be an expensive year,” he said.

He said more farmers seemed to have problems with weedy rice, and longer times to flood up fields that had dried may have allowed weeds to gain a foothold.

Night temperatures were high early in the season, and that could have affected yield, he said, but disease and insect pressure were light. Like other areas, the harvest in Evangeline Parish was hampered by rain, he said.

Fontenot expects Evangeline Parish acreage to slip in 2019 or remain the same because of prices.

“Some are saying they are not going to plant because of the price except where they have crawfish,” he said.

Ross Thibodeaux, who farms in the Midland area, said the first crop probably averaged 50 barrels, and the second crop average could be as high as 30 barrels.

“It was a pretty good year,” he said.

But Thibodeaux couldn’t say the same thing about what he got for his crop.

“The price needs to go back up where it started this year,” he said.