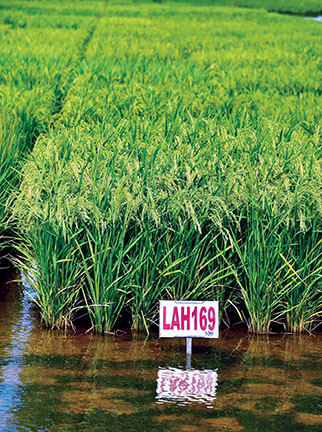 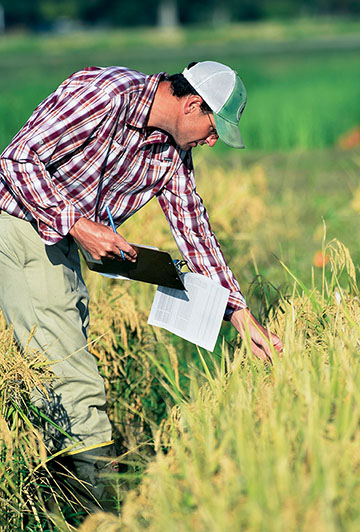 LEFT: The hybrid LAH169 has been developed with an emphasis on quality, with good disease resistance and yields exceeding 9,000 pounds per acre in Louisiana trials. Bids are expected to be solicited this spring with the anticipated production of more parental seed in Puerto Rico. RIGHT: Adam Famoso, LSU AgCenter rice breeder, evaluates lines of rice in small plots at the H. Rouse Caffey Rice Research Station. In addition to developing new varieties of Provisia and Clearfield, Famoso is also working to develop conventional varieties.

A significant portion of the research station’s mission is to provide farmers with more improved options to consider at planting time.

Oard said this hybrid has good grain quality with low chalk. Because it is early maturing, it will have good ratoon potential, he said. It has good disease resistance, making it attractive to farmers who grow row rice, he said.

Hurricane Maria caused a delay in the 2018 planting of the parents of LAH169, which resulted in an insufficient amount of seed to bring this hybrid to the marketplace. Rogers Leonard, LSU AgCenter associate vice president, said bids for LAH169 will be solicited this spring after more parental seed is obtained from Puerto Rico, which is expected in March.

“The goal is to move them along as quickly as possible,” he said.

Oard said he is also working on developing sheath blight-resistant lines of nonhybrid rice, and five lines will be advanced in 2019 for a preliminary yield trial by LSU AgCenter rice breeder Adam Famoso.

“This is our best-looking material so far, as far as sheath blight tolerance,” Oard said. “If they meet our threshold for acceptance, we will use them as crosses for parents.”

The next potential Provisia variety, PVL108, was planted on Oct. 2 on a 7-acre field in Puerto Rico for a seed increase. It could

be available for a limited commercial release in 2020.

In past years, PVL108 out-yielded PVL01 by 10 percent, according to Famoso. However, this year’s yield from PVL108 was the same as PVL01, as PVL01 demonstrated improved yields in 2018 over the previous years.

“Additionally, PVL108 has consistently demonstrated an improved ratoon yield over the last three years, with an average ratoon yield advantage of 20 percent over PVL01,” Famoso said.

The quality of Provisia is excellent, he said.

“Both lines exhibit low chalk and are consistently among the lowest chalk lines compared to all the other varieties on the market,” Famoso said. “Work is also underway for a third generation of Provisia, with the emphasis on increasing yield and blast resistance.”

Famoso said two conventional lines that out-yielded varieties such as CL153, CL111 and Cheniere and produced more than 9,000 pounds per acre will undergo continued statewide testing and initial seed purification in 2019. One of the lines is a cross between Cheniere and Mermentau.

“If they continue to perform as well, it’s very likely they will be candidates for release,” he said.

Two Clearfield long-grain lines were tested for a third year in 2018. Both have good blast resistance, and one could be a candidate for limited release in 2020.

The breeding program has improved its efficiency. In 2018, 42,000 progeny rows were planted, about 40 percent fewer than in previous years, Famoso said.

“We’re reallocating some resources to have more early generation selection at the F2 stage with markers and more yield test plots in multilocation testing,” he said.

In 2018, an additional test, the regional yield test, was added. It includes 150 entries tested across five locations in Louisiana.

“This is a significant increase in the amount of materials tested in multi-location testing, but multilocation testing is critical to getting a good understanding of an experimental line’s potential, and the more lines we test, the more likely we are to find a winner,” Famoso said. 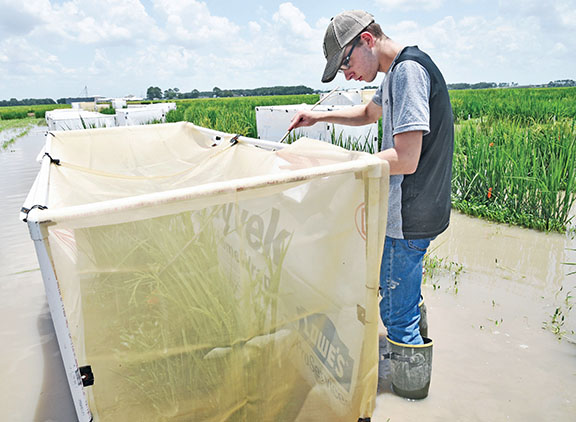 Student worker Zach Hanks uses a stick to distribute pollen from a male sterile plant onto a recipient plant
to make a hybrid. The hybrid breeding project is working to develop commercially available hybrids
with improved grain quality.