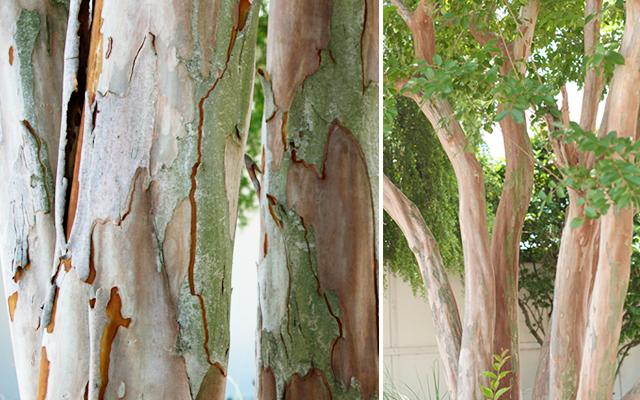 When selecting trees for the lawn most people look at the foliage and flowers as desirable characteristics. Some trees also have interesting bark that adds greatly to their appeal.

This year we have had enough rain that crape myrtle trees are shedding their bark to reveal an inner bark layer that many times is even more colorful. The natural process of bark peeling off in thin layers is known as exfoliating bark. While all crape myrtles have exfoliating bark it is the ones with the most color contrast that get your attention.The variety, Natchez, has a stark cinnamon under bark that is very attractive against its white flowers.

You have to get enough rain for the bark to expand and shed. In addition to crape myrtles, drake elm is another tree with a distinct contrast. Drake elm has bright orange under bark. Other popular trees that have unique peeling bark would include sycamore, river birch, bald cypress, other Chinese elms and eastern red cedar.

Since the process is naturally occurring, you should not be tempted to help the process along. You could prematurely pull bark off that will damage the tree.

You may find that trees, such as drake elm, have to be 4 to 5 years old before they actually start shedding their bark. It also appears that many species will not shed their bark every year, more like every other year and only then when you have adequate rain.

Exfoliating can be used as a survival tool by those trees that have that trait to rid themselves of insects, lichen, fungi, bacteria and mosses.

It is a point of interest in a tree that many find attractive and gives you another feature to enjoy. 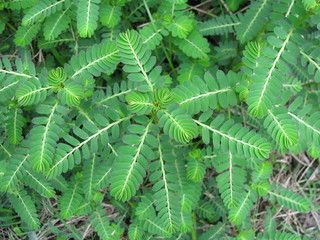 August seems to always bring about a large invasion of the weed, Chamberbitter.

You probably do not know it by that name, but most people describe it as a weed that looks like a little mimosa tree. I can relate since chamberbitter has 2 rows of leaves on each branch and does resemble a tiny mimosa tree.

Chamberbitter is a summer annual and it grows in abundance in flower beds, lawns, cracks in the concrete and flower pots. As is usual with most problem weeds, it is a heavy seed producer. If you look on the back of the leaflets you will see a row of what looks like a seeds along the stem. Those are actually seed pods and inside of every seed pod is six seeds. You can begin to understand why you see so many of these weeds.

Since chamberbitter is an annual plant, the plant dies at the end of the growing season and is regenerated next year from seed. The normal pre-emerge chemicals that we use in flower beds are not great on this weed. The best method of control is to pull the existing plants up by hand now. They pull up very easily.

Be sure to put every rouged plant in the garbage can. This will help to eliminate the seed source. If you let plants fall to the ground, you are just reseeding the weed. Next, apply a heavy layer of mulch. The best and easiest control is to block any direct sunlight from the seed. Mulching will block sunlight and prevent seed germination.

If you have a fallow area, you can use a glyphosate herbicide but this is a non-selective herbicide that will kill whatever you spray. Glyphosate is a good application for a garden that might not be planted for at least 21 days.

For more information on these or related topics contact Kenny at 225-686-3020 or visit our website at www.lsuagcenter.com/livingston.