Toxicants in Feeds, Hay and Forages 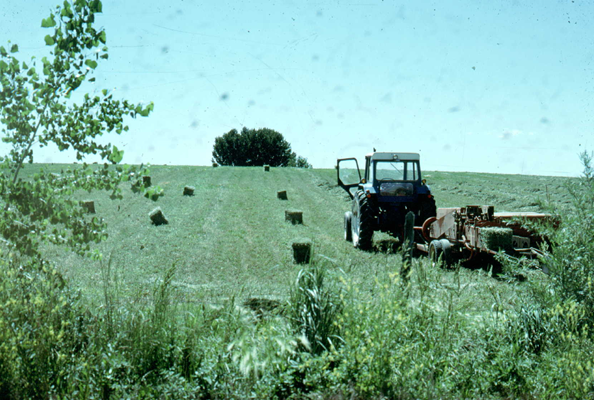 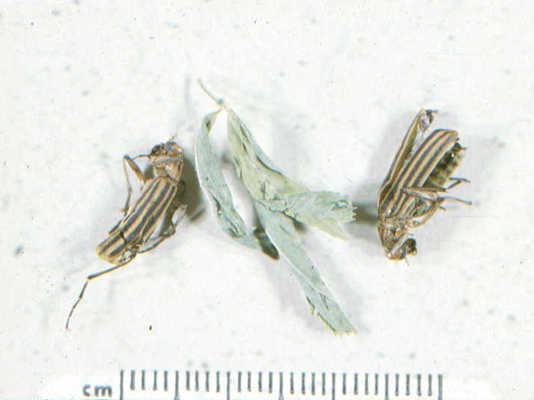 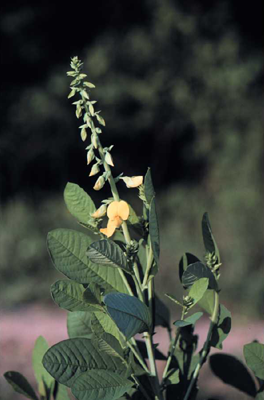 Aflatoxins
Mold toxins are produced by Aspergillus and Penicillium fungi in feed, corn, cottonseed,and milo in the field and in storage if moisture content is above 15%. Aflatoxins damage the liver, may reduce effectiveness of immune function, are known carcinogens in some animals and may harm the fetus. The feed industry is aware of aflatoxins and must sell feeds that contain less than 20 parts per billion (ppb) aflatoxins, the legal limit. Levels above 200 ppb in the diet will likely harm horses. Foals and colts (young animals) are more susceptible to aflatoxin damage.

Fumonisins
Fumonisins are mold toxins produced by Fusarium fungi. Corn is the principal feedstuff involved. All corn should be tested before feeding to horses. Fumonisins cause liver damage, but the outstanding pathology is related to the brain where liquefaction of white matter occurs. The condition has been called “moldy corn poisoning” of horses for decades. The term leucoencephalomalacia (ELEM) is preferred by pathologists; it means softening of the white matter. Horses that consume feed containing more than 5 parts per million (ppm) for two or more weeks are at risk of dying. Onset of clinical signs is usually abrupt, with blindness, running into fences, collapse and violent struggling before death. There is no effective treatment. FDA guidelines state no more than 1 ppm total fumonisins in horse feed.

Coccidiostats, Growth Promoters
Cattle and poultry feed additives classified as coccidiostats and growth promotants include monensin (Rumensin TM and Coban TM); lasaloid (BovatecTM and AvatecTM), salinomycin (SacoxTM) and narasin (MaxibanTM and MontebanTM). Horses are especially susceptible to poisoning. For safety’s sake, it is best they never have the opportunity to eat cattle or poultry feeds and premixes. Heart muscle is damaged and signs of poisoning may include acute death. Sick horses may be off-feed with diarrhea. Heart failure may occur days or weeks later. Generally, if they eat a sufficient amount, the feedstuff must contain at least 80 ppm of one of these compounds for horses to be poisoned.

Antibiotics
Lincomycin (LincomixTM), tetracyclines and perhaps other broad spectrum antibiotics added to the feed for swine and poultry may induce severe diarrhea in horses and rabbits. As little as 15 ppm of lincomycin in the feed may cause this. This often fatal condition is apparently caused by elimination of the normal bacterial flora in the gut and then overgrowth by a clostridium bacteria.

Blister Beetles
These three-striped, pale gray-green or black blister beetles (Epicauta spp.) contain cantharidin, a compound that is an extreme irritant to the mucous membranes of the digestive tract and the urinary system. The striped blister beetle is the one we see most often in first cutting alfalfa from north , and northeast . These beetles feed in droves of thousands, moving from one small area in a field to the next. When infested alfalfa is cut and crimped, the beetles are crushed and remain in the hay. You might see hundreds of the striped beetles in one bale of hay.  Perhaps a dozen or so will induce severe signs of poisoning in a horse. Diarrhea, colic, “sham drinking,” straining at urination, bloody urine, spasm of the diaphragm and weakness are seen. Kidney and heart damage precede death. Cantharidin analysis of urine, presence of parts of beetles in the digestive tract or feces, and dry beetle parts in the hay feeding rack help to identify the cause of illness. Mineral oil or activated charcoal in water by stomach tube may reduce absorption. Supportive treatment, intravenous fluids to maintain kidney function and calcium therapy may be included in treatment.

Toxic Bermuda Grass
grasses may become toxic during late summer and fall. This is uncommon, but the condition has been observed repeatedly from southeast to .  Hay cut in late summer caused numerous cases in horses in in 1997. Muscle tremors, excitability and an incoordinated gait are the primary signs. The toxic hay must be removed from the diet. Animals grazing toxic pasture must be moved or at least offered feed and safe hay. Affected animals should not be handled until they improve, which is usually several days. No lasting effect is expected other than harm from injuries incurred because of the intoxication.

Ergot in Dallis Grass
The ergot Claviceps paspali, commonly found in the seeds of dallisgrass in the fall, can induce signs of nervous system poisoning in animals. Horses generally do not voluntarily eat the ergotized seed heads at pasture, but animals eating the hay may develop tremors. The condition is identical to that produced by toxic bermuda grass.

Selenium in Alfalfa Hay from Region
Alfalfa hay grown in soils where excessive organic selenium is available for plants may contain 30 to 50 ppm selenium. Horses eating this hay for two or three weeks will begin to lose hair from the tail and mane. Changes in the hooves and lameness may eventually develop. Serum selenium levels reflect excessive intake of selenium. Recovery and return of selenium to normal range in the blood may occur within six months once the source of excessive selenium is identified and removed.

Hoary Alyssum (Berteroa incana) in Hay from The arsenic herbicide compound MSMA is a component of herbicides sometimes applied “off-label” to bermuda grass pastures and hay meadows. This is not a legal use of the herbicide. Concern about arsenic residue in hay leads to the question of how much is safe? If there is more than 20 ppm, do not sell or feed the hay. Cattle are very susceptible to MSMA arsenic, horses less so, but we have seen diarrhea, weight loss and kidney damage in horses grazing recently sprayed pasture.

Sorghum Hybrids
These are summer annuals grown for grazing cattle. Label states not to be used for grazing or hay for horses. Spinal cord damage in mares and foal limb abnormalities were noted in the 1960s when this type of forage first became available.

Moldy Grass Hay
Hay may contain a considerable amount of mold which causes a smoke-like cloud when you pull apart the contents of a bale. In other cases the hay smells moldy and the leaves and stems are covered with the velvet-like mold. These examples are not uncommon and probably represent hays that should not be fed to horses although they may not be toxic.

Moldy Legume Hay
Alfalfa hay that was water damaged in the field has caused severe liver damage in cattle. No reports in horses. Sweet clover hay (Melilotus alba) that contains mold within the stems of the plant will cause bleeding in animals, including horses, because it contains the anticoagulant dicumarol. Sweet clover is a roadside weed in the South but is used as forage and hay in the northern states.

Slobber Factor in Legume Hay
In the late spring and early summer, legumes, especially clovers, growing in wet areas often become infected with Rhizoctonia leguminicola, an organism that causes brown patch lawn disease. This fungus produces a unique indolizidine alkaloid called the slobber factor. Horses that eat infected clover develop excessive amounts of saliva. Slobbering may so noticeable as to wet the bedding in a stall during the night! Hay retains the alkaloid and will induce slobbering when it is fed months later. Hay gradually loses this toxic potential.

Singletary Pea, Caley Pea
Lathyrus hirsutus was once planted as a cool-season crop that was plowed under in the spring as a green manure. It is fairly common roadside and field volunteer plant in river bottom soils. On several occasions we have seen horses develop stringhalt in both rear limbs while grazing this plant. Stringhalt is the name of a condition in which with each step the rear leg is lifted very high then the hoof snaps to the ground. Lathyrus sp. (sweet pea) are known to cause spinal cord and nerve damage in people that rely heavily on the peas for their nutrition as do poor young males in India. A weed known as “cats ears” has caused stringhalt in and .

See the discussion above under hays.

Red Maple
Acer rubrum is well known for its ability to poison horses. Other maples may be suspect. Wilted leaves are more toxic than fresh green leaves. Trees or limbs felled by storms, cutting or leaves dropped all at once by an early hard freeze set the stage for poisoning. A pound of the leaves (454 grams) is enough to cause methemoglobin formation in the blood as well as destruction of red cells. Anemia and brown blood that has impaired oxygen transporting capability are early changes. Destruction of red blood cells, reddish brown urine and kidney failure caused by plugging of the kidney tubules by hemoglobin occur in a day or so. Intravenous fluids and diuretics, blood transfusion, injectable antioxidant (ascorbic acid) and supportive care required.

Oak
An occasional horse may eat several pounds of acorns each day for a week or two and develop poisoning caused by gallotannins. This is an uncommon poisoning in horses. Acute colic with severe gastroenteritis is seen in oak poisoned horses. Kidney damage leading to fatal uremia may occur. Make sure your horses have an adequate diet!

Black Locust
Cut-over land where black locust trees grow (Robinia sp) may have acres of saplings a few inches tall. Horses may eat them if nothing else is available. The plant is reported to cause severe gastroenteritis.

Castor Bean  (Ricinus communis)
Horses are easily poisoned by castor beans, the seeds being more of a hazard than the leaves and stem. The plant is used as an ornamental.

Tung Oil Tree (Aleurites fordii)
This is a common tree in parts of southeast , southern and around Deridder. These were areas where tung oil orchards were once commercially farmed for the oil. Any part of this plant is highly toxic to horses although they are unlikely to eat it.

Oleander, Lantana, Boxwood Hedge, Ligustrum, Azaleas
Horses are unlikely to eat these ornamentals. All should be considered toxic to the point that only a pound or two of leaves and stems are likely to cause severe signs. As few as 10 leaves of oleander cause fatal irregularities of heart function. Boxwood causes colic and sudden death. Azaleas and related rhododendrons cause attempts to vomit, weakness and collapse.

Bracken Fern
A common fern found in piney woods areas of the state. Bracken grows in a high, dry environment compared to other ferns. Eating a large amount of this plant leads to a condition that responds well to vitamin B1 therapy. Affected horses have a “wobbly walk,” keep their feet set wide for balance and may appear to be blind. Treatment with thiamine injecting (vitamin B1) can lead to quick recovery if the problem is recognized early.

Crotalaria
This is an important toxic plant! Showy crotalaria (Crotalaria spectabilis) was imported into the state more than 50 years ago. It served as a nitrogen-fixing legume in tung oil tree orchards. The yellow flowers appear in late summer along with large seed pods. The seeds are known to remain viable in the soil up to 60 years. Animals that graze toxic amounts of the plant (probably 3% body weight) die months to a year later from liver failure. Pyrrolizidine alkaloids in the plant may also cause lung lesions in horses. Related plants in the region include Yellow-top or Grounsel (Senecio glabellus), which produces disk-ray flowers containing 13 yellow petals. Not to be confused with buttercups (5 shiny yellow petals). This Senecio is a cool-season weed common to fields, roadsides and ryegrass pastures in bottom soils. Other plants that contain the same type of alkaloids include Hound’s-Tongue (Cynoglossum) and Heliotrope (Heliotropeum). An individual horse may develop a preference for one of these weeds.