Photosensitization in Cattle and Horses 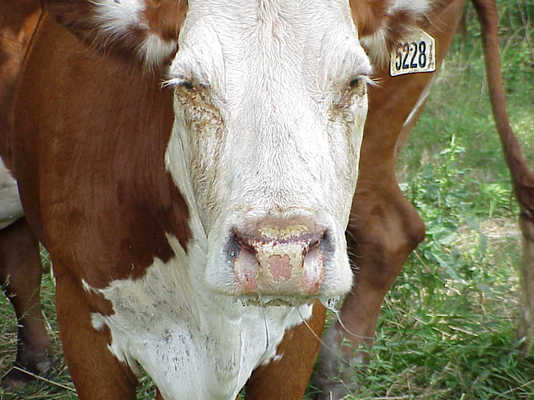 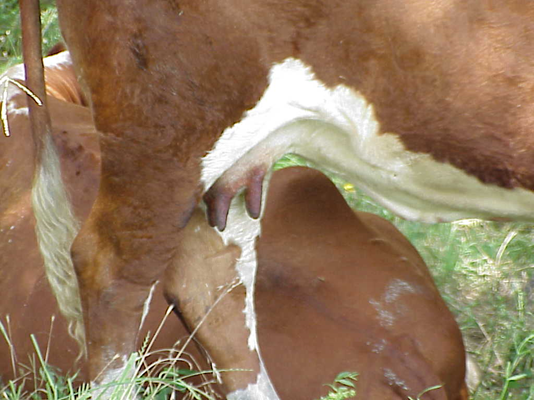 Teats are "burned" and painful.

The sclera or "white of the eye" is yellow or icteric, an indication that liver damage may be present.

Secondary photosensitization occurs when the liver is unable to excrete a metabolite of chlorophyll from forages the animal has eaten.

The metabolite accumulates in the skin and is activated by sunlight. The reaction yields free radicals that "burn" the epidermis. Affected skin becomes wrinkled, and the surface may eventually slough away. Recovery may take weeks. Scarring may be obvious after healing occurs.

Areas most affected include lightly or unpigmented skin, muzzle, ears, conjunctiva, eyelids, vulva, teats and udder. A watery or yellow discharge from the tissues around the eyes occurs. The teats may become bloody and painful.

Photosensitization is not uncommon in cattle on ryegrass during the spring, but as a rule, only one or two of 100 cows are affected.

Horses and cattle that are poisoned by the liver toxins in lantana, showy crotalaria, senecio and bluegreen algae also may develop photosensitization. Lantana is especially troublesome, because this ornamental has escaped from gardens and is well established in many areas of the state. Lantana is found on the banks of most of the canals in the coastal parishes.

Pasture forages such as bermuda and clovers in low-lying fields can become toxic during extended wet conditions followed by hot, sunny days in spring and summer.

"The toxins probably are fungal in origin, and, from previous experience, it appears the affected forage will lose the toxin following the next rain, but hay cut when the forage is toxic will remain toxic," Dr. Steve Nicholson, LSU AgCenter veterinarian, said.

In animals with the condition, unpigmented skin swells, turns red, looks like it’s severely sunburned and will peel. The skin of the muzzle and teats is especially vulnerable, according to Nicholson, who says affected cows may not let their calves suckle.

Animals suffering from photosensitization need shade, water and something to eat. The cause of liver damage should be determined.