Meetings Bring Farmers Together To Consider Options After Storms 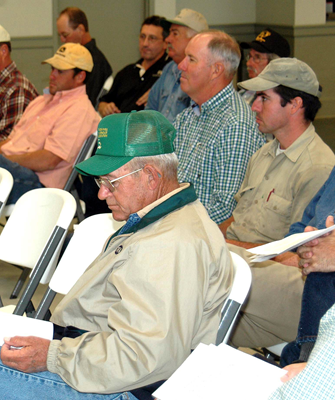 Farmers affected by Hurricane Rita learned about assistance programs Tuesday (Oct. 25) at the Iowa Community Center. This event and several others around the area were organized by the LSU AgCenter and brought state and federal officials together to tell farmers about possible help.

Farmers attending workshops in Acadia and Calcasieu parishes Tuesday (Oct. 25) learned about assistance for dealing with hardships caused by two hurricanes that struck the state this summer.

The workshops, which were organized by the LSU AgCenter, brought in representatives from state and federal agencies to explain the programs available to farmers whose operations were damaged by hurricanes Rita and Katrina. The sessions Tuesday were held in Crowley and Iowa. Similar sessions were planned for New Iberia, Hammond and Raceland over the next few days.

LSU AgCenter economist Dr. Kurt Guidry said the damage to this year’s Louisiana crop production from both storms totaled $1.6 billion, but infrastructure damage will increase that to more than $2 billion.

Guidry said the LSU AgCenter can provide farmers with assistance in making financial plans for the 2006 growing season. He said a hotline, (225) 578-2266, is available for farmers to get more information about the service.

The FSA will pay $55 to $300 for tree removal, depending on the size, from pastures and croplands, and it will pay $40 to $159 per acre for removing water from flooded land.

In addition, farmers who lost at least 30 percent of their crops can get financing at 3.75 percent interest.

Ron Levy, an LSU AgCenter county agent in Acadia Parish, said soil sampling will be done this week throughout coastal Louisiana to determine patterns of saltwater contamination of land.

Also during the meeting, Kyle McCann of the Louisiana Farm Bureau outlined several proposals being considered in Congress to help farmers affected by hurricanes. U.S. Sen. Thad Cochran (R-Miss) is a key player for farm aid, because he is from storm-ravaged Mississippi and chairman of the Senate Appropriations Committee, McCann said.

Bob Felkner of the Louisiana Cattleman’s Association said a program is needed to give farmers immediate help after a disaster.

Felkner said contrary to most accounts, the disaster is not over, and cattle are still being rounded up in Cameron and Plaquemines parishes.

He said donated hay and feed are ample for now, and he said the LSU AgCenter has provided assistance in getting donations. But he warned the supply on hand is not enough for the winter.

"Sometime in the near future, we’re going to run out of resources," he said.

In another aspect of the meeting, John Pierre, vice chancellor of the Southern University Law School, said the university offers a mediation program to settle disputes as a way of avoiding lengthy, expensive litigation. The free service can be used to solve disagreements between farmers and insurers on the amount to be paid for damage.

"The dispute is resolved only when everyone agrees," he explained. If mediation fails, then litigation remains an option, he said.