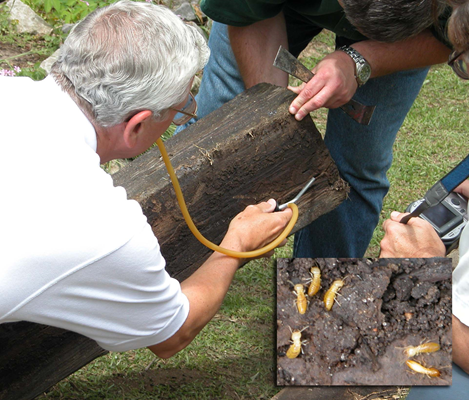 AgCenter associate Charles McCown, left, uses an aspirator to collect termites from the bottom of a railroad tie at the site where Formosans were found in Pineville.

LSU AgCenter entomologists confirmed this week that termites found last week at a home in Pineville were Formosan subterranean termites – the first sighting of the pests in the Alexandria area.

The termites in question originally were discovered and reported by workers from a pest control company conducting a routine inspection of the house and grounds on April 21. LSU AgCenter entomologist Dr. Dennis Ring and other AgCenter personnel visited the site to collect samples Friday (April 23) and soon confirmed the termites were Formosans.

"These termites pose a greater threat than the native species because they form larger colonies, are more aggressive and form carton nests above ground," Ring explained. "Their nests may contain termites that number in the millions while native termites have smaller colonies."

Sometimes referred to as "supertermites," Formosan subterranean termites, like the native species, eat wood, paper and other cellulose products. The difference is that the Formosans can do much more damage in a smaller amount of time because of the larger size of their colonies.

Ring said a visible difference between native and Formosan subterranean termites can be determined by comparing the heads of the soldiers – the termites with big orange heads – in the two species. Another way is to look at the veins on the wings of swarming termites, when those are present, he said.

To help minimize termite damage, homeowners are advised to check near their homes for termites in all wooden structures and trees – especially the untreated wooden items that have wood-to-ground contact such as fences, landscape mulches and landscape barriers like railroad ties or utility poles.

The Formosans in this instance were found in railroad ties, stumps, live trees and landscaping timbers at the site in Pineville. They were first discovered by a pest control employee who was making a routine inspection of a bait station placed near the residence in Pineville.

Once the pest control company suspected an infestation of Formosan subterranean termites, the Louisiana Department of Agriculture and Forestry and the LSU AgCenter converged on the site to confirm the identification and make suggestions for control of the pest.

Swarming is a part of the reproductive cycle of the insect where winged termites fly out of the nest, mate and try to start a new colony.

"They can fly up to 1,700 feet while swarming," Ring said. "They expand their range slowly on their own, but they travel distances with the help of humans who move railroad ties, used wood, potted plants or any untreated wood and paper. They even have been moved in boats."

Ring said homeowners in infested areas may observe the swarming insects as they begin to fly this spring. And he stressed the importance of not moving material that has been infested.

"It is crucial that infested wood or paper not be moved," Ring said, cautioning, "It should be burned or treated and moved only after all termites are dead."

Formosan subterranean termites are believed to have been brought into the United States after World War II on shipments from the Pacific. They are mainly concentrated in port cities around the Gulf and on the East Coast. In Louisiana, they have long been found in New Orleans and Lake Charles. They also were accidentally brought to the Monroe area and to Sabine Parish a few years ago and have been found to be gradually moving north from the Gulf into other areas of the state.

Experts from the LSU AgCenter offer these tips for controlling termites: