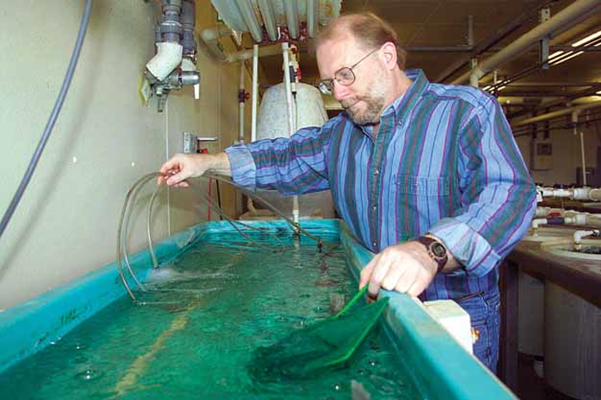 Cryopreservation research in Terry Tiersch’s laboratory includes work in the hatchery (above), laboratory and field. (Photo by John Woznaik)

The aquaculture industry is looking increasingly to genetic improvement for gains in production. But improving the genetics of aquatic species can take a long time. With catfish, for instance, a male typically spawns with only one female each season. Even if genetically superior males and females could be identified, the process of developing breeding stock and improved lines could take a decade or more.

Fish sperm were among the first cell types successfully maintained through cryopreservation -- the technique of freezing cells at extremely low temperatures so they remain genetically stable and metabolically inert. This research, published 50 years ago, coincided with similar successes with domestic livestock. In the intervening years, a multi-million dollar global industry has developed for frozen livestock sperm while cryopreservation of aquatic species sperm is just now on the verge of moving from the laboratory to the market.

The benefits of cryopreservation in aquaculture species include the following:

1. Cryopreservation can be used to improve hatchery operations by providing sperm on demand and simplifying the timing of induced spawning.

2. Frozen sperm can enhance efficient use of facilities and create new opportunities in the hatchery by eliminating the need to maintain live males.

3. Valuable genetic lineages, such as endangered species, research models or improved farmed strains, can be protected by storing frozen sperm. This could be critical for marine species such as shellfish, where valuable broodstocks must be stored in natural waters.

4. Sperm can be used in breeding programs to create new, improved lines and shape the genetic resources available for aquaculture operations. A dramatic example of this is in the dairy industry, which relies almost entirely upon cryopreserved sperm to produce improvements in milk yields.

Artificial insemination entails the collection of sperm and eggs so one male can fertilize eggs from several females and one female's eggs can be fertilized by sperm from several males. This can lead to a matrix where a group of select males can be mated with a group of select females to develop populations with distinctive traits. By having assayed the parents for genetic markers, the industry can develop broodstocks with enhanced characteristics, such as growth rate, disease resistance or vigor. Such a process can also be used to cross two different species (for instance, blue catfish and channel catfish) to develop a new strain with hybrid vigor.

The process could also be used to develop triploid oysters by fertilizing diploid females with sperm harvested from tetraploid males. The results would be triploid offspring which would be sterile, allowing them to convert energy to body mass instead of reproduction. This could extend the harvest season.

The dairy industry provides a business model for developing an industry for cryopreserved sperm of fish and shellfish. In addition, this industry can provide equipment, protocols and facilities. We have worked for eight years with Genex Custom Collections, Inc. and the LSU AgCenter Dairy Improvement Center to adopt for use with aquatic species the infrastructure developed for dairy bulls. Other challenges include biosecurity concerns related to sample transfers, pricing structures and product quality control issues.

Another model for developing repositories for genetic resources comes from the newly formed National Animal Germplasm Program (NAGP) of the U.S. Department of Agriculture. The NAGP is patterned after the well-established USDA National Plant Germplasm System. NAGP has committees for animals such as beef and dairy cattle, swine, goats and sheep, poultry and aquatic species. The Aquatic Species Committee brings together members from universities, industry and federal agencies. The LSU AgCenter is assisting the transition from cryopreservation research to application through work on protocol standardization, gamete quality, sample labeling and database development to provide a repository to protect genetic resources, including endangered species, and to assist in developing existing and future industries for culturing aquatic species.