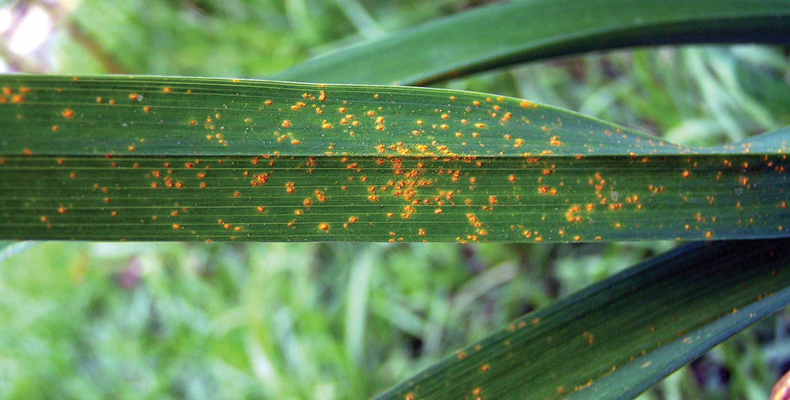 In the summer of 2000, daylily rust was reported for the first time in the United States. It has since spread across most of the country and continues to present problems for home gardeners, commercial landscapers and daylily growers. (Photo by Gordon E. Holcomb) 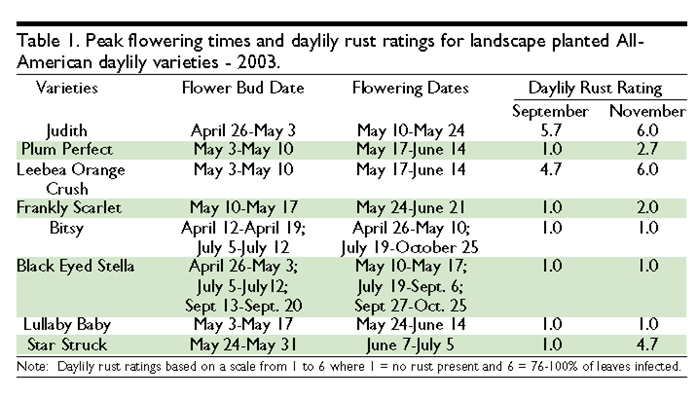 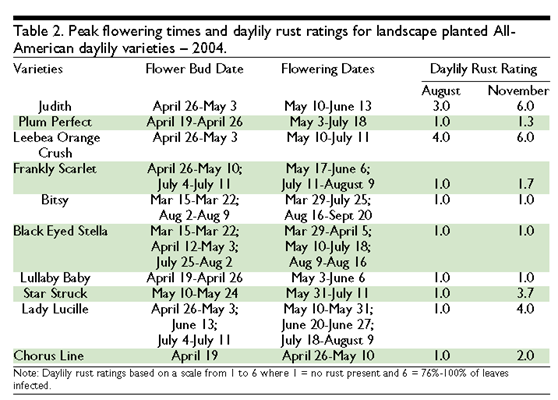 Interest in daylilies is still strong despite rust problems over the past several years. New daylily selections and All-American daylily winners need to be evaluated in the Gulf South for landscape performance.

A landscape trial evaluating the performance of All-American daylily cultivars – cultivated varieties – was initiated in 2003 at the Ornamental and Turfgrass Research and Extension Facility located at Burden Center in Baton Rouge. The All-American Daylily Selection Council has named All-American daylilies annually since 2002. The winners are Chorus Line (2004), Lady Lucille (2004), Frankly Scarlet (2003), Plum Perfect (2003), Bitsy (2002), Judith (2002) and Leebea Orange Crush (2002). Winners named before 2002 include Lullaby Baby (1998), Starstruck (1998) and Black Eyed Stella (1994). Winners from 2005, Red Volunteer and Miss Mary Mary, have been added to the Burden Center planting.

Bareroot daylily plants were planted in February 2003 in a 4-foot-wide raised landscape row composed of an Olivier silt loam soil. Winners from 2004 were planted in spring 2004, and 2005 winners were planted in fall 2004. Plant beds are located in full sun, and plants receive irrigation from a drip system as needed to prevent stress during the growing season. Plants are individually spaced 24 inches apart and include three to five plants per variety. Rows are mulched annually with three to four inches of baled pine straw. StaGreen Nursery Special 12-6-6 fertilizer at the rate of one pound of nitrogen per 1000 square feet is applied annually in mid March and at the rate of a half pound of nitrogen per 1000 square feet in early June. Plants are not dead-headed or pruned during the growing season, and no insecticides and fungicides are applied for insect and disease management. Weeds in the trial beds are removed by hand and control is supplemented with twice-a-season applications of granular herbicides.

Visual quality ratings were made weekly from mid April through October in 2003 and weekly from mid April through mid October in 2004. The visual quality ratings included growth habit and flowering, with favorable growth habit being compactness, foliage color, uniformity and overall aesthetics, and favorable flowering being longevity and visual appeal. Flower observations were made in regard to time in bud and peak blooming periods (Table 1 and Table 2). Daylily rust ratings were taken in September and November 2003 and in September and November 2004.

Visual quality ratings were average to above average for all cultivars through the 2003 and 2004 growing seasons. Peak performance seemed to be from about the time of bloom initiation in early May through August. Foliage decline and daylily rust appearance began in mid to late summer both years. Flowering observations in 2003 and 2004 indicated that Black Eyed Stella and Bitsy were the varieties showing the most repeat bloom potential (Table
1 and Table 2).

Daylily rust was observed on some cultivars by late season in 2003. Rust was most severe on Judith and Leebea Orange Crush. Starstruck had rust symptoms in November but no symptoms in September. Plum Perfect, Frankly Scarlet, Bitsy, Black Eyed Stella and Lullaby Baby were least susceptible to daylily rust (Table 1).

Daylily rust was noticed for the first time in 2004 during the late sum-mer, with Judith and Leebea Orange Crush being most susceptible again. By November 2004 significant rust was also present on Starstruck and Lady Lucille (Table 2).

Previous research at the University of Georgia has found Plum Perfect and Frankly Scarlet to be resistant to daylily rust. Black Eyed Stella has been class-ified as moderately resistant, while Judith, Leebea Orange Crush and Chorus Line have been classified as susceptible.